Carmen and I had Couples Counselling over the past few days.

As you know, Carmen and I have been having good sessions and bad sessions. Sometimes explosive sessions. I've been feeling that we're in a bit of a spiral but was unsure how to approach it.

However, a few weeks ago my friend Karen had kindly offered to bring me Johanna Beattie Batista for a few days. Karen wanted to get her stallion out and about (more on his visit in another post). I had thought that it would be all about working out a saddle fit and riding.

Karen and Johanna arrived Tuesday late afternoon. After a brief conversation and looking at saddles we brought Carmen up to the ring and I began to lunge her. It was not our best work but it wasn't our worst either.

Apparently, Johanna asked Karen if she thought I'd mind if she took over. Karen assured her I'd be fine. I didn't know this at the time, of course. But when Johanna asked if she could take over I readily agreed.

I watched Carmen and Johanna work together. Initially, Carmen was quite resistant to anything Johanna asked and threw a few tantrums. Quietly and imperceptibly I watch Johanna work with her until she was calm and quiet. Johanna then asked me to come back. She was very direct. (by the way I like direct).

You are making it too complicated for her. She is not a leader and she needs a leader. You need to make it simple. There was more but I won't try to quote her as I'll get it wrong. Instead let me tell you what she explained:
I was being too tense and excited which was making Carmen worry. I wasn't providing enough leadership, which was making her worry more. I wasn't a safe haven, instead I was a source of stress for her.

That night I did a lot of thinking. I realized that Johanna was correct- I was being too tight. I knew that I had not been like that with Steele. I realized that I was holding my emotions in tightly and they were leaking out all over the place like sand being held too tightly. I spoke to Karen and she gave me some ideas for grounding. They helped but what I needed to do was to try to prevent my pain over Steele ruining my relationship with Carmen. It wasn't her fault. I realized that overtime I was up by the ring my brain was dwelling on the field that was where Steele ran to get away from the dogs. If my attention was on that no wonder I couldn't be a leader to Carmen.  gave myself a shake and got ready for our next lesson.

Johanna spent the next two days helping Carmen and I communicate.

The next day our lesson was late in the afternoon after work. Breathe I told myself over and over. I loved that Johanna let me start and stayed on the side lines. She gave instructions but let me also have the space to try to figure it out as well. 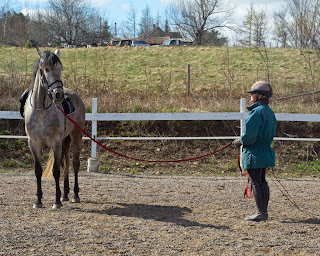 I love the story that this tells you. This is the beginning- Carmen and I clearly want to talk to each other but aren't sure how. As a result we are both tense and a bit wary. 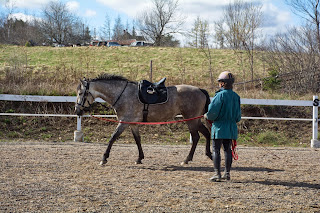 A lttle later on. We are much more relaxed. My breathing and easing my shoulders is having an obvious effect on Carmen. Look at her head - it's lowered, her back is not stiff and her tail is relaxed. Her eye is soft.

As we moved down the ring Carmen suddenly reacted- which made me react which made her try to run away. Quick as a wink, Johanna was in there and took over.
See that expression ?  she said. (it was is known as a classic mare face- hard eye, stiff nostril and essentially haughty.
yes I said.
That spells trouble. You can't let her get that look.

Great,I thought, how the hell do I do that?

Within 2 minutes Johanna had Carmen back on the job. She gave her back to me. I went back to work breathing, being clear in my intentions. Carmen began to stop at one point and I simply told her to trot on- oh okay she said and that was the end of that. 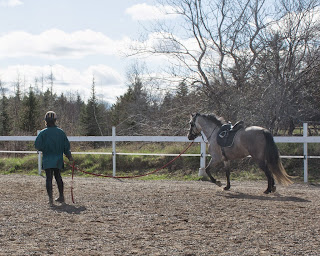 Here I am helping her to canter on. I'm not looking straight at her but ahead so that she doesn't feel threatened. But I still had to know exactly what she was doing and breathe and relax.

When I had Carmen stop Johanna told me to 'gather her in'. With my back turned I slowly gathered up the lunge line. Carmen slowly came up behind me and stood waiting for me to indicate what were doing next.

(What we were doing next was ride but that's for an entirely different post.)

The next day I was off. I let the horses out for a bit and then put a halter on Irish to take him out to graze. Normally when I do this Carmen throws a fit, even if we're just 20 feet away. This time she went to her stall, whinnied once and then stayed in there. After about 15 minutes she calmly moseyed out and began to graze well away from us. I was amazed.

then it was time for our next therapy session lesson.

The pictures speak for themselves: 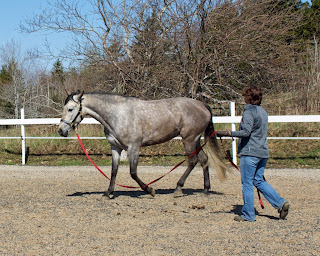 This was the start of our work. You can see that both of us are much more tuned into to each other and more relaxed about the whole thing. 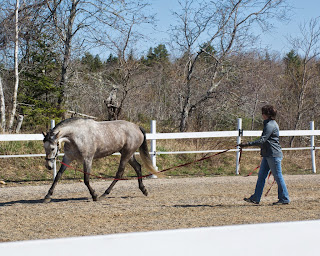 My favourite photo- look at her stretching over the back. She is fully tuned in and not at all looking around. Look at my body posture- I am calm and centered.

I was thrilled with our progress. And I was able to focus on Carmen and not the field behind us.

After lunch Karen and Johanna left (I will tell you about her stallion too but not right now). My friend Cynthia had come to watch and she got Irish ready to ride. Poor Irish had been feeling a bit left out of the clinic excitement.

When Irish left Carmen hung out with me in the barn. She would whinny softly if she couldn't see me but when I answered she was happy. After I cleaned a bit I put her halter on and we wandered up to the ring. She softly cropped grass while Cynthia rode. I had a loose lead line and even leaned against her for a bit. She didn't move away. After a bit we went into the ring because I wanted to talk Cynthia through riding a square. While I described what to do and coached her through it Carmen stood behind me happily and calmly waiting for me to decide what was to happen next. She occasionally snuffled the back of my shirt and my neck.

As I felt happiness and peace settle into my heart I could swear that I felt two noses on my back but when I looked back it was just Carmen. Looking at me softly.