Where does the time go

Steele had a birthday on Nov 22.


Now he's under saddle and looks like a real grown up horse. He took to being backed like he'd read the books too. I rode him today for the first time in a week. With the weather it's been too hard to ride on the ring, but today was warmer so it had thawed. He felt the same as when I was riding him 4-5 days a week. In fact, when we cantered he felt the most balanced ever. His is sensitive and can react but he prefers to be mellow. As long as I relax on him he settles into work like a much older horse. I've been asking him to leg yield but today we trotted down the quarter line and when I asked him to move over he just did. Like it was no big deal. So it wasn't.

Now I know that 4 is not truly grown up yet. He has some more filling out to do and his musculoskeletal development to occur.  He will have some time off over winter but I'm not worried. There's still stuff for me to do with him- including introducing him to being ridden in the snow.

And plan out our show season.

There are not just horses on Oakfield Farm. I also have two beautiful dogs: 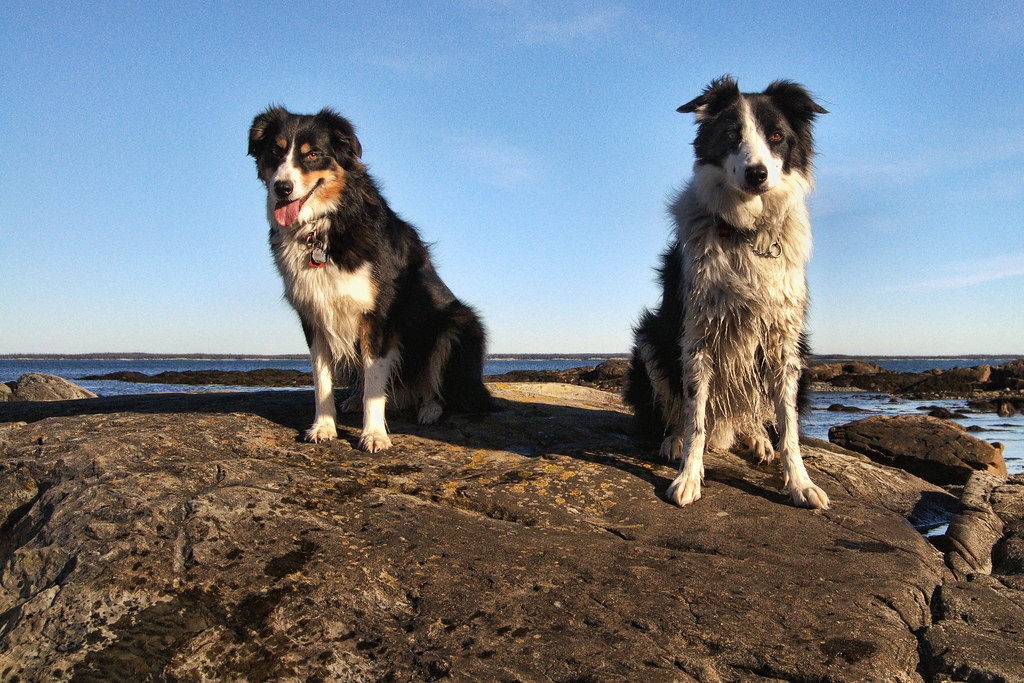 Belle on the left is pure princess. d'Arcy on the right is always looking for a job. Mostly he thinks it's to monitor the horses. Often d'Arcy seems like a well intentioned, over-enthused goof.

Irish wears bell boots because he has a habit of pulling off his shoes in the field. So instead of hunting for shoes (as much) I spend time looking for bell boots. Last year I got the idea that I should train d'Arcy to find them for me.

Here's a video of this:

Brilliant right?
But can you spot the flaw? With the way he shakes the boot it's a bit of a problem. However, I figured that we could work on that. However, after this day I mostly got sticks. He was just as cheery and enthused but ran over the boot to find the stick. So I gave up and decided to buy brightly coloured bell boots instead.

When I do my night tuck in the dogs always come out with me. When I came back in the house d'Arcy was not there. I called but he didn't come right away. I went in the house figuring that he'd come back soon enough. But he didn't. So Ed and I were out trudging in the rain calling him. He finally came back. I have no idea where he was but I was not impressed.

Today when I brought the horses in for supper I saw that Irish was missing a boot.
Damn it he just got new shoes
With trepidation I lifted his foot.
phew
His shoe was still on. Just the bell boot was missing. I figured that there was just enough light to look around the paddock for it. d'Arcy came with me with his usual enthusiasm. As we walked I decided to give it a try so I looked at him and said 'find it'

He looked at me and then began to zig zag back and forth. After a minute he stopped, looked at something and then back at me. He then ran off. I saw the bright green bell boot.
"That's it! Good Dog!"
He stopped and returned to the bell boot, picked it up and brought it back to me.

Maybe he is a genius after all.

Here is where we stayed for much of our vacation- my Aunt and Uncle's house which is made up of modules shaped like hexagons:
As much as I had on our vacation (and I had a ton!) I missed my animals. And I really missed riding. When we got home saturday was cold (-4) and given the temperatures that we had just left it felt really cold. However, today was 8 (celsius) and the sun was shining. I was excited because that meant I could ride. I sent a text to Cynthia and enticed her to join me.

Before she came I dragged the ring and put away the drag for the year. I can always get it out again if I need it but I didn't want to leave it to get frozen to the ground. When Cynthia arrived Steele came down to say hello. I put some carrot peelings in his dish (thanks Cynthia!) and he came right into his stall. I closed him in. With a sigh Irish followed.

Since it had been over 3 weeks since I last rode I decided that it would be prudent to do some ground work first. It's not that I expected him to be wild but I wanted to re-establish our working relationship from the ground first. He stood very still while being groomed but moved a bit when I tightened the girth. I think I was too fast and surprised him. I went to put the bridle on but when I took off the cross ties he tried to go to Irish. I corrected him and he stood and took the bit like he's supposed to.

When I brought him into the ring he swung away to watch Irish come up the hill. It would be easy to ignore that but I went around and moved him back to where I wanted him to stand. With a sigh he stood while I prepared the lunge line. I started with some turns on the forehand and backing up. I then put him out on the circle to work.  He was looking around and was obviously fresh but he listened to me and as we worked I could feel us connecting back together. At no time did he pull or try to run away. Twice he indicated that he was going to stop and reverse but I know his signals so I got on him before he could be successful.

After about 5 minutes I decided to get on. I lined him up at the mounting block and off we went. I was so impressed with him. I had my first ride on him on May 3 of this year (6 months ago), he just had 3 weeks off and I wouldn't have known it from his behaviour. He responded to my aids really well- better than I deserved with some. There were a few times when I could feel him tensing up and getting ready to spook but I just tightened my core and breathed and he relaxed right back to me. I have to say that I could truly feel him looking to me as a leader as his rider. This has been growing but today I felt like it was there. I rode for about 45 minutes and decided to call it a day.

I was quite happy to be back in the saddle and he seemed to be quite content about the whole thing too.

Did you miss me? Or more accurately, Steele and Irish?


Ed and I just returned from a 3 week vacation. It was one that we have spent a year planning. I'll give you a hint:

That's right- we went to Australia! I've always wanted to go and the trip did not disappoint. I have 100's of photos, which I may subject you too over the winter (you have been warned). On the way home we stopped in Hawaii for a few days. That was a magical place.

A trip like this is only possible when care can be arranged for the critters. Fortunately our usual 'sitter' was willing to do three weeks so that we could go. It was wonderful to not have to worry while being so far away. Ed and I spent the days before trying to make sure that we had in all the supplies she would need. We did okay- there was a bag of shavings and a half-bag of feed left.

We returned from heat to winter weather. While it was hard to go outside in the cold this morning I loved coming back to the barn and having my morning with my two guys. Irish was funny- he refused to look at me this morning. Steele ignored me as well. I didn't worry about it. Tonight I brought them out and gave them a good groom. By the end Irish was back to his snuggly self and Steele was feeling good. I'm hoping that I can get a few rides in before the winter freeze really hits.

While I was away I did manage to get to a tack shop. I'll give you two guesses what I bought.