Down the Rabbit Hole

A couple weeks ago I wrote about Carmen and I playing with liberty work. We had also done a little bit back in August. There was a marked difference between January and August. The difference, I think was me. In August I had a lot of idea and direction and probably put a bit of pressure on her (not that that is necessarily a bad thing).

I've been wanting to try this again, tackling it the way I did in January- with zero agenda and more about being with Carmen then directing her. The weather took a marked turn towards bitter cold and I didn't even think about doing anything until it began to warm a bit this weekend. Not that we were as cold as out west. At -40 I think I would just become a whimpering blob on the floor.  Our temps were more like -15. Cold as hell but not the ninth circle of hell.

Monday is a holiday here in Nova Scotia and since I don't work fridays, it made it a four day weekend for me.  Friday was still pretty cold so I consoled myself with baking a cake. But Saturday was a lovely day. I wanted to exercise Carmen a bit as well since she's not terribly motivated to run around the field on her own. She was eager to go to the ring and seemed to enjoy stretching her legs. I then slipped the halter off and decided to play a bit.

Guys, this is so cool. Carmen had complete and utter freedom but she stayed with me. Wherever I walked she did. I even played with small circles and large ones. I would turn to her haunches and she would yield her hindquarters. If I 'leg yielded' to the right she would go that way - which makes sense because I was going towards her. But she also followed to the left. 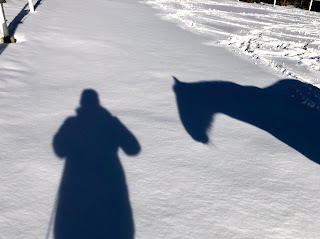 Carmen's attention was grabbed by something in the next field and I walked up to take a look. She followed behind me. We stood there and she raised her nostrils to sniff. I lifted my head too and sniffed. She looked at me, then totally relaxed.

We went up to the mounting block and she lined right up. I hopped down and left but she didn't follow. When I turned to her she was looking at me with a 'well, are you getting up or not?'. She stood there for the longest time so I went back and stood on the mounting block. I hung over her back and she nudged me with her nose- no, that's not right. stop fooling around. So I tried to get on. But my 50-something body, Carmen's height and the height of the mounting block make it impossible. I did really try and then fell. Carmen just looked at me and sighed. 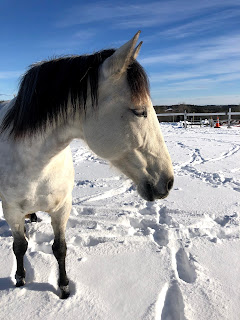 Sunday I did more with her. I could have ridden but I was just curious to know if the day before had been a fluke. And at first it seemed like it was- she seemed more tense and less engaged. I then realized I was being tight and so I took a breath and began to relax. It was like flicking a switch. She became instantly tuned in. I set my phone up to take a little video. I am sorry for the poor quality but you can see her stay with me.

I sat down to see what she would do. All she did was drop her nose and hang out with me (you can see Guinness too trying to join in the fun).

Today was a stunning day weather wise. It was sunny and close to zero with no wind. It felt glorious. This time I tacked Carmen up and we went to the ring. I played with the liberty first and asked her to line up at the mounting block. This is what she did: 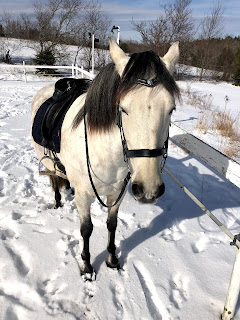 She simply stood there. She didn't leave and she didn't get tense. She napped.  I did more walking around the ring and this time when I came back she lined right up. I didn't even pick up the reins when I mounted. The footing was a bit slick from the melting so we were just able to walk. I spent most of it on a long rein seeing if she would stretch into it. Carmen got a bit excited once by something down in the woods but settled right back. I don't think I rode for long but it was nice to just sit there.

Honestly, I look at the things I'm dong with Carmen and I wonder 'who are you?'.  I feel like I took the red pill and am in a strange new world (at least that's a movie reference this time). I am exploring territories I never really knew existed. And it's so much fun.
I literally have no knowledge of liberty work. None. All I'm doing is looking at Carmen and reading her body language. I am offering her some things to do but it is totally up to her to make a choice. Right now she's choosing to stay with me.  (Although, I wonder if she will be so connected once the grass comes in around the ring.) I'm taking a leap down the rabbit hole and I have no idea what's at the bottom.

Living in Canada means that winter is a solid 4 months with the shoulder seasons being pretty chilly as well. It has always been important to have gear that can keep me dry and warm when the temps really start to dip. I've had quite a few coats and vests over the years. My biggest peeve with warm winter coats is that they are very heavy and awkward for riding and doing barn chores.

Last fall I was out shopping with some friends and we went into the Columbia Outlet store (sidenote-I love this store for its quality and prices).  I was looking through the racks of winter coats and found this little gem:

It's a 3-in-1 jacket. The outer shell was waterproof and the inner one had the 'omni-heat thermal reflective lining'. And it was on sale.  I think I paid about $150 for it, which is awesome for a good winter coat. I've had this coat now for about 3 months and I LOVE IT.

It is the warmest winter coat I've ever owned. Most of the time I only wear the inner jacket and I am sweating. The inner coat weighs as much as a light rain jacket. It is ridiculous how warm it is given how little it weighs. I bought a large size and it is quite roomy for riding. My arms do not get pinched and the length is perfect. Most of time when I ride in it I am only wearing a single layer underneath.
Until recently  I have just used the outer shell as a rain coat. I didn't think it would be waterproof if you were out in a long time in a downpour but today we're having torrential rain and it has kept me dry.
The few times I have worn both layers have been when it's below -10 (Celsius) and I usually end up having to unzip a bit because I get warm. 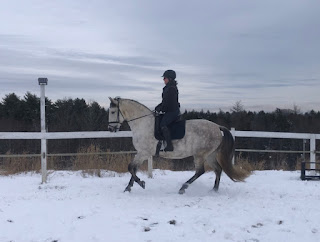 So if you are looking for a coat that is good for riding and for barn chores I would recommend this one.