The weather this weekend was beautiful- warm and sunny. Not "its not bitter cold so I'll put on four layers so I can sweat and convince myself that it's warm" but actual t-shirt weather.

Irish and Carmen have been soaking up the sun. The grass is also starting to turn green.  The pasture needs more growth before they can go on it. This doesn't stop them from searching out every stray blade that pokes its head out.  It's a 'hunt and peck' approach to grazing that shows how dedicated these creatures can be.

The hay that I put out is pointedly ignored.  'It's so last year' they seem to say.

I started taking them out for some hand grazing on the lawn.  Today, after Carmen and I were done in the ring I brought her out to graze.  She dropped her head and focused on her task- stuffing as much greenery into her mouth as fast as possible.  She stopped once- Ed let the dogs out and d'Arcy came to see us. When she saw him, Carmen stepped ahead of me. I was going to correct her but I realized that what she was doing was putting herself between me and the dog.  Bless her heart- trying to protect me.

Irish was not impressed with being left in the paddock.  He swung his head, he kicked out, he paced and tried to dig under the fence.  Carmen ignored him completely.  After 15 minutes I put her in the field and called Irish.  He came up running, brushing by Carmen to make her move.
Jerk.
I let him at the grass and then put him back in his field. For the rest of the afternoon, every time we walked anywhere near the field he ran to the gate waiting for us to let him out.  He became progressively annoyed when we didn't open the gate.  He would return to his hay pile, angrily snatch at his hay and glare.

At supper time I headed out to feed them they were hanging close to the barn as usual.  I put fresh hay in Carmen's stall and she came in to say hi.  I went to get Irish's hay and spied him outside Carmen's stall.
'Don't even think of it' I growled.
With a defiant look he kept in her stall and she took off.  He followed her out and chased her into the field.

Muttering, I filled Irish's hay rack.  I stepped outside and Carmen came back. She gave me a look and ran into her stall. I closed her door.  When I turned Irish was there looking at me.

'You know sometimes you can be a real ass'
He made this noise with his nose- frankly it sounded like a raspberry to me. 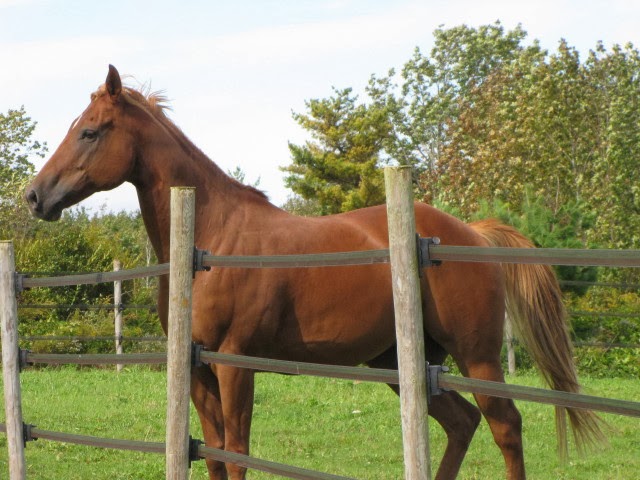