Many years ago I used to think that lunging was about burning energy. I have learned that it's not really about that. It's about getting a horse's attention and obedience (for lack of a better word). A hot horse will always have more in the tank (even if it kills them). So, for me, lunging is not about working the body primarily but about the mind.

This was brought home to me this weekend.

Dr. Jekyll:
Saturday was a sunny, although cold, day. I wanted to work with Carmen in the ring before we left for our big date in the city so I did my chores fairly quickly. I wanted to test her a bit with some new stuff so I brought in a cavaletti and a old blue horse blanket.

I brought her in, snapped on her lead line and we headed up. Irish was loose in his paddock and followed us up. Carmen followed like a nice broke horse. As soon as we came to the ring she noticed the blue blanket but didn't do anything. As we went to work she was completely focussed and 'on'. We lunged by the blanket- I didn't ask her to go near it, just work with it near by. After a bit she ignored it. I lead her over the cavaletti and then lunged her over. It was all no big deal. She obeyed every command and I could find no fault.

We finished up with her following me over the blanket.

To say I was thrilled was an understatement. I let her graze and then brought her to the barn. She stood in the cross ties without fuss (even though Irish was no where in sight) and when I turned her out she was reluctant to leave.

I felt really really satisfied with our session.

It's a good thing that I didn't have a crystal ball....

Today was hot and sunny. The temperature more than doubled since yesterday. My friend came out to ride Irish. I wanted to try some different padding under the saddle but didn't plan to 'ride'. I wanted to repeat the ground work from yesterday and then walk her out with me riding.

The horse I had today was NOT the horse that I had yesterday. She was distracted, spooky and unable to listen. There was lots to distract- cars on the road, waving grass and an ATV in the next property. But all these things she's had lots of time around since she arrived. She bolted twice on the lunge line but I just kept working with her asking her to come back to me. I worked on ensuring that the wrong answer led to more work and the right answer led to a break. And it seemed to work. After a long time she finally seemed to be tuned in.

So I took her over to the mounting block and asked her to stand. This took two tries (red flag that I should not have ignored).

I got on and we started to walk. She didn't seem bothered by the saddle but she was not impressed with the idea of being steered. She wanted to jig and gawk and generally was being annoying. I kept trying to occupy her brain with lots of changes of direction. She gave a big spook and we did a one rein stop. As we walked on Irish was in front and he turned left. I turned right.

That's when she threw a hissy fit. I'd love to describe all that happened and how I reacted but frankly I can't. All I know is that I had a leaping, spinning, twisting creature underneath of me and how I stayed on I have no idea. I was sure I was coming off at least 3 times but always managed to stick. We finally came to a stop.
"Are you okay?" asked Cynthia.
"yes. But I wasn't sure that I was going to stick."
"me either"

I realized that I hadn't truly had her focus or attention. So now it was time to get it.

I dismounted and put the lunge line back on her. Suffice it to say that I worked her butt off. The task was to do what I say, when I say it. She tried to follow Irish and bolt off again but I was having non of it.
We were working. Now.
And I was as clear as I had to be to make my point. This meant that if I said to move and she didn't I smacked her with my whip and got her feet moving. She did not take to this. But I wasn't beating her around (don't call PETA). I was making sure that there was no doubt what I wanted and no doubt as to who's opinion mattered in this moment.

I would give her opportunities to stop and rest but if she walked off her butt went back to work. Finally she stood still, looked at me and bobbed her head. I don't know what that head bob means (if it means anything) but whenever a horse has done that to me it always seemed that I had their attention and respect. I then started walking making sudden and random changes of direction and stopping. Her job was to stay with me. She became distracted once and tried to move off. Back to work we went. It didn't take long for her to say 'okay okay. I got it'.

By now Cynthia and Irish were long done work and were sitting there in the sun. I walked over, took off the lunge line. I had one more point to make.

I led her away from Irish and to the mounting block. She stood still when I got on. We spent 30 seconds walking and halting and then I got off. As I stood there talking to Cynthia she nuzzled me.
So much for worrying that a horse won't like you if you're firm.

We walked down to the barn with me stopping periodically and backing up. She was perfect.

She was also sweaty. I figured it was as good a day as any to see what she thought of the hose. I brought her out and turned it on. She got immediately tense but as soon as it touched her she sighed and relaxed. She quite liked it and was even drinking out of the stream. I had grazed her while she dried off and then we went into the barn. Just as we walked by a few hay bales tumbled down and landed on some feed bags. Carmen spooked in place. I could tell that she wanted to run but knew she shouldn't. I gave her a pat and put her away.

There are lots of potential reasons for why she exploded on me today: saddle, weather, Irish, the alignment of the stars. I may never know. It could be that she just wanted to test and see who was truly in charge.  But I needed to make my point- she needs to be clear as to who can be bitchier- it's me.

I'm also glad that some help is coming this week to help us get on the right path. 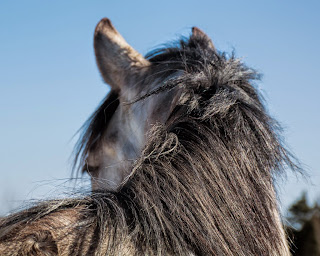