The positive changes in Carmen are continuing.  We are now regularly working on training stuff,  not just me convincing her that we won't die in the ring.

I allow her to have rein so if she wants to bolt she can.
And do you know what?
She doesn't.

It's not that I don't shorten the rein. I do but it's to achieve a turn or a bend not to stop her from running away.  When I feel her getting tense I have to override my instincts to tighten my legs and hands but it's getting easier. When she does spook I get us back under control pretty quickly.

Friday was a good ride.  It was warm and misty.  While I was lunging it started to rain.  I decided that I didn't care, we were working anyway.  She was distracted a bit but not too bad. When I got on she was listening right from the start. After confirming that she was listening I began some serious work on transitions.  If Carmen agrees with the transition it's pretty smooth. But if she has a different idea it's pretty rough. I don't worry or fuss over the initial trot transitions- I've accepted that there will be some hesitation and discussion. Instead I just sit quietly and keep softly asking until it smooths out. I then give her verbal praise and we carry on. If I try to just get her to go forward she worsens. If I simply ride she gives up. This testing behaviour is getting shorter every time.

Once we had forward and steering I worked on transitioning up and down. I was trying to figure out transitions-how to make them smooth which is very much a work in progress. Mostly because Carmen does not appreciate my interfering with her vigilance. Asking her to do something when she is trying to watch for dangers (like psychotic squirrels). As a result I've become too strong in my asks and that's not going to be helpful for our dressage career. I worked on being as quiet as I could and as the ride went along we got better and better. We made some progress and finished with some nice walk-halt-walk transitions.

Saturday dawned sunny and warm.  For November, it was a gift that I wasn't going to second guess. Cynthia stayed over so we could ride early.  I only had to lunge Carmen for a short time before I mounted.  After that we went to work.  My goal is to allow the work to carry us in different parts of the ring without worrying that she will be scared of different things. I've been gradually expanding our work area.  With Irish in the ring I can push it even further about where we go.  I was playing with transition of  trot to canter.  She's been bucking and I think it's a combination of balance, tension and my aid being too strong.  When I ask Irish I just have to drop my inside hip. So I  played with that. The first time it didn't work right away but I applied a light leg aid and off we went. As we carried on it began to work. It was kind of funny because she would pick up and canter along and then suddenly it would occur to her that she was supposed to object. I just ignored that and asked to carry on. Soon  we were cantering nice and easy.  Once she cantered down the long side toward Irish instead of staying on the circle we were on:

Carmen: I want to follow Irish!
Me: okay sure
Carmen: yay! Oh. Wait. We're cantering in the danger zone.
Me: I know! It's awesome.

She broke to trot and then picked up the canter and then couldn't quite figure out whether to freak out, canter or stop. It was funny. In then end, because she didn't know what to do we did what I wanted - which was to canter into the corner and up the other side.

We worked on trot- canter transitions for a bit and then I brought her to walk and gave her a long rein. We marched around the ring even by spooky things and I let the rein be long and on the buckle.  I can't describe how nice it is to be working on real honest to goodness horse training stuff. We finished by riding down to the barn.

It's taken some time but we're getting there. And it's making me smile. 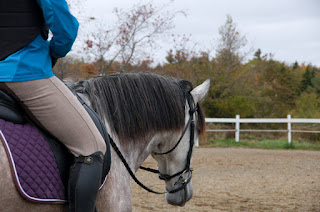