Sunday- all about the give

On Sunday morning we were all a bit tired- horses, humans and Karen's dogs. I wanted to ride a 9 but was late getting out there. This time the lunging was about energizing Carmen, not calming her (let's take a minute to appreciate that, shall we?).

When I brought her to the mounting block she casually backed up a few steps.
'you know, I think we should just call it a day now. '

I walked her back up and she gave a resigned sigh.  I mounted and Karen commented on the difference in her even since September. We started off working on the loose hips and the spinning ball. It still took focus but it seemed a little easier. Karen then introduced the concept of a giving contact. I thought I had that because I'm very careful to not pull back (most of the time). But she said that I had a backwards energy in my contact.  I tried to wrap my head around that and figure it out.

As we walked down the long side Carmen went into high alert and jerked to a stop. She was staring at a weed that was poking up by the arena doors and waving in the wind (it was an incredibly windy day). I let the rein go to the buckle and said 'run away if you want, but that won't hurt us'.  She stared hard at it and then sighed and lowered her head. 'no, I'm good'.  I was thrilled with that. I used to do that with Steele when he gawked at stuff. Give the whole rein so he knew he could  get away while I sat relaxed in the saddle. I took a moment to appreciate that I could finally do that with Carmen.

While we stood there Karen came over and took the reins to show me what the two contacts felt like. As Carmen relaxed Karen took the reins while I held them. After a few demonstrations it seemed to me that the 'backwards energy' contact felt harder even though the amount was the same. I then asked her to do the different ones and not tell me so I could see if I could tell. After a few minutes I then walked off with a better understanding. As I played with that I realize that every time I had a forward energy contact, Carmen would soften and reach for the bit. The tricky part was that she would then lose it and come behind the contact or try to jerk it out. At that point I would lose the feel and we'd start over.  However, we kept trying to figure it out together and there were no dramatics.

I then took this forward contact feel and put it with my spinning ball. Doing this I was able to get transitions from Carmen that were effortless and had her moving her balance back to her hind end. What a feeling that was- she was reaching into contact, balancing behind and it felt right.  We tried some canter and after a bit of flailing we got it together. She broke at one point to a very fast trot and I spun my ball backwards while telling myself to not pull backwards or tighten my hips. It worked and she came back to me.

We ended the lesson after that and I stood there one her letting her relax. She wasn't anxious to get me off but she did sniff my boots a bit. Then Cynthia had her lesson and Irish was again looking fantastic.

We packed up and got the trailer ready to go home. Irish hesitated about getting on and need a couple taps to self load. I then walked Carmen up, threw the lead line over her neck and said 'walk on'
'okay' she said and marched on so I could shut the bar behind her. I am not kidding myself that she's a self-loading horse but she's on her way. The trailer ride went well and when we got home she backed off  as easily as she got on. Irish was more settled too. The wind was bitter cold so we put on their heavier blankets and turned them out.

That night as I gave them their night feed I realized that we were all looking pretty tired and pleased with ourselves. They were happy to be home, as was I but the past weekend resulted in a real jump in Carmen's and our relationship and training. 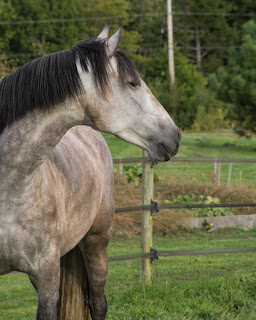