I was excited to have a lesson on Saturday morning. Karen is a Centred Riding Instructor and before my lesson she got me on a small trampoline. I was to imagine that my pelvis was a bowl holding a ball. I was to visualize that ball spinning different ways and see how it affected my balance. She also had me try bouncing with straight legs and bent joints to see the difference. I was then left to bounce and figure it out. To be honest, I felt silly but as I tried it I could see what she meant and it felt good.

I then got Carmen ready making sure that I followed our normal routine and did not rush her. We did our ground work and she as a bit wary (as yesterday) but the doors to the outside. I kept it all low key and worked on having her attend to me and the work.

I won't bore you with the details of the lesson but what we primarily worked on was getting my hips to follow the motion. After years of lessons telling me to 'sit still' I lock my hips. Karen had me focus on letting her motion move my pelvis. It took attention and as soon as I was distracted I locked up again.

Also, I noticed that my right stirrup felt shorter although I hadn't moved it. What I think happened was that yesterday when Karen loosened my hips I had more 'release' from my right. Which makes sense. My left is always tight (old riding injury) and my leg wants to go into a 'chair seat' rather than drape. When I do get it in the right position it hurts so I need to work on getting it to loosen. I may never get it perfect but then we all have our conformational flaws, especially as we age.

As we went along I thought that I was getting it but then Karen pointed out that I was too flexible in my waist.
'hold your middle still so the movement will go elsewhere.'
'where will it go?' I asked.
'try it and you tell me'
I made a face at her and then tried it. And guess what? The movement transferred to my pelvis. Where it belonged.

It was neat, as I allowed her to move me she became increasingly free in her back and pushing from behind. We got some lovely medium trot. I'm glad that I was experiencing it in the lesson because it felt 'big' and my instinct was to shut it down.

We were riding a 10 metre circle and I was losing Carmen out the shoulder on one side. I tried the outside rein and was moderately successful but Karen told me to close my outside thigh and that worked perfectly.

The spinning ball came into play into many parts of the ride:


I'm not normally big on analogies - they get me thinking too much and not doing. But as I played with this in the saddle it made sense. Also, as I visualized the ball spinning backwards during downward  transitions we had some of the best transitions ever. All I did was think 'walk' and she walked.

I was thrilled with Carmen and how much she seemed to enjoy the lesson and being with me. Irish was throwing a fit while we were out but after an initial worry she couldn't have cared less. We rode into the scary parts of the ring and while we had to discuss it a few times, we still got it done.

After that there a few more lessons. I enjoyed watching all of them. You should have seen Irish and Cynthia go. Irish was perky and forward and enjoyed himself immensely.

After we went into the house and I had a short nap. Then, before supper, I went out the barn. It was empty and quiet. Carmen greeted me happily and had a bit of a snuggle. I then tacked her up and we went back into the ring. I wasn't looking to work her hard. I just wanted to take some time and try to work out what I learned in the lesson. It seemed to be easier but I was sometimes not sure when I was moving my hips vs my waist. It was fun though for the two of us in the quiet of the indoor all by ourselves. We walked, trotted and cantered all over the place and it felt wonderful.  After I put her back and spent some time tidying up and feeding them. I then went back to the house and had a hot shower.

Jim again made a fabulous supper of Moroccan Cuisine. I could have eaten it until I burst. Later some women came over and we watched Mama Mia (and sang along of course). 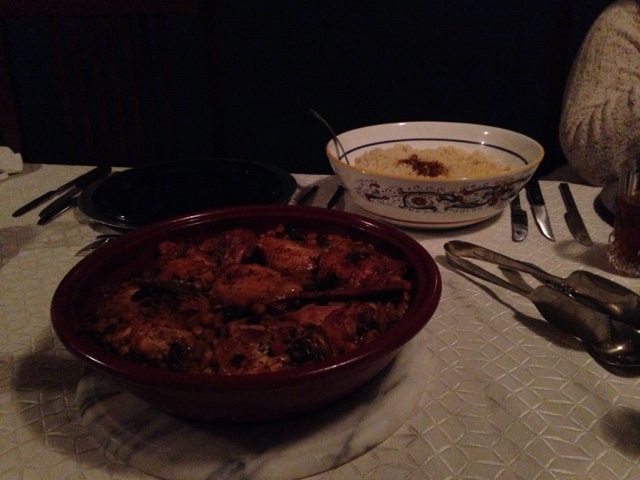 Once again I fell into bed exhausted and happy.