The Winds of Change

It is clear that Carmen does not like windy days. She's much more excitable and reactive to all that is going on around her. This is true in the field, in the barn and most particularly in the ring. However, Nova Scotia is a windy province and my riding ring is on the top of a hill. It is breezy more often than not.

In the past, is the days are really blustery, I often lunge and not ride. However, I try to not avoid working on windy days. This week was very blustery except for one day. That one day there was virtually no breeze at all. On that day the riding was easy and we could school all sorts of things. The next day and the one after were, however quite breezy.

On thursday the wind was whipping the trees and bushes quite a bit but I decided to ride anyway. I spent more time on careful ground work and then got on. I was quite pleased that she stood still even though the wind was blowing up her tail. As we worked she was very distracted and mistrustful of the blowing trees.
Don't ride defensively I told myself. Unfortunately,  myself was skeptical and decided to ride that way anyway. It's hard enough discussing things with Carmen without also arguing with me too. I find that the inner voice and Carmen can gang up on me. OMG We're surrounded, we must flee!

And I don't know why, but as I was going around trying for the 40th time to ride a circle  that was at least remotely round I had a new thought.
I LOVE the wind. Just love it. It's refreshing and clean.
And then I sat up straight and rode into the teeth of the wind.
let's go! I said.
What? Said Carmen Are you sure?
YES!
And off we went into the teeth of the wind. It rattled a bush at us and she scooted away.
Whoops. That's not what we were working on. I said. And returned back to the task.

We had a few discussions but in the end it was a successful ride because I stopped wishing that the wind would stop and decided to embrace it instead. (that probably makes no sense but I know what I mean).

The next morning was even windier. Cynthia came out to ride. Which meant while Carmen was happier to have Irish there, Irish was reacting to her tenseness. Once again, I decided to ride into the teeth of the wind. We had some hesitations, spooks and ran backwards once. Each time I sat up and rode forward. I gave her rein and said 'let's go'.

We finished with some canter work and then I walked her on the buckle around the ring.

I doubt that she'll ever like windy days but she will get used to it (she has no choice).

This weekend we're heading to Karen's to work in her arena and enjoy some horse talk with other crazy horse women. This is good for Carmen because the only way to get a horse used to going places is to go places.

I will let you know how it goes. 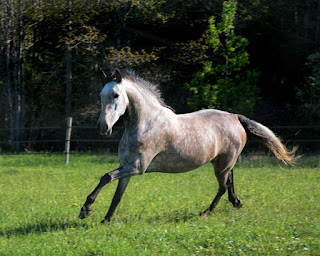 “Faeries, come take me out of this dull world,
For I would ride with you upon the wind,
Run on the top of the dishevelled tide,
And dance upon the mountains like a flame.”