With winter just around the corner it was time to figure out how to feed hay outside. My hay box did not survive last winter.  It became locked in ice and I couldn't remove it until May.  It also became a hazard as it was below where they were standing.  When we finally got it out it basically disintegrated.

I know that they have hay in their stalls but I like them to be able to eat outside.  So in my research I learned about slow feed hay nets.  I loved the idea of less waste.  Irish is very messy with hay and fussy if it gets dirty.  I bought a small one to try. I asked Ed to put a pst in the ground and I hung the  net to see if it was going to work.

It was comical to watch.  Carmen figured it out right away.  Irish was highly annoyed at have to take small bites of hay rather than the big mouthful he usually takes ( and leaving large wads of hay everywhere). At one point I say Carmen taking small ladylike nibbles while Irish tried to get some. In frustration he grabbed the top of it and started shaking it.

What new torture is this?! I swear she's trying to drive me crazy.

Here they are working it. You can see Irish's impatience and Carmen's patience.

After a few days he was eating from it but there's still grass so he can ignore it if he wants.  I liked the idea that I can bring it in if there's bad weather coming.  That will reduce waste as well. I went online and ordered a large one that slips right over a haybale. That makes it easy if you are as incompetent as I am with hay net stuffing.  The problem was that it was too big for one post so we put in a second one and suspended it.

So far it seems to be working.  I'm crossing my fingers that it was money well spent. 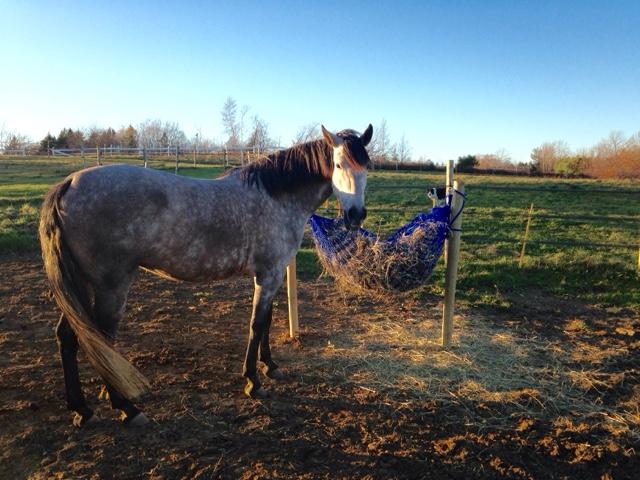