Since the 'Squirrel Incident' things have calmed down significantly.  I'm thinking that it's not actually related to just the squirrel itself but also to something else that happened that I didn't have a chance to blog about.

In the morning I stick to the same routine. I feed the horses and while they eat I muck out their stalls. I do Carmen's stall first. While she eats her grain I do one side of her stall. When she moves to her hay rack I'm usually done so I go in front of her and do the other side. I don't go behind because I'm not comfortable being that tight between a horse's hindquarters and the wall (it's a tight squeeze). If she spooks and leaps back I would be crushed. So I go in front of her. this has never been a problem. However, this one morning as I went by she nipped at me and grabbed the sleeve of my jacket.

I have a Zero Tolerance rule for biting. So I immediately moved her out of my space. I then left her stall and grabbed her halter. In the meantime she went back to her hay which is probably what she wanted - I had been going between her and the hay. However I had not choice. I put on her halter and headline and tied her to the tie ring in her stall (away from her hay) while I finished her stall.  I realized that this had probably been coming but I missed the signs (cut me some slack it's morning and I haven't had any coffee). It was a dominance thing that I needed to address. That evening, after work I did some ground work with her in the ring. This was to 'teach her a lesson' but to help her understand who was the leader. It only took 15 minutes and was not stressful to either of us.

Then we had the encounter with the pissed off squirrel. However, we were able to work through it. Since then I have ridden twice. I planned to ride on sunday but it started to rain heavily so I could only lunge. I rode on Monday and she was fabulous. There was no spooking and minimal stiffness. Overall, she was tuned in and listening. It was lovely.

Today I hurried home from work. when I got out of the car she was down by the fence line watching me intently. I called hello and headed into the house. I changed my clothes and headed out to the barn. Carmen was now by the barn and when she saw me she nickered. That was the first time ever.

I quickly tacked her up. I wanted to try her up in the ring. Now that it's dark by 5:30 I can see how my solar powered lights worked in the ring. I was also looking to introduce her to the idea of working in the dark with just lights. I wasn't sure how she'd respond. I needn't have worried. She was fabulous. A few looks at things which were understandable. But I love that I'm working on bend and contact and not direction and attention.

I finished after a brief time. I just wanted to introduce her to it and wanted to end on a good note. I also realized that I hadn't brought a flashlight so while there was lights in the ring and outside the barn I didn't fancy walking down to the barn in the pitch black.

Which made me realize how far my girl has come. She ties, cross ties and ground ties without fuss (by ground tie I'm not referring to same level as a true western trainer would mean but that's a different post). She stands still while I'm mounting. She leads like a champ anywhere I ask and I can stop and back up or turn and she goes with me. Her manners on the lunge have been terrific and when she does freak out it's like she realizes it and she stops and looks to me for guidance. She loves having her face stroked and looks forward to her post ride massage.  I also recognize that her heats are done and that has an impact as well.

It's been a while to build to this but it seems to me that Carmen has become a happy and settled horse. 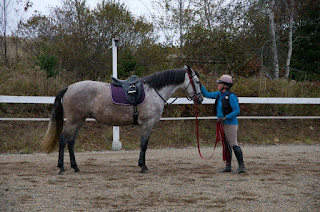 My goal of us showing next year doesn't seem quite so crazy.