I understand that there's this thing called the Olympics going on. I asked my servant and she explained that it's when different countries compete in sports. Then she said that there were no horse sports in the Winter Olympics and that seemed really odd to me. But Irish says that humans are weird that way and we should be happy that they don't have this as an Olympic sport: 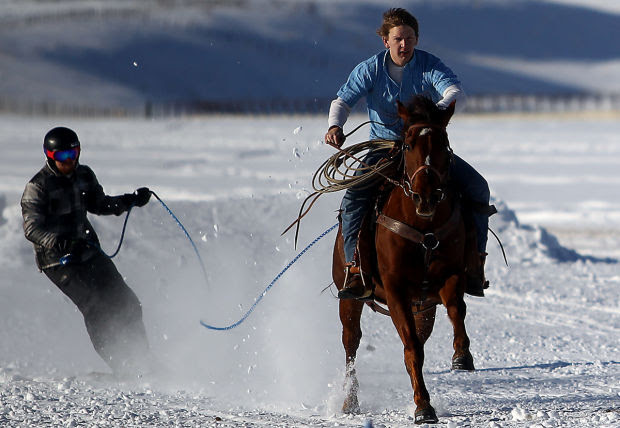 I don't know, it looks like fun to me.

Anyway, here at the farm there is this fun sport going on that I thought I would share with you. I call it "The Irish Pursuit". It's certainly been entertaining to watch. It goes like this:
There are two players:
1. The Chaser- that's Mom's position
2. The Eluder- That's Irish.

The goal is to see who wins- does Mom get Irish into a halter or does Irish manage to elude her. It seems like a fun sport. It's a battle of wits and agility. Players need to have steely dertimination (is there any other kind?), quick wits and an ability to read body language.

The tournament started on Monday. It looked at the beginning that Mom was out of her league but she was able to use her wits to pull a win late in the game. It's fun to watch the two of them acting like they aren't paying attention to each other when they are keenly aware. Irish is watching for her to make her move with the halter and she's watching to see when he's going to make a break for the large field. The last two days she closes us in the little paddock.

Irish calls this cheating. But Mom calls it 'controlling the field of play'. I checked the rules and it seems that it is allowed. Irish tries to use me as a shield but I tell him that I'm more like the ref and need to stay out of the game. Besides it's easier to watch from the sidelines.

Here's the play by play from yesterday's match:
Well is a lovely afternoon on Oakfield Farms. The two players look to be in good form.

As the game starts the players casually walk around the paddock pretending that they don't see each other.

Irish makes an early move and heads to the big paddock. Looks like the game is going to get moving. But wait, wait, no. Teresa ignores this feint and carries on with her chores. It's a false start ladies and Gentlemen.

Teresa heads into the barn. Is she forfeiting the game? I've never seen her give up before. I think she has another plan. ....and there she is- re-emerging on the field of play with a hay bale. I think she's using the 'bale bait'. Yes, yes there she goes- she's putting it in the hay box. Irish comes sauntering in, will he fall for this?

Oh- there she goes- Teresa is heading for the gate. She's at the gate. Will she get it closed in time? Irish's head comes up- he knows something is up. He's comign to the gate. Who will get there first? It's a close call ladies and gentlemen but YES, Teresa gets the gate closed. Irish can no longer use the galloping gambit.

Teresa approaches with the halter. She's not moving directly to Irish but at an angle. She's avoiding the confrontational stance. But Irish is too cagy to fall for this. He moves off looking for an escape hatch. Teresa moves to cut him off but he's too quick and moves away. She backs up and heads to the other side. Irish tries to go by but she moves and stands facing him. He has room- will he try to go by? No, no- he backs up. Oh oh, now he's in the corner. Irish tries to spin right and left but Teresa dances back and forth cutting off his escape.

Irish stands still. I think it's a false forfeit but will she fall for it? No! She's staying put. Well I'm not surprised. This is not her first rodeo. She waits for the signal. And there it is! Irish breathes out and lowers his head. Teresa approaches slowly. She scratches him on the wither.

AND SHE HAS THE HALTER ON! First match to Teresa!!!

Oh, wait. What's she doing now? She's taking off the halter and heading into the barn. In this brief pause before the next match let's talk about treats. Is your horse getting enough? Do you know that 9/10 horse believe that their owners are not free enough with the treats?
And we're back for the second match!
Teresa emerges onto the field of play. Looks like she's going for the bolder approach this time. She's heading right to Irish! She's being careful to not approach Irish head on but look at the body language- it's screaming "I'm here to halter you".

What will Irish do? There he goes- I think he's thinking of testing the fence. No. At the alst minute he changed his mind. I don't blame him, it hurts! And he's cornered. You know I'm not sure that his heart is in the game. And it's over. Yes she has the halter on him!

And we're back! Now this match will be interesting. Has the last two matches had an impact?

Why yes. He's not even looking to move away. Teresa walks up and that's it it's over.

I never would have believed it but it's clear that Irish is out of his league with this one.

See? It's fascinating to watch.

On another note Mom is ecstatic because Canada has won gold in Women's curling and Hockey.
Not sure I get it, but it's nice to see her happy! 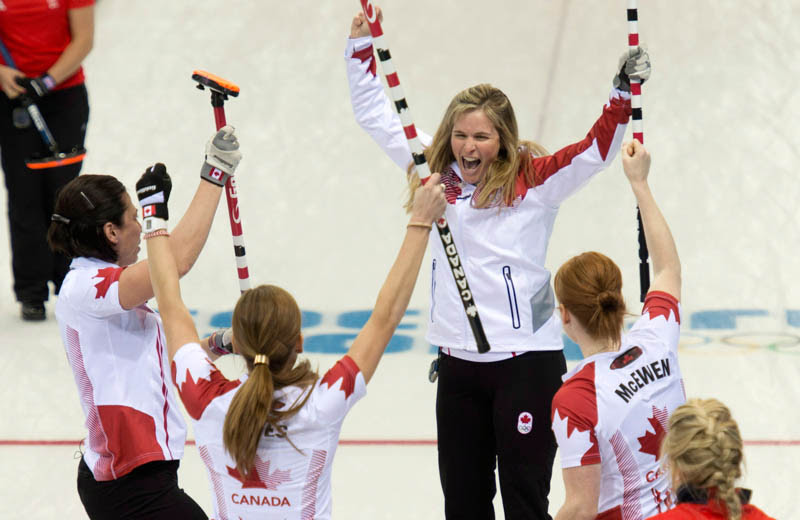 How can they look so happy when there's no horses to be seen?

This is Steele signing off!
Posted by TeresaA at 8:45 PM