In Which Ed Gets a Bigger Stall

Our barn is 36 x 36. Along one side are 3 stalls. The original plan was for it to be 3 12 x 12 stalls. But in consulting with others and careful consideration I decided to do 3 10x 12 stalls. I had no plans to have a horse over 16'2 and could not see the reason for having huge stalls. The extra 6 feet I planned to have as an area for my wheel barrow, brooms, pitchforks etc.

However, it became apparent that Ed would need a spot for his tools and stuff. So until the garage was built those 6 feet became known as "Ed's straight stall". It's worked out okay. I found spots for my other items and it's been handy when I needed a screwdriver, or drill, or tape measure. I'm pretty sure Ed was worried about my free access to his tools. He's very particular about how his stuff is organized. I have, however, been trying hard to remember where things go.

When we agreed that his tools could go there we needed to iron out some details. First was that it was a barn first and a tool shed second. So far the co-habitation of horses and Ed's tools has gone well.

We are quickly learning that with a farm things are never truly done. The latest decision is that the dutch doors that I loved so much are just not going to work in a Winter climate. No matter how we try the snow and frost builds up and this makes them difficult to open. A few months ago with the big snow followed by ice they were almost impossible. Ed was not appreciating how diffucult they were until I was away for a few days. Nothing like trying to chip open doors in the freezing cold while a horse waits impatiently to make you rethink the esthetics. 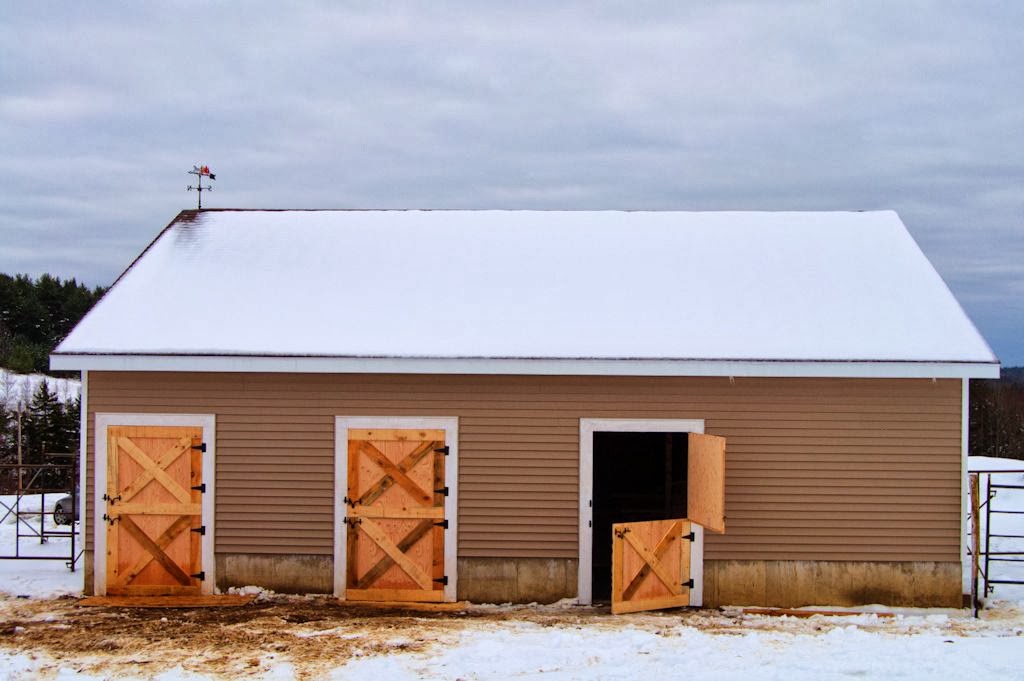 So we decided that we would replace them with sliding doors. This means that this summer I will need to put up a barricade if I want air flow when the horses are in. But that will be easy enough.

We also just had some ductwork installed in the house to run the hot air upstairs. The house had forced hot air on the main floor and electric upstairs. When our house was built (a little less than 100 years ago) the heat source would have been the woodstove in the kitchen. I love having the hot air upstairs but now there are holes in my ceiling and walls that need repairs. Today Ed went and picked up wood for the doors and some drywall. When I came into the barn I saw it stacked in the aisleway and sighed. He really has no where else to work but I could foresee some difficulties. I then was struck with a brainwave. When Ed came back I said to him 'wouldn't it make sense if we took the hay out of the 3rd stall and you put the wood in there and did your work?"
His face lit up and he went right to work. We moved the hay out and I helped him bring in the wood and drywall.
"now you know that this is temporary, right? I need this stall for guests."
"Of course!" he assured me.

But I am a little worried. Time to start encouraging the garage...