I know I'm getting dating myself but do you remember the classic movie "The Karate Kid"?

It's a great movie. What I remember most from the movie is that when Danny first started working with Mr. Miyagi he didn't actually learn any karate. Instead he had to wash cars and paint fences.

Yes, I'm getting to how this relates to the Star of this Blog. The idea was that these apparrently unimportant chores laid the foundation for karate skills later.

The same is true of horse training. You can't prepare for everything that might happen when you ride. But you can lay in behaviour patterns that will assist you with the unexpected.

For the past 20 months that I've owned Steele I've been working on lots of things. One of them is get him to yield any part of his body when I tap it. If I tap him on his side he will move over away from the tap. I've bene doing this when we're at liberty and (of course) on the cross ties to get him to move over. while initially he didn't see the point of this he learned it quickly.

Fast forward to yesterday. It was a beautiful sunny winter day. The horses were out and I was catching up on some barn chores. I obviously do barn chores during the week but on the weekend I like to take my time and give it a really good clean. When I finished I grabbed Steele's halter and lead and went out the paddock. Irish was at the top of the hill having his afternoon nap. It's his favourite spot to snooze- where he can survey his kingdom. Steele was in the small paddock eating hay. When I came out he walked up to me and I put on his halter and led him into the barn and out the barn door to go for a walk. I like to take him for walks but haven't been recently due to ice. However, I had checked the driveway and it was snowy but not icy.

Steele walked beside me, looking around but not too fussed about it. I waited to hear Irish's whinny but it never happened. I peeked behind me- he was still sleeping and hadn't noticed we were gone. I carried on with the walking. When we got to the bottom of the driveway I turned along the path that leads to the manure pile and to the woods. Steele is less certain about this path - there's rustling trees, Belle was running around following rabbit tracks and there's various items stored there (like pallets, an old shed etc). But I just kept my pace steady and he walked along without trying to pull away and did not spook. Even when Belle came bursting out of the brush and bounded across to the other side. I knew she would do this and I wanted her to. When we go out hacking I won't be able to control everything (especially the grouse who like to jump out) so Steele needs to learn that it's okay for things to come bursting out. Steele snorted and stopped. I kept walking and he came along but arched his neck and made it clear that he didn't appreciate the tomfoolery. I think I heard Belle snicker... 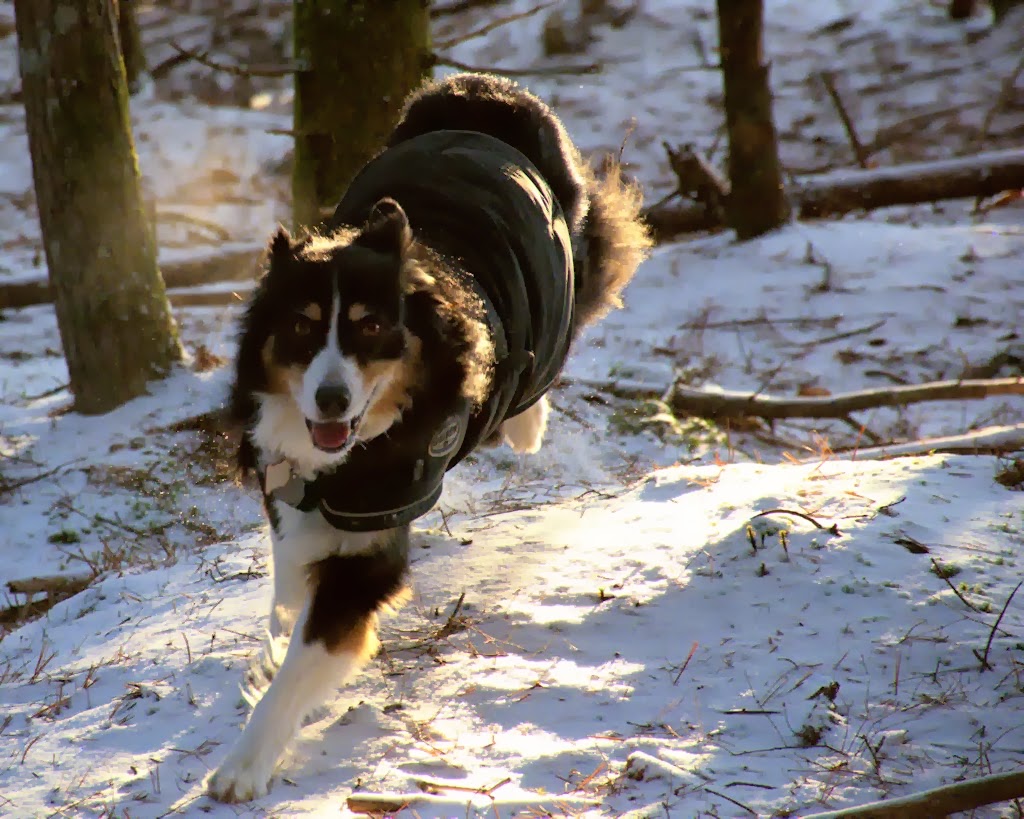 Wax on- wax off- all that work I did on leading in the ring, stall, paddock etc have taught him that he's not to run away from me or carry on - no matter what the provocation.

We walked down the path as far as the manure pile. I turned around Steele came in front of me, anxious to head back to safety. I stopped and brought him back to my side. As we walked back I stopped a few times. the first time Steele kept going but when he hit the end of the lead, instead of pulling he turned so he was facing me. I walked up and moved so he was beside me. Whoops. I realized my error. I shouldn't be the one sorting out my position- he needs to sort out his position. So the next time he barged ahead and spun around. Of course he did- I had just taught him that it was okay. But there's no point in getting upset with him or me. I just needed to sort it out. So rather then move myself, I took the end of the lead and swung it towards his right side. He moved away. I swung it again and he moved so he was beside me.

Wax on-wax off- teaching him to move sideways to my cue made it easy to sort out this error. I then walked ahead. I stopped again and he ignored my signal again and ended up facing me. No big deal. I repeated the cue with the lead rope and once he was beside me we walked on. The next time I stopped he halted beside me.
good boy.  I scratched his withers. I could see him thinking this through. After that every time I stopped he stayed beside me.

When we were almost to the barn I saw Irish still asleep. Awww. He didn't even realize that we had left. At that point, he raised his head and looked around.
"zzzzz, huh, whazzat? oh it's just Steele and our servant walking in the driveway"
His head then shot up\
"hey, what? They left me ALL ALONE????"

As we walked into the barn he came galloping down the hill and into the barn. Steele looked at him calmly.
"oh Hi! we just went for a walk in the woods. It was interesting. Did you have a good nap?"

Looking peeved, Irish stormed out of his stall and stood with his back to us.

He forgave us by supper time.

Oh well, I'm sure that Mr. Miyagi had his critics too.