Like all of you Covid-19 is affecting our daily life. I have started working from home this week. 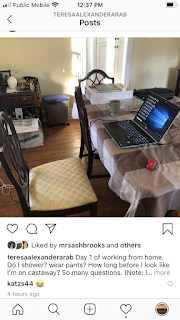 Working from home has it's attractions. The commute for one. But I'm working harder than I have in a long time. I am connecting with my people and colleagues. I have vacation that I need to use before the end of March but I strongly suspect I will lose it. My plan had been to take some afternoons off to ride. I had planned to have a lesson on Tuesday afternoon. But with the move towards our staff working from home there was no way I could take off. So I had to cancel it.

There is a general worry and stress from this pandemic. The news does not help but it is also necessary. So I try to ration it.

The dogs are happy I'm home and it does allow for me to take walks with them at lunch time.


Yesterday Guinness was not himself in the morning. As the day went on he became worse and mid-afternoon, when he didn't want to go for a walk I called the vet. They said to bring him right away so we did. This meant I had to cancel a lesson I had booked for 4:30.

The vet took some x-rays. He had a lot of gas in his stomach and intestine but not enough for it to be bloat. No temperature, heart normal. It was possible that he was having some early bloat or he ate something that disagreed with him. The vet gave him some barium mixed with food, some drugs to calm his stomach and we took him home. If he wasn't better in the morning we would bring him back, do another x-ray to see if the barium showed any blockage. About an hour after getting home he threw up a bunch of barium so I don't know how much was left in his system. He slept with us all night so we could watch him. This morning he was much better and now he's completely normal.

We had a slow feed bowl for Guinness but he broke it. And then bit and broke the next one. So recently we had switched him to a regular bowl. Ed has ordered a metal slow feed bowl from Amazon and in the meantime he's being fed in small amounts. I was so relieved this morning- I was really worried.

Today is technically my day off but there was work to do so I did a few hours. But I also really needed to do something to de-stress. This morning I baked some cookies. I find baking to be relaxing.

Later in the afternoon Julia came over and we tacked up the horses (don't worry, we maintained our social distancing and made use of the hand sanitizer). I really really needed to sit in a saddle and do something physical.

The ride was awesome. Carmen was pretty relaxed despite my cat hunting in the next field. We were albeit work on our shoulder-in/haunches-in and counter canter. For being so early back to work she felt pretty good. Of course I have no media so you just have to believe me. At the end I was walking her out on a long rein. When we walked down by the brush she gave a sudden start. I just sat there and spoke to her and she gave a breath and then carried on.

After I hosed off her legs while she stood ground tied. Which made me realize how far we've come. it's the first time I've hosed her this year.

The world seems to be going to hell these days and it seems that no relief is in sight. But everything is temporary. As long as I have my family (4 and 2-legged) and get to spend some time in the saddle I will be okay.

I found this advice from Skint Dressage Daddy. It looks like great advice to me. 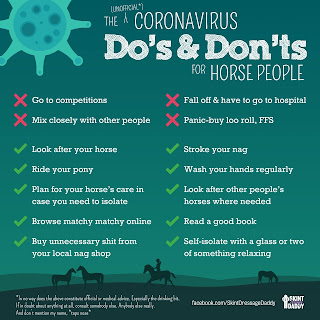 How are you coping with all this?