The Princess and the Pea

I love to ride. I truly do. There's a feeling of 'home' sitting on a horse that is rare and magical to me.

So of course I had plans to ride on Sunday. I waited for Ed to get home from Church so that I wasn't riding alone. I decided to leave Irish out in his paddock. I knew that that might cause some issues with Carmen but I'm not moving horses in and out because one might be upset. She would simply have to adjust. That said I shut the barn doors and made sure that I had everything ready so that I could be efficient. I decided to try Irish's memory foam pad under the saddle to see if she liked that (saddle fitter is coming soon).

She came right up to me in the paddock and followed me in. When I put her in the cross ties she began to get upset but I simply reminded her to stand and went about my tasks. I was very pleased that she settled in a few minutes. Not that she was pleased- far from it- but she was well behaved. That was enough for me. Irish stayed out of the barn.

We entered the ring and she showed me that she knew the drill. I was leading her around and she was being lovely when all of sudden all hell broke loose with Irish in the paddock. He began to run up and down, squeal, buck and generally through a hissy fit. I couldn't figure it out. But, what I was thrilled about was that Carmen completely ignored such shenanigans. She stayed focussed on me and really tried to figure out what I wanted.

I brought her over and got ready to mount. She backed up when I stood on the step stool. I got off and had her back up even farther. I then brought her back up. I was prepared to do this for an hour if required- I wasn't getting on until she stood. I must have conveyed that idea because she stood perfectly still. I guess she was just checking.

Our walk work was quite nice so I asked for a trot. She gave a small crow hop and was not happy to go forward.
hmm.
After a few more small bucks and ear pinning I stopped her and dismounted. I took out the pad and got back on. At my first request to trot she hesitated and then surged forward. Obviously the pad was pinching. Our trot work, while not stellar was pretty good. Our only issue was that she started to get a bit over-tempo. I focussed on slowing my posting to bring her back. She broke into a canter and I let her go forward for a circle or two before I asked her to come back. She really didn't want to but I wasn't ready to let her go- Ed was also no where in sight. 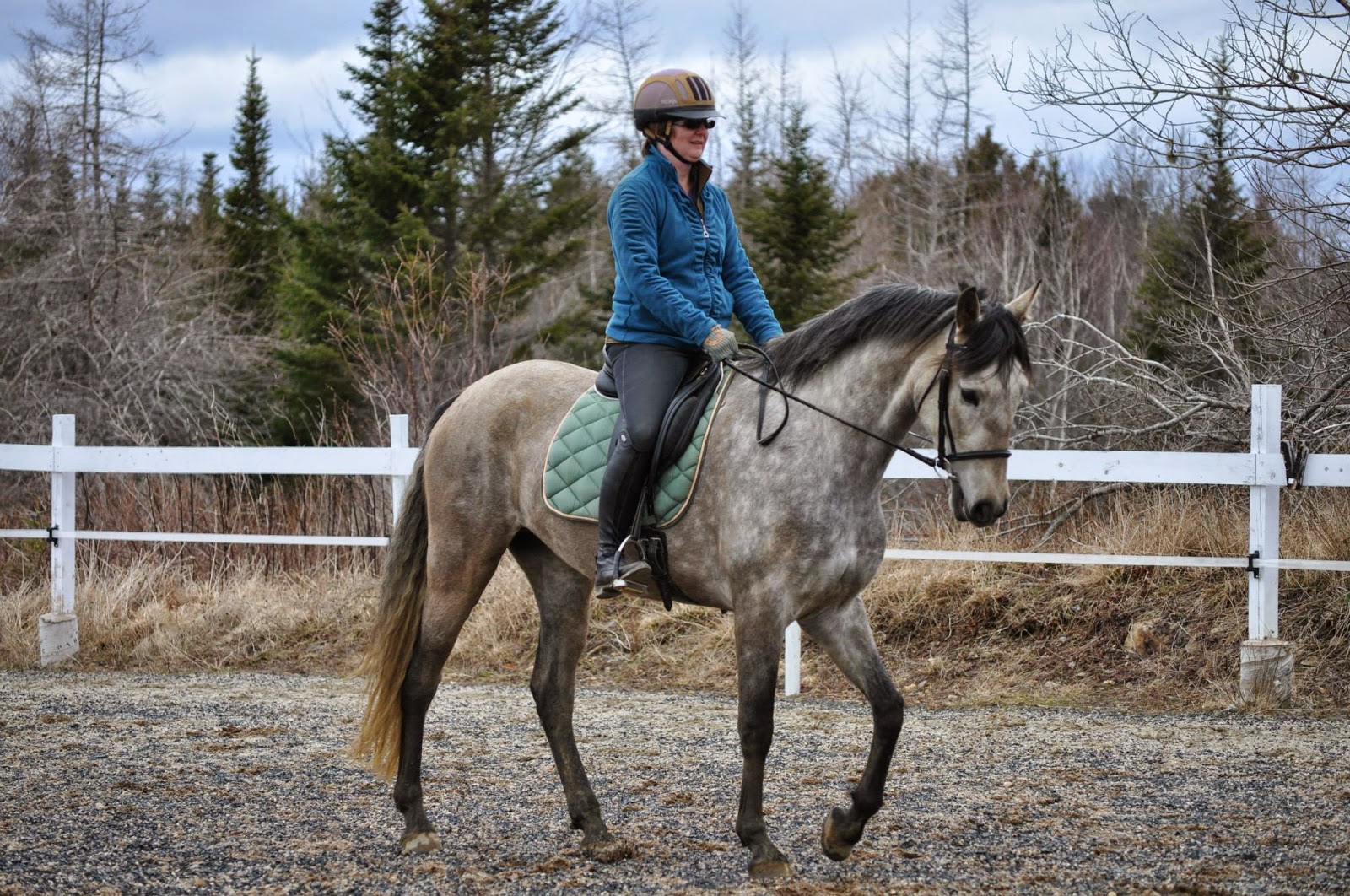 Should I mention that through all this Irish continued to pitch his fit? And this was our first time solo in the ring? I found a good moment and dismounted. She walked down with me like a good girl. I untacked her in her stall and she went out to see Irish. She then came right back in to eat hay keep me company.

As I was doing my chores, a girl mounted on a horse went cantering down the road. Irish freaked out again. Ahh. Ed confirmed that she had ridden by when I went up to the ring. That was why Irish went crazy. For whatever reason, horses going by make him lose his mind. Carmen looked at the horse and then carried on calmly eating. Phew.