With the snow melt starts the spring cleanup. This time of year when the snow is going and the grass hasn't started everything looks very messy. Some of it is perception and some reality. The accumulation of hay and poop in the snow leaves quite the mess.

I started some of the clean up of the little paddock. I got a bit done and then the tractor got a flat tire. Of course everything closes at noon on Saturday and it's now 11:30. So we use the ATV to finish dumping the cart and leave it for now. I did put some into piles to make the pick up easier. Ed and I also cleaned the house from top to bottom. We joked that it was too bad no one was coming so that they could see it before the dogs tracked mud in.

Ed has also been busy in the garage making some things for me:

The weather was getting warmer and I checked out the ring. It's pretty much thawed so I go into the field and put a halter on Carmen. She followed me out of the gate and we went up to the riding ring. She was 'up' but well behaved. My plan was to lunge her lightly. I wanted to see what she knew and introduce her to what I knew and see if we could communicate. She started off quite excited and a crowded me a few times. I introduced her to the idea of my 'bubble'- I have a space around that she's not allowed to intrude into. Once she was quite pushy and hit me with her shoulder. I smacked her with the end of my lunge whip and sent her out. She tried to run away but I kept her with me. After that she was more respectful of my space.

After 15 minutes I called it a good start and we headed back to the barn. when we went out the gate she trotted out ahead of me. This led to us going in and out and in and out and in and out until she was walking like a civilized horse. In the barn I wanted to give her a good grooming.  That, in retrospect, turned out to be a mistake. Irish followed us into the barn which was good but then he left. That's when her separation anxiety kicked in. She became quite agitated and banged around pretty much ignoring me. I did some more ground work to keep her focussed on me but as soon as I put her back in the cross ties she became agitated again. In the end I decided to let her figure it out by herself. So I stopped trying to groom her and stepped back. I kept the lunge whip with me to keep her from charging forward (and the barn doors were closed). She pranced, whipped her head around and pawed. Essentially she threw a tantrum. I realized that I should have left the lunging on a good note and put her right back into the pasture - I prefer to work on one new thing at a time. But it was too late and we needed to work through it. Once she was standing calmly (if not happily) I quietly undid the cross ties and led her back out.

Then two friends came to visit so we got to show that the house can be clean.

After I brought the horses in and then I brought Carmen back out to the cross ties. I was hoping that I hadn't undid my accomplishments. I needn't have worried- she stood completely still and I was able to groom her like I wanted. She seemed unfazed by her experience.

Today was lovely as well. I went for a 5 km run first thing. It was great to be able to run outside again and not on a track. Later I  had a visit from a friend who wanted to meet Carmen. Both her and Irish were well behaved and charming. We had a nice chat and after she left I went in and changed into riding clothes. I went out to the field with lead line and halter. Carmen headed down towards the barn but Irish came charging down and chased her back into the field.
Irish: "no you fool- it's a TRAP!"

I waited and followed them out.
Irish: "don't say I didn't warn you"

I put the halter on Irish and led him down to the barn.

Irish: "wait? what? I thought you wanted Carmen. Hey, you have the wrong horse"

I tacked him up and led him out of the barn while Carmen munched in her stall. When we left she became upset and ran out to the little paddock. I mounted and we headed up to the ring. I wanted to have a short ride working on stretching and suppling. I know that Irish lost a lot of muscle tone over the winter and he needs to be brought back slowly. While we were riding, Carmen ran out of the barn and gave a long whinny. She then ran into Irish's stall, gave a loud whinny. Ran back out and into her stall and then back out. She then stood there and watched us.

The nice thing about a 15 year old horse is that you can throw a saddle on after 4 months off and he'll behave. Mostly. But he's Irish so I didn't give him that long a rein (after all he dumped me last year). However, he was very well behaved. We walked mostly with a little trotting. After 15-20 mins I rode him back to the barn. Carmen was happy to have us back.

Now it was her turn. While Irish was in the barn cooling off I took Carmen up to ring. Every time she tried to get ahead of me I would make her back up. If you were watching us it probably looked we were doing a cha-cha. In the ring I lead her around a bit and she was very good. We then started to lunge. Over all she was very good. Our only issue was she didn't seem to understand my walk command (probably my accent). Every time I said 'walk' she would stop instead. When I asked her to walk on she would trot instead. However, with repetition I finally got her to walk and then gave her lots of praise. She never pulled against me and seemed to be trying to figure out what I wanted.  I really liked her focus and how she didn't seem to care that Irish was calling from the barn. Back to the barn and I let them out to have a few more hours of sunshine.

I was really happy with how well she's settling in.

I had such a lovely weekend playing with my horses and just being outside. 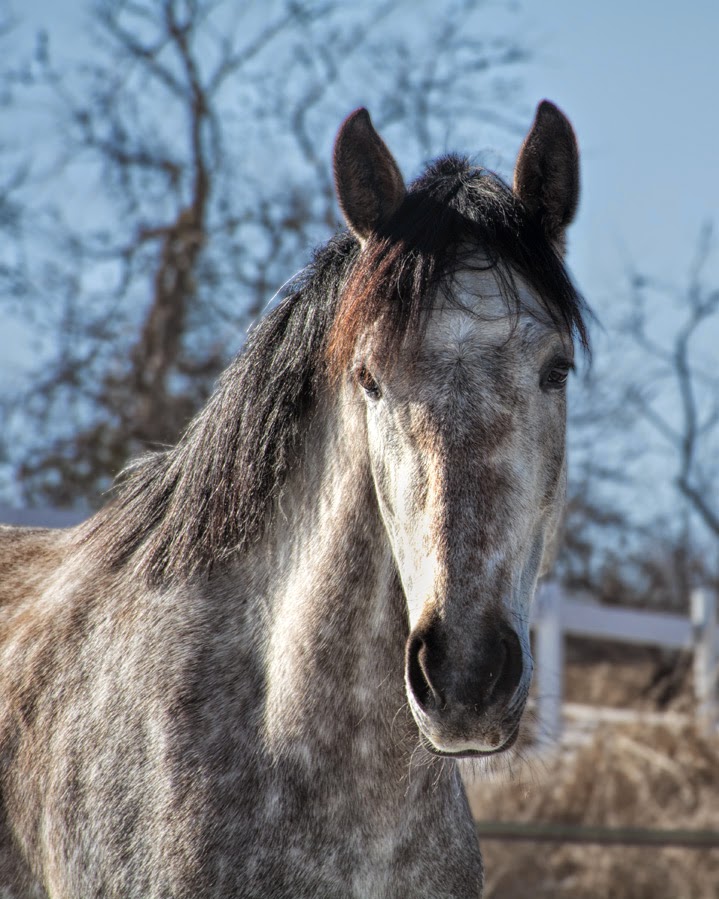