Yesterday my friend (and fabulous farm sitter) Joanne came out to see me ride Carmen. She also brought her camera so all photo credit goes to her.

Cynthia also came to ride Irish, who made sure that he had a good coating of mud so that he was wasn't cheated on the grooming. Don't tell me that that horse does not have a sense of humour.

As soon as Carmen and I started lunging it was obvious that she was not as mellow as the day before. There was far more zip in her step and she was just a beat or two behind listening to me.
'just a sec, I'm busy right now'.

While I am fine with horses expending energy on the lunge, I believe that it should be controlled energy. I don't like feeling like I'm flying an 1100 pound kite in a thunderstorm. So as we lunged up and down the ring I kept reminding her what I wanted.

Whoa is not 'I would really appreciate it if you would whoa. That is  you don't mind stopping, take your time."

I'm more like 'whoa' and then 'WHOA'.  After a few WHOAs, Carmen tuned in to the 'whoa'. And got lots of praise for it. When she was clearly listening to me I decided that it was time to get on.


She walked up to the mounting stool (Ed hasn't finished my big mounting block yet) and stood completely still while I mounted.  When we walked off it was clear that she was still a bit tight. So I did lots of changes of directions and circles (big and small) to keep her mind on me and not all the other things that could get her into trouble. After walking for a bit I asked her to trot. I felt a hesitation at first but that could be the saddle. I posted gently trying to see if she seemed to feel pinched. However, after a few strides out she settled in to the trot work.

Carmen definitely has a lovely forward stride in trot and walk. I kept my reins a bit short because I still don't know what she does if she spooks and I didn't want us to get in trouble.
I was really focussing on sitting up and keeping my core engaged rather than curl forward which is what I do when I'm feeling vulnerable. I'm doing way better with that but it take mental effort.

Irish and Cynthia were going around doing their work and Carmen decided that that's where we needed to be. I, however, had other ideas so I kept us away. This lead to a  few disagreements. 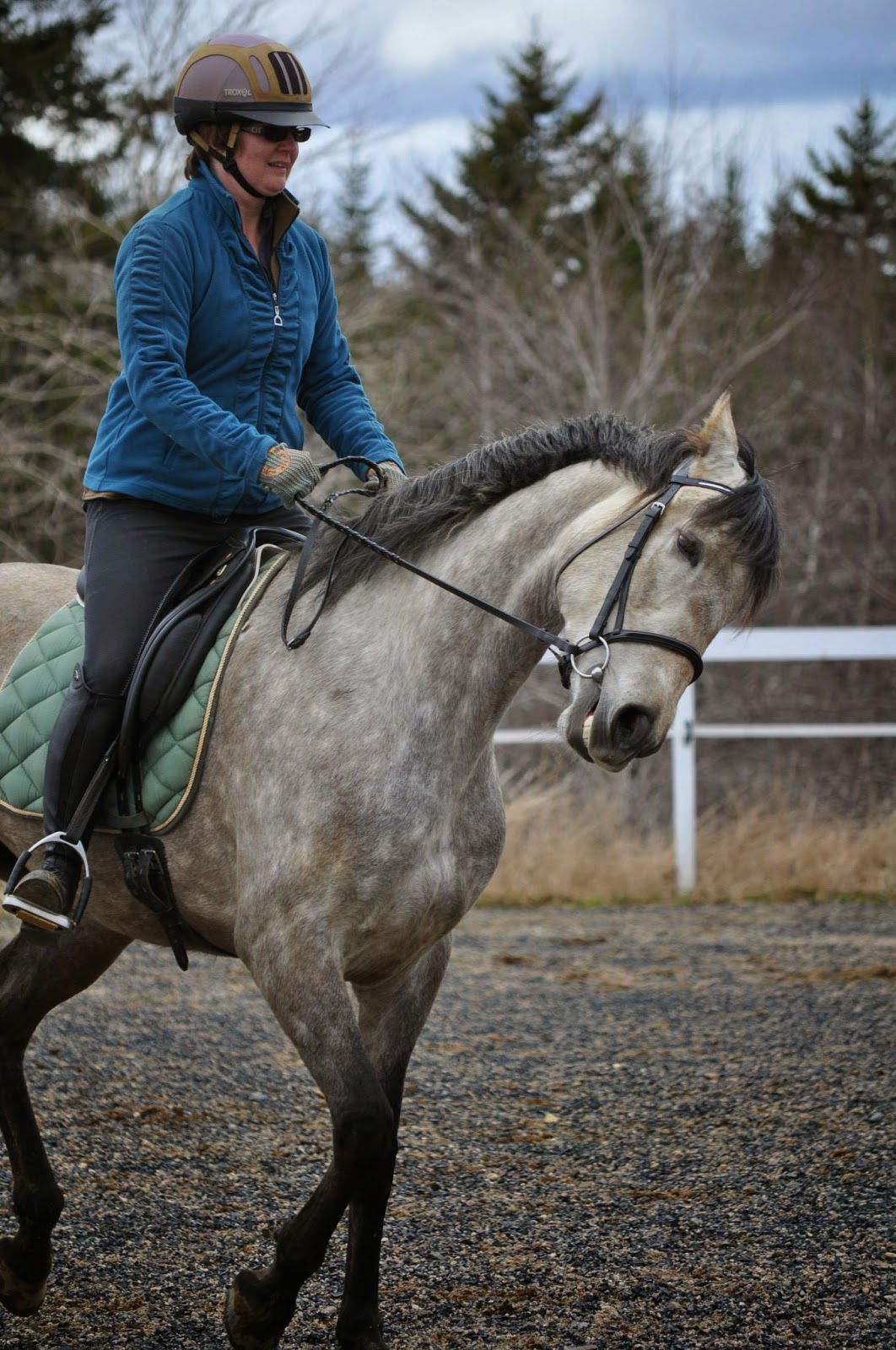 I made sure that I released each time that she went the way I wanted and she started to get the idea. She did do one big spook at something in the grass and started to run away. I pulled her into a one rein stop but it took a few circles for her to realize that she wasn't going anywhere. As I pulled her head towards my knee she was all "hey stop that!" and I was all "you first". As soon as she stopped I released the rein and while she thought that over I stroked her neck. After that things went much better. She might be a bit of a princess but she's a smart princess.

According to Cynthia and Joanne I smile a lot when I'm riding this horse. I am not aware of it. 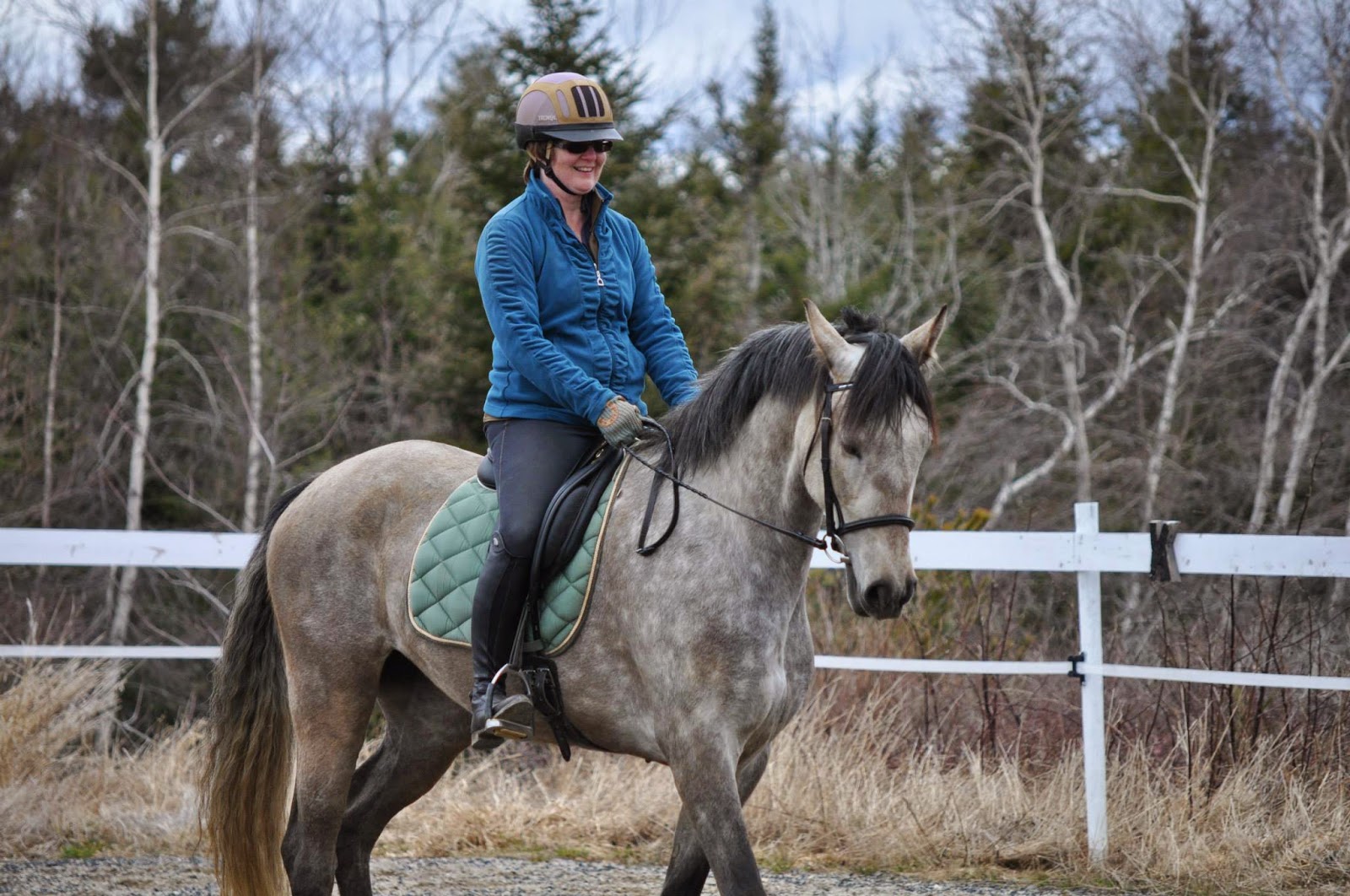 But can you blame me?
Posted by TeresaA at 8:38 AM