I realize that I'm falling into the post-a-day club and it will probably slow up but for now I have so much to share (including photos).

Barn Name: Charlante is a beautiful name. I really quite like it- it's elegant and sophisticated. But Ed wanted a barn name that was easier for him to say. If you have read my blog from the beginning you know that we did this with Steele as well. Since we are a partnership it seems a small thing to choose a simpler name for her 'barn name' or every day name. That's not easy as it needs to capture her personality, be simple to pronounce and not be too cutesy. I had considered 'Charlie' but she's really not a Charlie. I tried out 'Sugar' for while (given the molasses required) but that's more of a pony name. I visited baby name sites, dictionary sites and horse name sites (those are interesting).

After much thinking and discussion with Ed, we settled on 'Carmen'. I like it- it's a strong name, not cutesy and it means 'song'. It seems to be sticking so that looks like we have a winner. 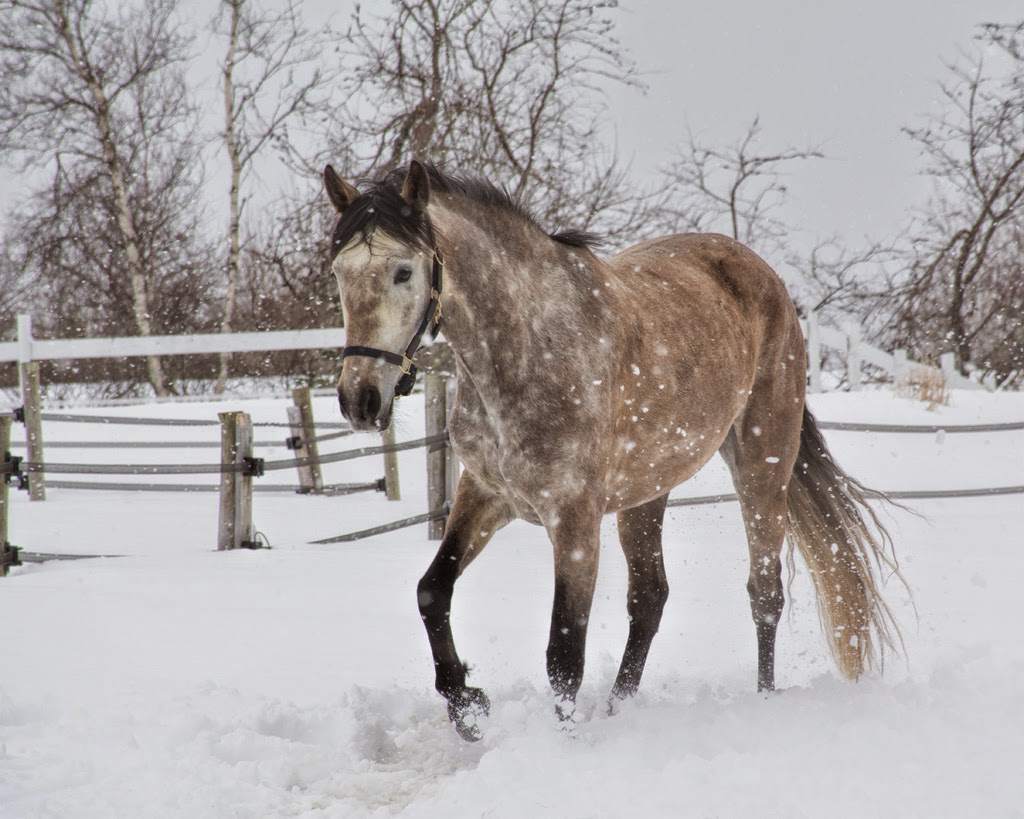 Eating: She's eating like a normal horse and enjoying her feed and hay. I plan to weigh her weekly to make sure she continues to gain.

Companions:  Irish and Carmen are hitting it off very well. She really tolerates a lot from him- I'd have given him a kick but she's very gentle with him. He's taking his job of showing her around quite seriously.

Learning the Ropes: I've been exploring what she understands and showing her how I want things. I find her to be quite smart. I think that not being able to ride right now is a good thing. It gives us time to become acquainted without too much pressure to perform. I like to do a little bit with her every day and see what she thinks of things. In the cross ties she is very calm but if you're not grooming her she becomes impatient and paws. I've been correcting her by a verbal 'no' and small tug on the lead line. I have a lead line on her in the cross ties just in case she gets loose and it gives me a way to correct her even if I'm at her rump. I simply have it in my hand. Last night after two corrections I saw her pick up her foot, pause and then gently put it down. good girl.

I don't like for horses to get ahead of me when I lead nor do I like to keep pressure on the line. She's good 90% of time on this unless she's worried about where Irish is (like in the morning heading outside). But the correction is really minimal. Our trek outside is kind like a wedding march- step-pause-step-pause. She manages to suppress her impatience very well.

Yesterday when it was time to come in I brought her in first. She came well enough (her manners at the gate are impeccable) and hesitated slightly going into the barn. When we came to her stall she slammed on the brakes.
No.
What do you mean no?
I'm not going in there. I want to be with Irish.
It's time for you to come in here.
NO
Rather than get into a fight with her I wanted to see what she would do if I didn't argue with her. So I just stood there inside the stall with her outside like I had all the time in the world. I could have battled her and won but I didn't want her to associate coming in with a fight (although if she had escalated I would have had to). She looked at me. I shrugged and breathed out. She lowered her head a bit.
come on Carmen. Trust me. It will be fine.
I gave a gentle tug on the lead and she came right in.

I went and got Irish and she's figuring out that it's okay. There is, however, lessons on separation in her future but one step at a time.

Today out in the turn out I was doing some work in the small paddock. She hung out with me and I scratched her wither. A few minutes later she came back and gently blew in my face (it's how horses say 'hello'). I blew back and then we carried on.

I am falling in love. Or may already be there.