I am so over winter.

Yesterday was a rainy day, on top of all the snow. Some barns have collapsed and locally two people just finished riding when the riding arena collapsed. In the morning I went to the indoor track to go for a run. It's been a long time since I did it but I managed to run 5 km straight.

While it was nice to have mild weather it became apparent that the water was getting dammed by the piles of snow. As a result, Lexi's stall flooded. I had to empty out my spare stall so that I could move her over to that one. Armed with shovels and my ice scraper I began to dig more trenches to give the water a place to go. 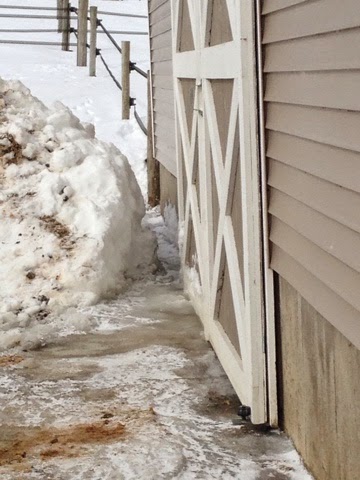 Nothing like cutting through water logged snow and ice in the rain to make one feel, well, homicidal. 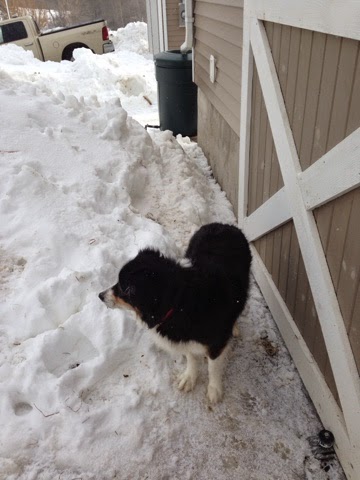 After futilely trying to stop the flood into Lexi's stall we took a break. Ed headed into the house and I brought the horses in. Lexi was fine with her 'new' stall but Irish got all upset. Heaven knows he doesn't like change but I thought he was over dramatic. Plus he was completely unappreciative of all the work I did.

I fed them and headed outside. I surveyed the situation and the solution came to me. You see, a few weeks ago in trying to get Lexi's stall door open to the outside we chipped away the ice. This created a basin for the water to pool and it was seeping to the inside. The other doors were blocked by snow. So I started shovelling and packing snow up against the door. I stomped it into the basin.

I headed into the house, grabbed a beer and two advil and told Ed "I've either solved the problem or made it worse." I sat down and drank my beer before continuing on making supper.

Turns out that my solution worked, so yay for me.

That night I was asleep as soon as I turned out the light and didn't move all night.

This greeted me in the morning:


We could skate on my driveway. Fortunately I have these spike cleats that I put on my boots so I don't slip. Best $20 I've ever spent.

I had to fortify myself so that I could tackle this morning's work. Fortunately I was off on monday.

I cleaned out Lexi's stall and cleaned up the barn. It looked like a bomb went off but yesterday I was too tired to tackle it. 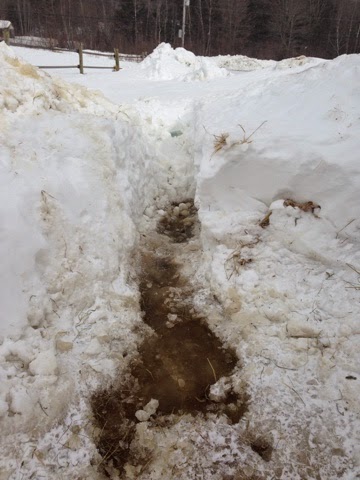 And my other project- digging a trench for the water to melt away from the barn. This drift is about 4 1/2 feet tall so I'm going to 'chip away' at it over the next several days. If anyone needs an upper body workout let me know.....

Tonight it's going to down to some ridiculously low temperature.

On a happier note, Charlante's vetting is Thursday. My vet passed the x-rays, this is for the physical. Now If I could just get shippers to call me back. Also, thank you everyone for the votes on my photo. I really appreciate it.