There was a break in the weather last weekend and we actually saw the sun, omg.

It was very exciting. I'm just not used to day after day of gray skies and rain and it was beginning take a toll on my mental health. 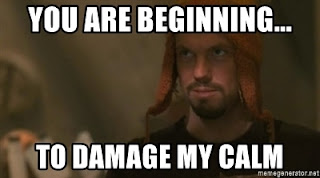 I had some work I wanted to do to the ring. Nothing major, just regular maintenance. It felt good to be outside working. I also took Carmen up to the ring to let her move around and to connect with each other. It was a windy day and she was clearly feeling it. But I could tell that she was enjoying moving out.  I took off her halter and did some liberty work with her. She left me a couple times but came right back. It felt more like she was playing than running away. When I offered the halter at the gate so we could go back to the barn she didn't want to so we went and played some more.  After I gave her a really deep groom which she quite enjoyed.

She's beautiful and she knows it

The next day also dawned clear and cold. But there was rain the forecast for later so I brought Carmen in as soon as the ring had a chance to thaw. This time I tacked her up. I was very careful with her ear and even took off the browband. She didn't react to having the bridle go over her ear at all.

I wasn't sure if I was going to ride, it was all dependent on how the ground work went. She was much calmer than the day before and she felt good so I hopped on to do a 30 minute ride. It had been a few weeks since I rode so things felt a bit rusty. I had tacked her up in the spanish saddle in case she did anything silly.

As a ride it was nothing to be excited about but I was excited to have ridden. The work I had done before her little break was all still there. Although I had to remind her a few times that we half-halt. A few times she threatened to blow but I just half-halted and carried on and she gave that idea up.

It felt good to sit in the saddle. This time of year is hard on me anyway and with her surgery part of me was playing out every worse case scenario. To have this go smoothly and that I could ride about 9 days post surgery felt like a win.

Now it's raining again and I am so over it. It's the time of year where riding becomes hit and miss but that's okay. We shall see. I did send a message to Jane to see if we can get the weather and stars to align for another lesson.....