Hold Onto Me: Surgery Recap

Carmen wanted me to make sure that you all heard about how amazingly awesome and brave she was. I need to also give a warning that there are some photos in here that some may find disturbing. I don't have anything really graphic or gross but I realize that that is my perspective. (back story on today's post is here)

I am so relieved that this has been done. You know how when you are equally dreading and looking forward to something how time seems to crawl and fly at the same time? That was the case for November. I had hoped to get some rides in last week but the weather was too gross.

One of my big worries has been Carmen scratching and ripping out her stitches so I asked Ed to enclose her stall. She is not a fan.

I know it can't stop all scratching but it will help. This morning I brought both horses in a bit early because it was pouring rain (like honestly, could it stop raining? Please?). Irish was not sure why he had to be stuck inside.

Carmen was highly suspicious when the vet rolled up but was so well behaved. She got her first cocktail and, while it was working, the vet shaved her ear. She tried to put cotton batting in her ear to lessen the sound but Carmen was not having it. So we rolled with it. Carmen needed a twitch too but she calmed down when I put my hand on her forehead. She got a second cocktail when the vet started to freeze her ear.

When the vet started her work I was standing on Carmen's left with one hand on her halter and one on her ear, holding it in place. As time passed Carmen became more and more heavy in my arm. The vet offered to use the head stand but every time I tried to take my hand away Carmen would object.
As I held her head I had the strongest sense of deja vu. I then remembered that, back in September, I had some dreams of Carmen where she was over a deep ditch and I was hanging onto her telling her that I had her and wasn't letting go. Feel free to think I'm a loon but this is not the first time I have had dreams like this about my animals.
So I stood there holding her while my arms were aching but it felt right to me. Normally I struggle with boredom having nothing to occupy my brain. But I felt very content to stand there and be with her.
Partway through I could feel her eye starting to move.
You know in those movies when the dragon opens it's eye and you know that chaos is going to happen? I said to the vet who went and got another dose for Carmen.  Any other horse would be on the ground with the amount of drugs she can handle. I joke that she's a typical spaniard and can hold her liquor.
Finally it was out.

The stitching went quickly. Carmen has two layers: one under the skin and then her skin. 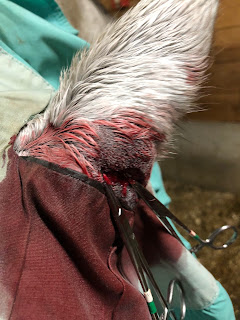 She got a shot of penicillin and banamine and we were done. I think it was 90 minutes from start to finish.

Some good news: the vet, on examination, determined that the lump on her muzzle was just a cyst and could be left alone. Other good news: all of this is being covered by my insurance (except for a deductible). So that's a major relief.

After Carmen stayed in her stall, letting the last of the happy juice leave her system. She was pretty groggy but within 45 minutes was back to normal. I had a fly mask to use to protect her ear but the vet wasn't a fan. She told me to go and buy a large absorbine one. The local feed store went rummaging in their storage and came out with one. I got it for half-price but when I put it on it was clear that Carmen hated it. So I took it off and put on the other one and she was fine. I'll see how it goes but if it works I'll leave it as it is. I'll figure out what to do with the WB size fly mask.

I am so relieved that it went well, that Carmen was cooperative and that it's all over (except for the aftercare). This is why it's so important to teach our horses to accept things they don't like in a way that builds trust. I don't mean making them tolerate but to work with them over time so that they understand that it will be okay.