The Path to Peace: Part 2

First of all, thank you everyone for your kind words over d'Arcy's passing. He was a very special dog and we have so many memories of him. As hard as it was to make the call to the vet I am at peace with it.

In my earlier post: The Path to Peace: Part 1 I talked about applying my plan has been so beneficial in working through stuff with Carmen.

The trick is applying it when in the saddle.

It's easy enough to deal with a bolt when I'm safe and sound on the ground. But being mounted is a whole other kettle of fish.

My whole plan is based on the idea that her behaviour is to achieve escape so in the saddle I can never reward the bolting/spinning/balking with backing off the work. I can only reward her try.

Honestly, this is fucking hard. Mostly because I don't want to die.

Hyperbole aside, I don't want to be hurt. So my plan has been when she's being resistance in a particular corner (it's almost always a corner) my demands go up until she yields, even a little bit. Then the rest comes.

This plan requires me to be very very aware of my own contribution to the issues. Mostly it's my seat. When Carmen gets tight and tense I do the same. This creates a death spiral that doesn't end well. So I've had to consciously suppress my lizard brain and relax my seat. I know intellectually that it's easier to stay with her when my seat is engage and not hovering above the saddle because my legs and seat are so tense but it ain't easy.

Carmen gets tight and tense.
Lizard brain: oh god, she's gonna blow, I better get ready.
Carmen's Lizard Brain:  see you agree with me- this is gonna be bad.
Me: relax the seat and give the inside rein
Lizard brain:  NOOOOOOOOOOOOO.
Me: just.fucking.do.it.
*relaxes seat*
Carmen: oh, I guess it's okay. phew.

At this point I'm pretty much as the stage of 'conscious competence' with this. Which means that I can do it when I think of it. The other part is to not avoid anywhere because she's reacted. It's okay if I don't go there from the beginning and work my way there. Although I try to not do that either.

I use the ground work to get her with me and then mount. At the very least it gives me a sense that she can go everywhere and be calm. This tells me that when she's great on the ground and not in the saddle that I'm on the right track of it being work-avoidance rather than fear.

Interestingly enough I get rides where everything is fine. Like my lesson the other day. She was tight in places but worked really hard at listening.

This morning I got ready to ride early. I lunged her first and she was perfect. And by perfect I mean completely relaxed and tuned in. So I got on and it started okay but on the second time walking around the outside she gave a big spook and a bolt. I think at a butterfly. I realized that I should probably have worked her a little harder on the lunge and, as we were spinning, decided that I would dismount and lunge her.

Except that she refused to stand. She would halt, and as soon as I went to dismount would start to bolt. It was getting really hairy. She was backing up (which is a throw back to two years ago) and just generally not letting me get off safely. Fortunately, Ed was outside and I called him to help. He came running (I never call him) and I asked him to hold her while I dismounted. As soon as he took the reins she stood.

I hopped off and she cocked her hind leg to relax. 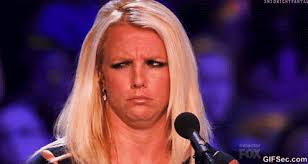 Let me be clear, I actually wasn't angry. But I was done with this shit. Just done. She doesn't get to decide if she's ridden, where we go or what we do. Period.

I put the lunge back on and I put princess' ass to work. She tried to bolt a couple times and once there were heel marks in the footing where she dragged me. I didn't care. I worked her up and down the ring until she was 'yes ma'am'.

I then got back on. Walked 3 steps from the block, halted and got off. Then walked back to the block and got back on.

We worked up and down the ring. I wasn't backing down and there were a few instances of me doing a pony club kick on the inside to get a bend.

Funnily enough my seat stayed relaxed pretty much the whole time. And my leg stayed on. When she balked I booted her forward or gave her a smack with the crop. When she was good I praised and we took a break. A couple times she tried that whole backing up crap and I just backed her ass around the ring and then booted her forward. In the end I had her listening and in front of my leg. She wasn't super relaxed but I didn't care.

I halted her and leaned forward to dismount and she started to move off.
*sigh*
I booted her right into a canter from a stand still and made her canter 5-6 times around the circle. I then asked her again to halt and let me off. We repeated this a few times. If she moved I immediately booted her forward into a canter and around we went. If she didn't want to stand still, that was fine with me. After 3-4 times of this she didn't move a muscle when I dismounted. I sent Ed a quick text that I was done so he could head out to church. I figured he was waiting to make sure I was okay.

So what is going on? There are two possibilities- one my plan isn't working. Or I am dealing with a worsening behaviour because her old tricks aren't working. It's not unusual for behaviour to escalate before it improves. I believe that is what is happening here. And the reason I believe it is because of how calm she is on the ground. It's clear that she is not frightened of the ring. I also can see her learning to relax through the corners so I know that idea is settling in.

She doesn't want to and is throwing a tantrum. All the things that used to work are failing to produce the relief she's seeking. When she's with me it feels so good. But peace is not alway easily won. I've had to dig deep in myself and work hard on my riding. Not to mention courage. And I have to be prepared to get off and work her from the ground. All of this I am doing to the best of my ability.

The timing sucks because our last show is this coming weekend. But oh well. I will throw my safety vest in the trailer just in case. What could go wrong anyway?