The Girl with the Curl

There was a little girl,
Who had a little curl,
Right in the middle of her forehead.
When she was good,
She was very good indeed,
But when she was bad she was horrid.
~Henry Wadsworth Longfellow~

After Sunday's ride I ended up giving Carmen three days off. I wasn't feeling the best and decided to just have a bit of a break. I also figured that a break for her in the middle of summer would not be a bad thing.  Thursday I decided to lunge her before getting on but she was fine. It was a good ride. She started off pretty sluggish but as we progressed she became more forward and up. Not in a bad way, in a good way. I was pretty pleased to feel her offering lengthens on the trot diagonal and encouraged her to do so.

Friday I was to have a lesson. I started warming her up before Shanea arrived and she was pretty mellow. Shanea arrived and I was telling her about how things had been going. I started to walk up towards M while telling Shanea that I've been really focussing on sitting up and back on my rides, especially when she tightens, when, suddenly, Carmen startled and spun the other direction. I had been sitting up so went with her, although losing my stirrups. WTF?! I said. That came out of no where and there was nothing to indicate what had startled her. She walked back to M pretty nicely but was definitely feeling jazzier. So I put her into trot and we started to work. I laughed and said 'see, good thing I was sitting up!'

It was a very interesting lesson. Every time she hesitated or balked I applied the theory of 'more forward'. Soon we had this lovely, swinging trot. It felt great- not rushed, pushing from behind. 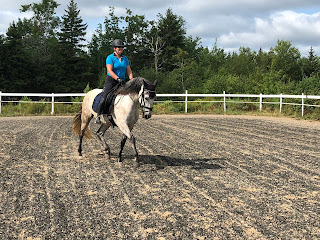 We picked up a canter and headed down toward A. Just as we were coming up the corner she began to stiffen her front legs and crow-hop. She then spun and took off. Where the fuck are we going? I asked her but she just kept spinning in different directions. I steered her towards the fence and made her come to a stop.

We came back to that corner because I'm just not buying that she's frightened. In fact, she didn't even feel frightened. It felt more like she was looking to get out working. Which is fair, because in the past that would have worked. But now I'm not giving in and the only thing that leads to a break is listening.

And so we had a lesson with so many really good moments with some rather hairy ones.  We played with the counter canter loop and it was pretty easy for her. Even going into the corner that she had labeled as 'dangerous'.


Our canter lengthens were pretty good as well- and by good I mean not wild and she came back pretty easily.  Even the trot lengthens were not so bad- really good from F to H, not so hot from M to K. The difference being in Carmen's head, not her body.

We practiced the leg yields to X and back to the rail. At first she couldn't focus on what I was asking and go annoyed. The solution was to drop to walk to get the result I wanted (actually leg yielding) and then were able to stay in trot.

In the end it was a good, albeit fraught, lesson. I gave breaks and rewards for every 'try'. For every evasion the leg came on and we went FORWARD NOW. We ended with her relaxed and chilling in the 'scary corner' which shows just how she truly felt about it.

I'm actually thinking of riding in some small spurs. Not to get the go but to have some teeth when she blows against my inside leg.

When I was young my mother used to recite that poem to me. I think I have an inkling of what she was trying to tell me. I know that talented horses can be difficult. I also know that we are making progress. Of course I want it all right now. I don't want her to lose her fire, I just want to have more control over it.  What Carmen has to realize is that I've had a lot more practice. 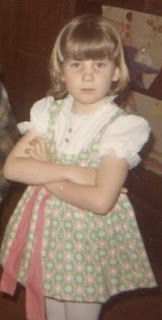