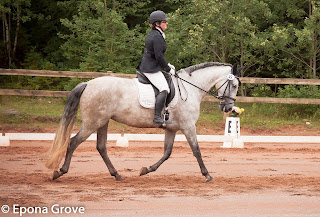 I want to thank everyone who gave me kind and supportive comments about my show experience- both on FB and on blogger. I do recognize that it was just one day in a show and I really do need to put it in the perspective of our whole season which has been very successful.

I can get a little driven in things I pursue (shocker I know). When I was in University and saw that I have made 95% on an exam my first thoughts were 'what the heck did I miss?'

So it's not surprising that I viewed my inability to get Carmen on track as a failure. But my rational brain knows that it was a learning experience. That is what I would tell myself.

So I've been thinking a lot about this and not sure how much sense I will make. Because I don't think our test ride was about fear. The incident in the warm up was based on fear. For whatever reason, she found the walker with his dogs super unnerving. While I will concede that she was definitely wary about the open door in the ring she is not afraid of the ramp or that corner. We've ridden by it so many times and I can stand her there and she is totally relaxed. I honestly think that she spooks when she doesn't really want to work. If I get too reactive it escalates but I also can't have her bolt so it's a fine line and one that I don't always get right.

I have to be okay with not having it right all the time.

When I said that Carmen's 'nope' is dangerous, I wasn't really meaning in the ring. My biggest fear is that we will experience something like that when we're out.

I do recognize that she is far more rideable then ever and that sometimes regression will happen.

I do want to focus on the fact that I was able to address it and show her that this behaviour is not the answer.

I took Monday off. While I don't know that Carmen needed a day off I really did so I had a nice and lazy day visiting with family and puttering around. Monday night I set up a small course of obstacles in the ring to play with.

It's hard to tell from the photo but I set up cones for weaving, an L to back through, a landscape rail for side passing, two jump standards to pick up a water bottle and bring to the next one, three cavalettis 12 feet apart, a rope gate and my bridge. Julia joined me to play and despite the heat we had fun. Carmen started off a bit spooky but I ignored her and played around the ring. When she would get distracted and trip over the cavalettis (at walk or trot) I just supported her and let her figure it out.

Backing through the L was interesting. I can back Carmen up with little difficulty but as soon as there are poles involved she gets really frazzled. And no, I don't think it's me- I honestly feel relaxed. I tried to break it down to step, halt, step halt but she began to fizz and spin. So I put her in a trot circle until she settled and then offered the halt. After about 10 minutes I was able to do the back 1 step, halt, repeat through one part of the L and I gave her a ton a pats. She looked at me as though to say 'is that it?'.

Honestly, I think she gets frazzled if she's not sure of the answer or if she thinks I'm going to get after her for not doing it. After we went for cool down hack in the woods and she was on a loose rein and relaxed.

Today Carmen was back to her old, calm self. I'm sure the heat and humidity helped with that but it was nice to ride a horse that met me half way. We played at schooling and then incorporating the obstacles. It was fun. We even cantered the cavellettis- twice! It was so cool to get into 2 point and let her go through. I could feel her adjusting her stride to make it work and she didn't even get frazzled or annoyed with me.

I decided we were done so we did the rope gate and stood on the bridge waiting for Julia. I felt Carmen begin to stamp her feet and was surprised because this is not like her. I looked down and saw a bunch of wasps coming up from under the bridge!

CRAP! I walked her off and she was all 'meh'. Which is surprising because I would view a bunch of angry wasps as a legitimate excuse to run away.

Someone explain my pony to me please.

We hacked off into the woods, again on a long rein and she was as mellow as could be.