I didn't ride Carmen at all last week. Between weather, work, my medical tests and her teeth appointment it just wasn't happening. I had hoped to ride with Cynthia on Saturday but we had bitter cold and snow so we went Christmas shopping and had lunch out instead. After she left the weather markedly improved but I was home all alone and I thought that given the bolt last week I probably should have someone around.

I took the dogs for a walk and I realized that the snow was powdery and perfect footing for riding. I sent a text to Ashley inviting her to come on Sunday to play. She was game and brought along Julia. The sun was shining and it was a lovely winter day except that it -5 celcius, with the wind the windchill was much colder. I thought that we might be crazy but it was still too good a chance to pass up. I put on some layers and we got the horses ready.

Both of them were full of piss and vinegar energy and enthusiasm. Carmen was definitely tight but I put my whole attention on keeping her attention on me. 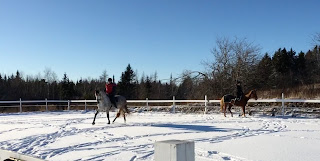 AS we were riding Shanea came by to visit (not teach but I'm hoping that she can soon). She gave some good advice for us which was essentially inside bend and ride forward. I was struggling to not ride defensively given last week but I wasn't horrible.

But she didn't bolt. Or even give a big spook. I could feel a real difference with the contact since getting her teeth done. I do think that this added to the issues I was having because today felt more like our normal excitement. 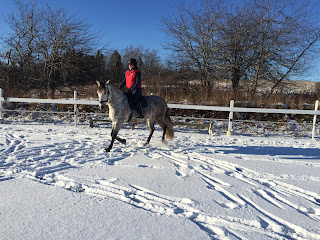 I love riding in the first snow- the tracks are so fresh and the horses really pick up their feet.
Today was not about schooling anything- it was just about playing in the snow and enjoying the time.

Look at Irish having a ball. I need to do a post on some positive things about him that have been happening.

Shanea drew a heart in the snow at one point. 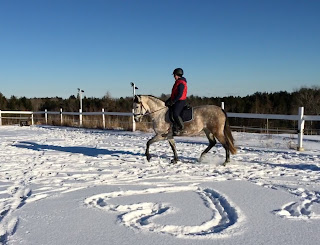 Despite the cold I was toasty and warm.

The footing under the snow was nice and solid. I didn't mean in my last post to indicate in anyway that my missing Steele meant that Carmen was not my heart horse. In many ways we really suit each other.

After riding we went for a little hack in the woods. The horses were up but really well behaved. After  Ash, Julia and I warmed our hands and bodies with some hot chocolate.

It was a cold but magical day and just what Carmen and I  needed. I hope it was good for Ashley and Irish too. 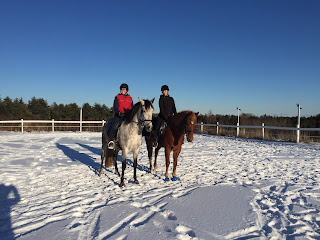