I was able to take Monday afternoon off from work. Cynthia's daughter, Ashley came out to ride Irish.  I could tell right away that Carmen was more of like her normal self. We had a nice ride. Not that she wasn't spooky in some areas but it wasn't anything to worry about.

I had left the poles up and I am really enjoying playing with them. I like how they give us something to think about. I'm learning to not try to micromanage her over the poles and let her figure it out on her own. She really was starting to figure out that sometimes she needed to contract or extend her stride length. I think she quite enjoyed the cantering over them. Or maybe that was me. Hard to tell but fun was had.

As we were riding, Ashley's friend, Julia showed up. She had brought a helmet and hung it on the jump standard outside of the ring. Carmen took one look at it and decided that it had materialized and was clearly up to no good and most likely dangerous.  She spooked into the middle of the ring and I dissolved into a puddle of giggles.
Julia looked at me and smiled.
Me: Oh Carmen. You are something else.
Carmen:  I saved us. I do it all the time and you have no appreciation of it.
Julia:  She looks so proud of herself
Me: Yup. Wanna buy a horse? Three dollars and she's yours.
Carmen:  humph.

We carried on riding and she was very good. Nice and forward, although I would have loved to be have her neck a little longer. At first she was trying to figure out why there was this person standing in the ring but not giving instructions.  She was clearly puzzled. After a bit I stopped and asked Julia if she wanted to hop on. Turns out that she did. I did my usual disclaimer which is that I can't promise that she won't fall off.

Ashley was riding Irish and he was feeling quite perky and happy to be out. Ashley had him going really well. I think that they both needed each other.

Carmen and Julia did very well together. I gave instructions. I had to be careful- every time I stopped walking Carmen would stop too. That was fair- it was all based on our groundwork and her responding to my body language. I enjoyed watching Carmen go. I can see a real change in how she was going. 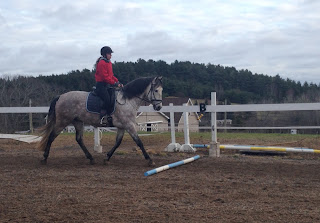 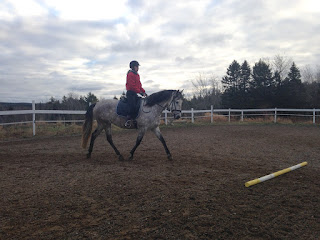 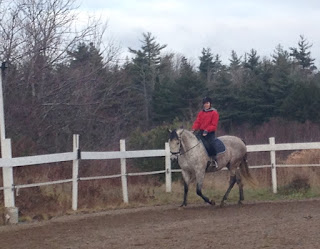 Watching her go I felt a sense of pride - she has lovely movement naturally and I have had a lot of help but in the end I'm the one in the saddle and it feels good to see results.