I had some major 'aha' moments at the clinic. I was intrigued by how not-spooky Carmen was. I believe that she didn't have time to look around and become scared because there was so much going on right in front of her. I also learned that I need to give her some responsiblity for her own feet and expect that she join in the program.

I was interested to see how this was going to go with a lesson I had booked with Shanea on Tuesday. That day turned out be really really hot. I figured that should help reduce any spookiness.

It's amazing how much braver I am and how I don't take Carmen's spooks seriously. I mean how serioulsy can you spook at a waving frond of golden rod after you've ridden your horse over a teeter totter? From that you can take it that Carmen did pull some spooks and that I was unimpressed and just would bring her back to the task and carry on. I found it fascinating that spooking was worse as the lesson progressed and she became tired.

Like I said, it was HOT and Carmen started out stiff and behind the leg. We spent a long time at the walk getting her to go forward and stretch and flex. I worked really hard on not retracting my hands when she retracted her neck. Instead I was to put on leg ask her to step forward. It took a bit but it actually started to work. 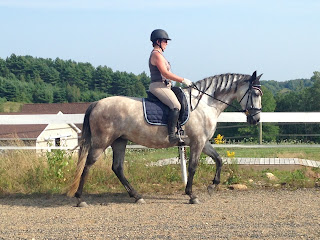 From there we went into trot work. I managed to set her up so that our transitions were straight and there was no flinging of hindquarters. We did a lot of work on leg yields. Shanea really wanted me to let her open her shoulder and move over and I was stuck on the hind legs. We sort of got it but I think it's coming.

At least Shanea didn't fling her hands up and leave.

So that's a plus. 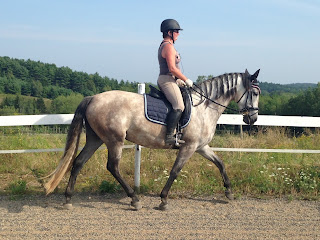 As Carmen tires she curls behind the bit- which makes sense given her conformation. Then she would fall on her forehand and lose to flow. I was to sit up and open my chest to help her come from behind. I was amazed at how well that worked and how I could actually feel her rock back. It's okay that she can sustain for long- it's a strength issue not an obedience issue. Shanea really wants me to feel what she needs to help her and then, you know, help her. 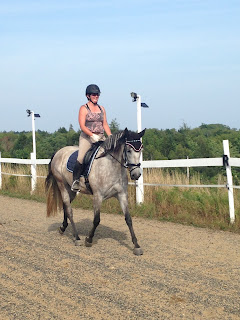 As the trot work progressed there were a couple big spooks- especially at troll corner. I was not flustered by them at all. I would just bring her back and try again. Lots of prasie and pats when she was behaved. She did do one mini-bolt (really mini) that I corrected and then back we went. I honestly bellieve that she has learned this as response because it has lead to less work in the past. So we will get there. My abs were burning by this point so I'm sure that she was feeling it too. 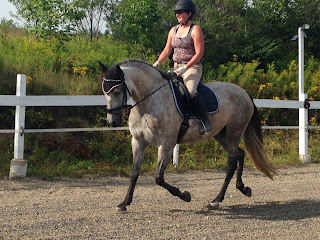 We did a little canter at the end. At first she wasn't so sure that canter was on the menu today.  We had a walk break and I picked up the reins and asked her to trot. She picked up this little jog. Shanea said 'oh did you pick up a western jog at your clinic too?' I stuck my tongue out at her (#mature).  I asked for canter and she ran through the aid. I brought her back and asked again. She pinned her ears and picked it up. (don't you know it's too hot for this foolishness?).

It was interesting, as we entered to troll corner she kept trying to duck away- just like at the show. I said to Shanea- this is what she was doing at Five Fires/ Essentially throwing her shoulder against my leg and rein and running through.  This was perfect becasue we now had a chance to tackle this in a non-show environment (where it's far too late). The trick was to sit up and bold and ride her through the corner using half-halts in the corner to keep her on the aids and prevent her being able to use her body to evade.  When she went through the first time I praised her highly amd gave her a pat but we kept cantering. 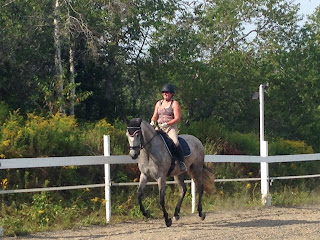 We then did the same to the left and I brought her back to me and then walked. Shanea said 'we still have 15 minutes left' and I may or may not have said something along the lines of 'I don't care'.

Which wasn't exactly true but we were done. So I said 'this would be a great time to work on the stretchy walk'. Which we did. Shanea showed me that if I let the reins out but kept the bend in my elbow I would still follow the bit and have her connected. And, miracle of miracles, she was much happier and listening to me. And we did the free walk in all the spots that were so very scary and impossible before. Except that they weren't. 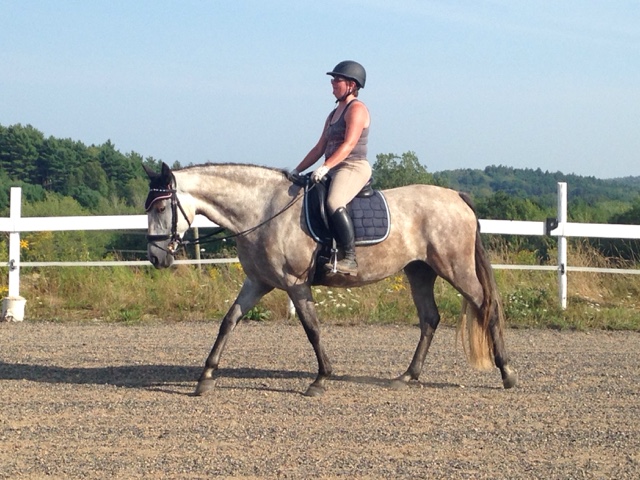 I was happy with our ride. I hadn't expected Carmen to be transformed into some magical zen-unicorn. She will always be Carmen. But I am changing and not reacting and it's becoming a non-issue. Of course all that may change at the 'big' show we're going on the September long weekend. But Shanea will be there and I am gaining some really cool tools.