The Death of Me

I swear that my horses are going to be the death of me.

Irish has been NQR since the beginning of August. It would come and go and to be honest I just figured it was an abscess. Before I went off to the clinic he was really off so I figured it was ready to burst. But when I came back he was still three legged. I checked him all over and there was no heat or swelling except I found a solid lump on the bottom of his hoof.

Like what the hell horse? What is this lump? I googled it. And instantly regretted do that. I then called my farrier with the hope that he would explain how perfectly normal this was and entirely common. But he was unsure and told me to call the vet. I called and left a message- the vet I usually use was off but the other equine vet was working.  She called me back and was unsure as well. And explained that  she's pregnant and is not doing large animal calls. She advised me to bute him- but I can't because of the previcox.  She told me to cut out a piece of styrofoam and fit it to his foot with duct tape. Yes, because I have that lying around.

She also advised that maybe I should get x-rays. I had an immediate visceral reaction  of no. Before you judge me - hear me out. Irish is in a delicate balance right now. And he has terrible feet. If I x-ray and find some horrible thing (like navicular) I will have to make some decisions about quality of life. Let's be honest- there are only so many things that he can handle at once. So I am taking the 'no news is good news' approach.

I took a photo of his foot and sent it to my farrier. I love my farrier because he came out yesterday. He was still not sure what it was but is thinking that Irish damaged it and the sole grew too much in that one spot. He trimmed and reset his shoes and did some pour in cushion stuff- sort of like rubber cement. He also told me (I was at work and he phoned. I would have come home but it was too late) and said that Irish was walking okay when he brought him in.

Really? Because this morning I had to force him to walk out of his stall. WTH horse? He then said that Irish was acting very spooky and jumpy which is not like him at all.

I came home right away and I was not happy with how Irish was looking. He was definitely in a mild colic and very agitated. I brought him out and realized that I needed to cool him off. I began to hose him and as the water washed over him he became more and more relaxed. I then gave him some 'chill', sprayed him with fly spray and turned him out into the front paddock so I could watch him. He settled into grazing and seemed to be fine. He was also definitely more comfortable. I think I caught it before he got worse.

By supper time he seemed to be perfectly normal so I figured that it would be okay for Caelen to ride him at the walk. I am a fan of movement if a horse can handle it. I brought Carmen up to ride as well. Caelen's mom (my sister) has arrived with the rest of the clan (husband and 3 more children). My youngest niece is in love with Carmen and wanted to watch. I told her it was okay as long as she stayed still and didn't spook us. With 20-20 hindsight I should have told her to go and get her mom. It's been a long time since I had a seven year old. Anyway, Carmen and I were cantering up the long side and I didn't see Carleigh crouched down by a post. As we went by we scared her and she jumped up with a scream. Carmen leapt sideways and I was completely caught off guard and flew off landing on my right hip and scraping my right elbow. I thought at first I broke something but I was just really sore. 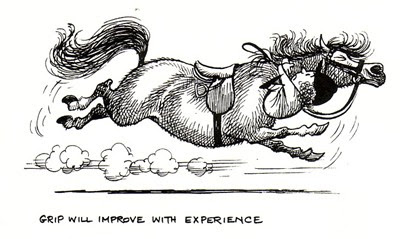 Poor Carleigh was very upset and kept apologizing. I held up my hand and said quietly 'it's okay. I need you to go back to the house now'. I then limped over to Carmen and went back to the mounting block to get back on.

Needless to say we were both a bit tense. I realized I needed to get her focussed on me. I spent a bit of time working on our 'whoa' because obviously that was a bit rusty. Then we worked on flowing forward and keeping her 'under' me-even in her spooky corners. By the time I was finished we were both a bit sweaty but definitely connected.

I am sporting a livid bruise on my hip and one stretching across my butt that is an incredible shade of red and purple. And it's sore- so is my neck.  But her spook was legit and I cannot blame her for it. I had been giving her some rein to get her to stretch into it and that gave her a door. It does tell me that I need to get her to stop running through my inside hand/leg - that is not a good thing for her to learn. I'm open to suggestions.

This morning Caelen and I rode and Carmen was awesome. I spent time at first making sure that she was straight and connected and under me. I found her very stiff in the poll going to the right and that was the side I came off on so she might have had a pull muscle as I grabbed the rein. I worked on getting her to stretch and soften. Finally she relaxed and we were able to get some half-decent work in. Caelen and I then hit the trail in the woods. Carmen led the whole way through the two trails and seemed to really enjoy it. I find that on the trail, when we're leading she really tunes in to me and takes direction. Which is so much better then her making decisions.