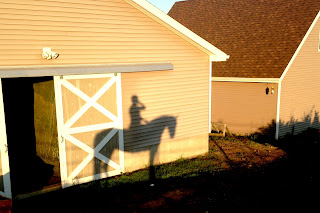 Thank you everyone for your concern. My bruise spent a few days becoming quite spectacular. It still hurts a bit but nothing else seems to be an issue so I'll take it.
Riding a sensitive mare is lot like chasing shadows. As soon as you shine a light on thing it disappears.

We were away at a wedding over the weekend so Carmen had a couple days off. I think the rest was good for me and, probably, her.  Last night I didn't get to ride until around 7. Typically this would result in Carmen spooking at shadows and things. I've been working on not reacting unless her reaction is a big spook/bolt. Otherwise I carry on with what I'm doing.

The last two rides I've been carrying a small jump bat so that if she starts to use her shoulder against me I can quickly give her a tap to tell her to knock it off. Otherwise she bulges the shoulder in and that can lead to her leaving to the inside.  I had to give her a few taps on Monday and she pitched a bit of a fit about it.  Today it was a non-issue and didn't need to be used once- as soon as I asked her to bend to the inside she complied.

The trick is to not get tense when she does but not get left behind if she launches sideways. Today she gave a couple spooks but I completely ignored them and carried on. I did take note of the spots where she reacted and used those spots to rest.

What I had to tell myself is to not change my plans because of how she behaved. Part of her spooking is learned- she learned if she does that I will back off. So today she spooked in the corner. I ignored it and continued with my plan of a shoulder-in to straight to haunches in down the side. In the past I would try to get her soft and then ask again. Not this time. So it was a pretty horrible shoulder in but I  didn't care. The work does not change because she spooks. The larger plan may change but the moment to moment plan doesn't.

I'm also working on keeping my legs on through it all  because I've been letting her get behind the leg. I'm good about getting after her when she's slow behind the leg but not when she's fast. I tell her that she can take bigger steps but not faster ones. This helps her to use her hind end rather than speeding along stiff and braced. All of this means that I have take responsibility for riding her correctly and not letting myself be floppy.

I've also been trying to keep her mind busy so that there's not time to get horribly distracted. I'm also not backing down on the ask to flex to the inside. She does not have to look outside for monsters and she's gotten good at barely flexing but really looking out. I'm not a fan of 'headset' but her looking out is not doing either one of us any favours so it's become a non-negotiable.

On Monday after my ride I dropped the gate to walk down to the barn. She was quite keen to leave so we did some circles and then in and out of the ring so that she doesn't get the idea that she can rush out. I then made her stand half in and half out of the ring until she settled and seemed to be willing to stand there as long as I wanted. Then we walked to the barn.

Today when I dropped the gate she was calm and quiet. This time I took her to the right to do a small hack. She was a bit tight going by the tall grass. I just took a deep breath and relaxed. She stayed tight but kept going. As we went into the woods and on the trail she relaxed more and more. Which tells me that she's not a true 'spooky' horse. Because with the leaves and shadows not to mention going by a shed, manure pile, wagon and through a gate are all potentially spooky things. But she didn't even blink. Even though we were all by ourselves.

I plan to ride her each day leading up to the show. Experience tells me that she does better with that then being rested.

And guess what I picked up on my way back from the wedding: 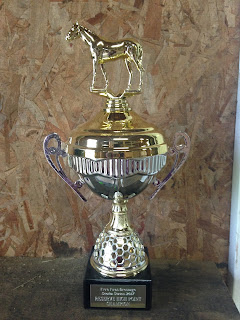 I have never won a trophy showing horses before. But to be honest, my biggest thrill is what it represents. Carmen and I exceeded all of my expectations. It represents not only the work I've done but also that I kept the faith that we can do this thing.