This week was interesting.

I gave Carmen a couple days off for us both to regroup. On Wednesday Caelen and I tacked up the horses to have a ride. But when we were walking out of the barn it was clear that she was off. I took Irish from Caelen and had her walk Carmen around so I could see. She was very lame.

I examined every part of her and could find no evidence of heat or swelling. I started to calm a bit thinking it might be an abscess.

But Carmen has never had an abscess (as far as I know). What followed was a series of texts to my farrier with me trying to sound rational but actually freaking out and him trying to get me to calm down. He lives far away and we're part of his circuit so it's not like he could come out (although I tried).

I went to bend that night with my left brain telling me that it was an abscess or bruise and will be fine while my right brain was tossing up all sorts of things it could be from laminitis to a tendon tear to navicular.

The next morning she seemed to be much better and walked out to the field she was off but not as bad as the day before. I started to feel relieved. After work she was even better so I brought her out to check her over. After much examination I found a small hole on the inside of her coronet band. I did some soaking with water and epsom salts which she seemed to really appreciate.

On Thursday Shanea texted me to say she was coming my way and I could have a lesson. I told her I wanted to check Carmen first. Carmen seemed to be 99% so I decided to ahead with the lesson.

We started with reviewing the show and what happened on Sunday. Shanea had some advice for me on how to ride it. The truth is that I was skeptical because in my opinion Carmen was just 'no' so there was very little work with. I realize that I have to get her through shutting down on me but it's a work in progress.

The focus of the lesson was to keep Carmen underneath of me and listening. The idea is that the direction gives her confidence that all will be okay. It makes sense to me to work on that - establishing patterns of behaviour when it's 'easier' will help when it's freaking hard.

The warm up was on getting her supple and responsive at the walk no matter the fluttering leaves etc. We then took it up to trot. She did do one scoot on me but other then raising my hands to go with her head I didn't really react and then just carried on like nothing happened. That seemed to end it there.

As always, Shanea took photos with my phone. Caelen also took photos with my camera and I'm curious to see how they came out. For now, here are the iPhone photos:
Not a bad trot but she's wanting to come against the inside leg (and away from the brush). Shanea had me leg yield her over. However, this is the same issue that came up at the show - when she's not wanting to go by a place she does not respond to my inside leg asking her come over which makes me pull on the inside rein and we go down from there (#downwardspiral). All that said, this photo looks better then it felt. 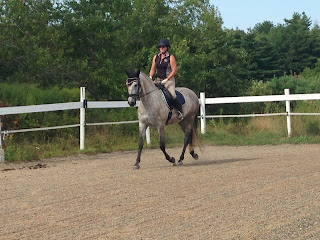 Now this is better- nicely bend and a relaxed frame. 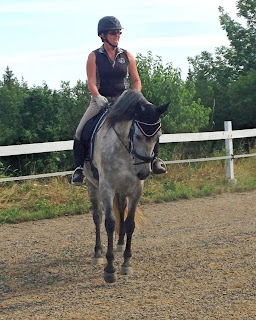 Shanea had me use my seat and legs first and not my hands (oops. I know better. sigh #ridingishard). I was intrigued to see these two photos. They show me asking her to half-halt and the next one is her response. You can see her soften and bring her back up. 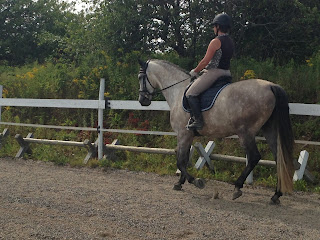 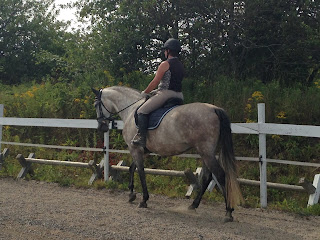 We worked a lot on transitions and me helping Carmen to keep her balance. What became clear to me (and no this is not new but I finally understood in terms of the 'doing') is that when Carmen is unbalanced she becomes uncertain and more likely to spook/spin etc. Which means it's up to me to balance her even if she's not always sure that's what she wants.

We finished by coming trot-canter-trot transitions. Carmen's right lead canter is a work in progress. And she started off being very very tight.  Which is where I had to be so very careful with my seat to go with her and help her relax her frame and use herself. It was interesting to ride- because she started so stiff it was really hard to not be stiff in response.

Of course being stiff when I brought her down to a trot the transition was terrible and then she was anticipating another canter request and not in a happy way. Shanea had me simply get her balanced and happy again before asking. Slowly I felt her begin to relax and embrace the canter. Once she began to blow I knew I was getting there. Probably some of the best right canter we've had ever:

We then worked on the left lead canter. This was easier for us but still required some work to make sure that my seat was active and following.

Once we had a few really nice canter-trot transitions without her falling on the forehand we ended the lesson.


I really enjoyed this lesson. It felt like we were really helping Carmen understand how to use her hind end and lift her back.

We might actually be able to do this dressage thing after all.