"There's no damn business like show business. You have to smile to keep from throwing up" ~Billie Holiday


Well that was quite the weekend. Hang on to your hats because it might be a long post- there's highs, lows and even an unexpected twist at the end.

I headed off for the show with high hopes. Carmen and I have been working along and making progress. The trip there was interesting and could be it's own blog post. But it would be a post about how drivers are stupid and should just get off the road and who really wants to hear that rant?

Carmen settled in really well and our ride in the ring was lovely. There was zero drama and she was just so settled. I kept it short because it was hot and humid. Caelen and I headed to the hotel. Because it was the long weekend I found one hotel with a room available. It was very basic and there was a sign that said that the hot water would only last 15 minutes in the shower. But it was only 15 minutes away and close to everything.

I planned for a 35-40 minute warm up for the first test. It was not enough. Carmen was blowing through the aids and not really all that keen on listening. But we went and did our test and really it was not bad. There were places where she was more resistant and our scores ranged from 5 (stretch trot which was legit because we had maybe 2-3 strides of reach) and 8 (final halt- nailed it and our medium walk!) . I got an 8 on my position and seat and 7.5 on effective use of aids. I was thrilled with that. The judges final comment was "lovely mare- lots of potential. Needs to get straighter in right canter and more supple over back. Lovely moments". Our final score was 67.5. Totally fair. 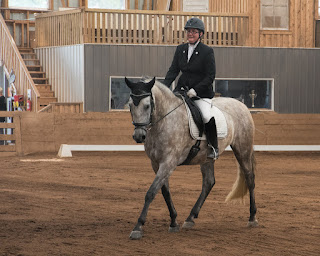 Our next test had a better warm up and I was feeling more ready.
I felt pretty positive about the test- it felt smoother to me but there were some moments of resistance. There was one funny Carmen moment that I posted on FB:
Carmen & I: Trot to B and then circle- no problem.  Carmen: OMG WHAT'S THAT?Me: it's a beam of sunlight Carmen: so duck away?Me: No, keep trotting and bending
Carmen: so jump it then
Me: Just keep going. It's a fricken sunbeam
Carmen: got it- jump with the front and twist the hindquarters around.
Me: *sigh*
Carmen: phew. I saved us. You're welcome.

Our final score was lower: 62.9 ranging from 5 (stretch trot) to 7. Once again I scored an 8 on my position. Caelen was near the judge's table and she told me that she overheard the judge compliment my position more than once. Her final comments: "well ridden. Too bad about the resistance. Lovely moments. Needs to get straighter in shoulder for right canter. 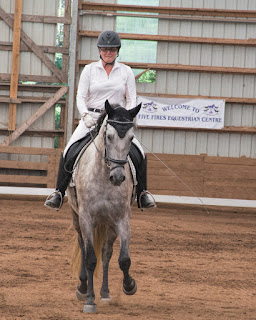 That night I took her out for a brief lunge in the ring focussing on the 'spooky spots' and getting her calm.
I had her comments and reflected and I determined that the next day I was going to warm up focussing on keeping her straight. What happens is that when Carmen gets tense she throws her hindquarters in and will NOT straighten out. I need to establish her responding to my cue before that because in the moment it's useless. I have to say that we had a brilliant warm up. I kept my focus on straight and ignored any spooks or resistance. I praised her heavily for being straight and corrected when she went crooked. I felt her to be 100% on the aids and listening to me.

By which I mean the heavens opened up and there was a torrential downpour as we entered the indoor. I have no idea if Carmen is used to rain on a roof, I suspected she wasn't used to it on a coverall. So I walked her around the ring carefully. It was so loud I had to ask the judge if she rang the bell. You could not hear at all! We entered at A and Carmen was a bit tense but listening. We then turned right. Just past the corner was a door with a gap at the top. Into that gap was a waterfall of water streaming in. Carmen took one look as was 'nope'.

And we then had a ride that really was more like a wrestling match. We circled up by M three times and then I took her down the long side and leg yielded over. I began to talk to her through the whole test.  I figured we had blown it all anyway and that she needed my support. It doesn't appear that the judge heard me. All I can say about the test is that we made it through. We had some moments of her listening- she was really trying. But was getting totally freaked out by the storm. I am not sure how many times I tried to do the canter circle in the middle before saying 'screw it' and heading down to side to finish this disaster.

So that was discouraging. Five minutes earlier and we would have been before the deluge. Oh well.

I put her in her stall to rest. I looked at the rain coming down in sheets and decided that I was not taking her out to warm up ring. I went to talk to the show manager and she was kind and said that she was going to let riders hand walk in the ring during the break. Which was perfect because I was right after the break. Then they realized that the warm up ring would be impossible so they allowed for riders to have a 5 minute warm up in the ring and then ride the test. Since we are all training through first and Western dressage that worked well.

I handwalked Carmen during the break letting her see that the rain coming in. She was tense but was listening. But when I got on we had a disastrous second test. I think it was less disastrous then the first one but can't say for sure because I totally forgot to go get my test. I remember looking at it but they still needed it to place the class. I know I saw scores as low as 4 and perhaps as high as 7/8.

All I can say about the test is that I didn't give up and I didn't come off. I came close to both of those things. I did pick up the last test (see total mind freeze). Our scores ranged from 5 to 7 with a score of 58.86. Once again I got 8 on my position. Perhaps for the velcro seat. Final comments 'well done. Too bad about the tension today. Lots of potential'.

I was bummed and a little upset. Not with Carmen, not with me but that we did not show what I knew we were capable of. It did show us that there is more work (and that Carmen will be able to nail canter pirouettes). But I am nothing if not goal oriented and wanted to do better.

The rain had a lull and the weather was predicting thunder and lightening later. I did not want to be trailering home in that. So I went to the office to apologize and explain that I wanted to leave before it got worse again. Ed had let me know that it was clearing up in our area so I felt that we could drive out of it. I have left a show early only one other time- when my father in law was dying in hospital. I believe that organizers work hard and we, as riders, should be there for the final ceremony. However, Carol was very understanding and gave me a much needed pep talk on how well I have been doing with Carmen. She told me that she was seeing real improvement and gave me details so I know she wasn't just trying to make me feel better. I can't say enough about how great the shows there are and how helpful to everyone.

With Caelen helping we were able to pack up and clean up pretty quickly. The first part of the drive was awful- at times the rain was so heavy you could barely see but after an hour we drove out of it and it became easier.

And the plot twist you ask?

Well when I got home there was a message from Carol telling me that Carmen and I were reserve Champs for the series. I think it was based on your highest score of each of the three show. I was happy with that and will try to get there soon to pick up my prize.

And that was what I did this weekend.

How was your weekend.
Posted by TeresaA at 1:21 PM