On Discipline and Bridges

"Discipline is the bridge between goals and accomplishments" ~ Jim Rohn


Spring has decided to make an appearance and stick around. The peepers have started which is how I know when it's spring.  If you don't have peepers- they are tiny frogs that start to sing in the spring evening. I love the sound.

Our rides are going very well. There are a few dramatic moments but we work through them and move on. I can get her into spooky spots with gentle persuasion and sticking to the plan. Yesterday, while Cynthia and I were riding our husbands were tightening the fence in the back pasture. Apparently that was incredibly scary when they were down by the woods and Carmen bolted and almost took Irish with her (sorry Cynthia). We got it back under control and then returned to work. Not that there wasn't some tenseness at times but she didn't lose her mind and we were able to carry on working with stuff.

Working with Carmen requires that I practice self-discipline. I can't let my emotions take over and I can't be buying into her drama. But I've noticed a big change this year in my own confidence with her. And as we deal with things successfully our confidence grows. Where last year a bolt would have killed the whole ride and probably made me dismount- now it's just a bobble in the session and we can carry on.

I carry treats in my pockets and when she's being very very good about something I stop and give it to her. She likes this and will nicker as I bring my hand forward. It's really cute.  Her freaking out is no longer freaking me out - I just give a laugh and we carry on. I'm not laughing at her and no I don't think leaping sideways is a good thing but she wouldn't be Carmen if she wasn't dramatic and I'm not going to argue with her. I'm just trying to show her that it's all okay. We even went on a little ride around the field with Irish this week. She spooked at a stick on the ground and danced sideways. I straightened her out and gave her a pat It does kinda look like a snake, doesn't it?  and we carried on. She walked on (albeit a bit briskly).

Earlier this week I was riding her and she was being very good so I stopped after about 30 minutes. I took of her saddle and bridle and put on her halter. I then took her out of the ring to the bridge that Ed had built (I finished it last week). My goal is to have a little set up of obstacles outside of the ring so that we can train inside and play outside. 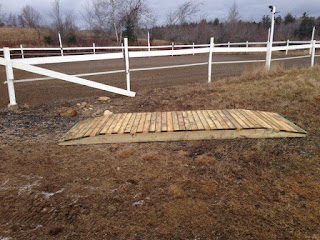 I wanted to start working her with it- I had no agenda with this obstacle- I planned to start slow and see how far we could go. I thought I would approach it the same as with trailer loading- make each step small and easy. Carmen followed me up to the bridge and I let her stop and look at it. She was uninterested but we'd been walking by it for months now so that made sense. I asked her to take one step and put a foot on it. And then back off. Then two feet. Then all four. Then I asked her to walk over it and she did. There was zero drama, my lead line was loose for all of it and we were both very relaxed. With each step we stopped to graze as a reward. We walked back and forth and few times and it was a total non-event. I would have been fine if we just had a foot (or two) on it.

I'm fairly sure I could have gotten her on it last year but it would have been far more dramatic. Now we cross that bridge on our way in and out of the ring and it's easy. I haven't ridden her over it yet but that is soon. And I don't think it will be a problem. But if it is I will dismount and we will try again because that means I pushed her too fast.

Yesterday I received an email that we could now submit our entries to the show. It's great- we can actually do it on-line which makes life so much easier. I sat down and filled out the entry and hit 'send'. And do you know what? I'm excited. Not because of any shiny ribbons we might win because I don't care.  I strongly suspect that our scores will vary between 3 and 8 depending on the movement (or lack thereof). I want us to take our show on the road and have some fun. I enjoy showing and I have missed it. For a horse like Carmen I believe that she's only going to learn to do well at shows by showing.  So we're going.

Discipline.
I'm working on it. 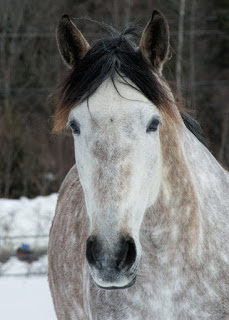 -----------
and for those of you who want to know how Guinness is doing (looking at you Farmbuddy) here's a video- look how much he's grown!