From the Ground Up

It's no secret that I am a fan of ground work. It has been the key to unlocking Carmen under saddle. And I definitely did not do it alone. Royce and Johanna spring to mind as being the most instrumental in teaching me how to work with her.

I now cannot imagine working with her without ground work. For me it starts when I go to get her. How she responds to my cues and body language gives me valuable information on what I need to work on.  For myself I try to keep the 3 C's in mind:

1. Clear- I need to know what I want from her and ensure that I am asking correctly. When she doesn't respond the way I want I stop to think whether it's because she's tuning me out or if I'm being fuzzy. Or on some days it's both.

2. Consistent- It starts in the barn with the ground tying. If I put her feet in a certain spot she doesn't get to shuffle around. When I lapse and do let her do that it colours the rest of the session.

3. Calm- I need to be calm and not buy into any drama no matter how tempting. I'm find the sponge vs mirror imagery working well for me.

Despite my best hopes,  the weather on the weekend sucked. It was cold with a bitter north wind adding to the weather.

Saturday I was determined to work with Carmen. It was clear from the beginning that she was wound tight. Her entire body was rigid as we walked up to the ring and the wind was blowing (not as bad as the day before but still it was a stiff wind).  I worked with her helping her to stay in control and minimize her reactivity. She spooked and scooted quite a few times and tried to bolt a few times but I was able to get her back each time. Not too long into the session I decided that I was not going to ride. There really seemed to be no point. It would have been an awful ride for both of us. Instead I focussed our session on our partnership from the ground.

She never truly relaxed. But we were able to stay in step and she was being prompt and obedient to my voice and body language. I called it a good session and we headed to the barn. I realized that her poll was very tight and stiff. Chicken or egg? Who knows. But I spent some time gently rubbing it and asking her lightly stretch. I then spent a long time grooming and fussing over her. In the end she was a sleepy puddle of a horse.

Sunday was a write off- it was snowing and cold. Sigh. But the kids came to visit and Alec brought his puppy so it was a fun day.

Monday, of course, was lovely. I left work and decided I was not doing exercise class but would ride instead. Carmen was more relaxed from the beginning. Not too bad in the barn although she needed a few reminders to not move around it was less related to tension and more to 'hey Irish still has food I should help him'.  It was breezy and she was thinking that she should be spooking at stuff. I was sure that she didnt' need to and after a bit of ground work she was fine with all of it.

I mounted and she became stiff again. Tight and looking at stuff, ready to run away. I kept my seat in the saddle (no tightening) and rode her positively forward. Or is that forward with positivity? Never mind, you get the idea. Last year I would have gotten upset and tense too.

But not this year.

I know that Carmen can be brave and calm because I've seen it.  But that's a story that requires it's own blog post so I'll leave it for now.

In the past as she would get wound up I would try to ride 'softer' and 'gentler'. But that never worked . This time I put my leg on, put my seat firmly in the saddle (not in a half-seat) and rode her forward. I felt her immediately relax. She needs to know that I'm there. I believe that my attempts to be softer left her feeling rudderless. Now she was not always in agreement with where we were going and thought that a complete counter bend to the right when we were going left would allow her to watch those trees that obviously were not to be trusted. I could care less about the trees but I did care about the bend so I fixed that. And fixed it. And fixed it again.

And in the end I had a horse soft and listening to my aids. I found a spot and jumped off. I thought that I hadn't been riding for long but when I checked my phone it had been a lot longer then it felt. I rubbed her poll and it was soft.

I know that I am afraid of history repeating itself. But I'm going to not worry about what might be and take it one session at a time. 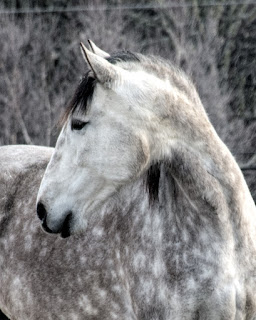