Getting Our Heads in the Game- Part 1

I had arranged for a lesson on Sunday with Shanea. I was really looking forward to it and I have to tell you that it did not meet my expectations.

I headed out the barn early so I could spend some time trying to get the winter's worth of grime off. I cannot wait until I can give them a bath. I also wanted to spend some time. In the past Carmen has appeared to be annoyed by grooming but lately she has been showing signs of enjoying it more- even showing me her itchy spots. I do not often spend a long time grooming before hand but this time I was a good 45 minutes. Even teasing the tangles out of her hair with my fingers.

I decided to leave Irish out in his paddock while we worked. I knew that he might be a goofball but I figured that he had burned out some energy in the morning. I was not wrong and he carried on like his little world was ending. However, Carmen has no issue leaving him and ignores his shenanigans.

I was careful in my warm up on the ground and, while she was bit looky, overall she was listening really well. I played a bit with half-halts from the ground using my body language. It was really cool- when I shortened my pace and tightened my core so did she- when I strode out so did she. If you lunge try it and see what happens.

Just as I was ready to get on I received a text from Shanea that she was running late. I decided to get on and do a long slow warm up. Carmen was definitely leery of troll corner but we were still able to walk all over the ring. When she lost her attention I was able to get it back.  We were circling at the end of the ring and she alerted to the road. I then saw that there were two horse and riders coming down the road.

Uh oh  I thought. I sat up, breathed deep and waved. Carmen watched them walk down the road. I could see Irish watching too. Irish usually loses his mind when horses walked by but Carmen not so much.

I seriously thought about dismounting. Like really seriously. Instead I asked her to walk on.

And she did. With no drama. However, troll corner was still being a bit an issue. Not a huge one but something was there bugging her. Probably mice or birds.  We were walking across the diagonal towards the corner  and I could feel her tensing. I breathed deep and focused on walking her forward without me getting tight.

Carmen showed her athleticism by suddenly spinning around and we were facing the other way. I was literally half off - leaning at a 45 degree angle, had one rein and no feet in the stirrups. WHOA! I said. And Carmen slammed to a halt. Had she continued to bolt I would have landed on the ground.  I resettled myself in the saddle while she waited for me.

I reached forward and stroked her neck. Because guys, this was HUGE. Carmen could have completely dumped me but she didn't. Because I said 'whoa'.

My heart was still pounding from the adrenalin rush but I turned her around and we carried on through the corner and continued our warm up.

But with more confidence.  Shortly after Shanea drove up and it was time to start my lesson. 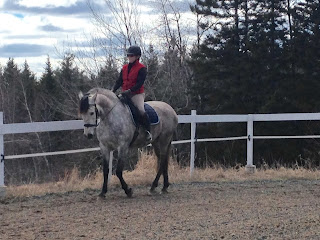