I have so much to write about that I'm just going to give some quick summaries.

1. The Quest to take back C is continuing to work. Yesterday I could feel Carmen actually thinking about what I was asking and that life might actually be better at the far end. It was an incredibly windy day and normally I would expect a ride full of spooks and mini bolts. But not yesterday. I am sticking to the plan that all the work happens in 3/4s of the ring and all the resting in the last quarter. I could feel her actually begin to head that way when she was feeling the need for a rest. I have decided to stick to this plan. Yesterday went so well that after I took her outside and into the tall grass where she grazed without a worry. Before she would stand but not graze.

Caelen is like a sponge absorbing what I'm saying and then putting it into practice. Irish is having a blast too. Yesterday Carmen and I were standing up by C (she was happily resting) and I explained the counter-canter loop to her. She didn't understand the loop idea so I had her trot it first and then I asked her to canter it.
And she did.
Perfectly.
The first time.
So Sis, she needs to start riding at a dressage barn when she goes home. She's a natural.
After they go for a ride around the fields. I grabbed this video of them:

Irish has a bandage on his bandage on his left fore because he has a big sore on his fetlock and the flies were getting in it. I want it to heal first.

3. Olympics: Last night I was playing the video of the Cross Country through my laptop to the TV. It seemed less dangerous then previous courses but I don't know a lot and could be wrong. But a Canadian rider was first and I realized her horse, 'A Little Romance' is half-sister to Irish. So that was cool.

4. I received a special package in the mail yesterday. I entered a contest on Olivia's blog a few weeks ago and I was one of the winners. We got to pick our prize and I picked a stall sign for Carmen. I asked her to use my banner photo but she had other ideas so this is what arrived in the mail: 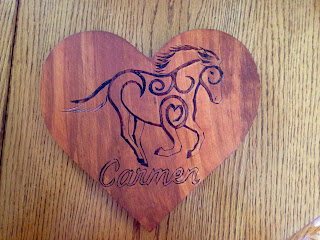 In a letter she explained that she felt it should be a photo of Carmen not Steele. And she was exactly right- Carmen is not Steele. So she took a photo from my blog of Carmen that she really liked and used that. Which is funny because I also love that photo and almost sent that one. And, because Olivia is intrinsically kind and knows the pain of losing a heart horse she added this in: 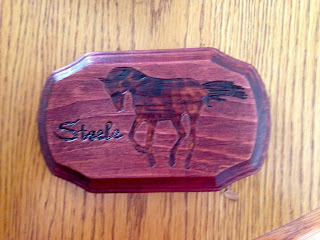 I love reading Olivia's blog and her adventures with her mule and mustang. One day I'm going to drop in- I swear it. There are a few bloggers in California that I would happily invade.

Tonight Karen is coming and Cynthia and I are having a lesson. I cannot wait.