Monday was a much better day weather wise so I decided to ride after supper. I talked Cynthia into coming out as well (not that she took much convincing).

In the barn the horses gazed at us sleepily. Obviously they had different plans then we did for the evening. When I brought Carmen out she was relaxed and stood there quietly. She gave a big sigh when I put the saddle on.

When I mounted she walked off before I asked and tried to go through the reins when I asked her to stop. I backed her up and made her stand where I started. A few episodes of this and she stood still with her ears on me. After that I asked her to walk off and we started schooling.

To be honest I was not riding my best. I felt like a sack of hammers. But I kept trying. It occurred to me that I might be riding the way that I always do - but now I'm aware of how much I suck. Either way I just kept reminding myself to put my pelvis, arms, legs where they were supposed to be. In spite of my less then optimal riding she stuck with me. There were times when she tried to distract me with dangers but I kept to my plan and ignored these gambits. After a while she didn't even try- instead she stayed on with what I was asking her to do. Before she would have blown me off and thrown her fits. Every time she tensed I relaxed and gave her the inside rein. This gave her a place to go and so there was no point in running away.

We worked for about 15 minutes at walk and trot when I brought her up to C to rest. She was resting when she spied an area that the deer had flattened down the night before. She gave a big start and stopped. She then did it again- splayed her feet, snorted and opened her eyes wide at it. I didn't do anything but sit relaxed. Suddenly she gathered herself together and MARCHED up to the area. I didn't even try to stop her to shorten the rein. I let her be brave. She came up beside it, sniffed and then relaxed. I was thrilled- instead of running in fear or me helping her to approach the area , she was brave and I was simply her back-up.

We went back to work and she was with me. I kept the work simple- figure 8s, serpentines and easy transitions. I don't know how long we were riding but I was feeling like we were working together. She asked me if she could stretch out when we were trotting. I haven't really allowed her a long rein because that has led to problems. But I decided to see. I put us on the centre circle and established our trot rhythm. I then asked her to take the rein down and stretch out. In the past when I tried the trot stretchy circle we would lose our shape, rhythm and she would either root or invert. This time she would follow the rein and not root. She didn't stay stretched out evenly, she would pop off the bit and I would just gather her up and ask again. Slowly we had moments of true stretchy circle. While our contact was not consistent our rhythm and shape were. She never faltered or used the long rein to run out of the circle. I was thrilled. After a few minutes I asked her to walk and then we rested.

Cynthia joined me and she dropped the gate. I walked Carmen out first and, instead of turning towards the barn, the turned towards the path we take around the field. She didn't even want to wait for Irish. We walked around and she was strode out like a brave pony. She was curious about things but didn't waver. At the end she came to a halt beside the garden.
This is where we stop and I get my carrot.
Yup, I created this monster- I taught her to go to the garden and rewarded her by picking a carrot for her.
What are you going to do when the carrots are gone? Cynthia asked.
I will probably have to 'plant' some out here I laughed. It seems a small price to pay.

While from a training perspective this ride was not stellar but there was a lot to celebrate:

I hesitate to say this but I think that Carmen and I may actually be connecting. Heaven knows I've been working at it so I shouldn't be surprised but I am weird like that. 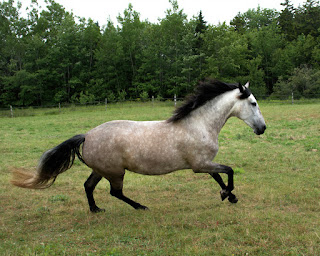