The Secret to Happiness

You know when someone says something that makes you stop and think? Well I had that experience yesterday. Of course you know my tendency to overthink things and sometimes I have too many thoughts. Usually those are not the right thoughts.

It all started with a photo that Caelen took from my lesson the other day. I really liked it so posted it to FB. 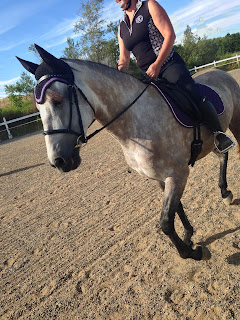 Sue Leffler (the one who did the Centred Riding clinic a couple weeks ago) say it and commented:

Sue Leffler She's really starting to look happy in her work!
Unlike · Reply · 2 · Yesterday at 12:34am

Teresa Alexander-Arab yes, I'm feeling it too-now that she's not worried about all the bad things that can happen she's enjoying it
Like · Reply · 2 · Yesterday at 6:51am

Sue Leffler When we're riding correctly we pass that confidence on to our horses. Her confidence is a direct result of her being able to trust you and your good riding!

My initial response (in my head) was well it's a circle- it's hard to ride correctly when she's spazzing out. I have to get her to be calm first and then I can worry about how I ride. To be honest, I thought that I had even posted something to that effect but it didn't seem to get get on there. I didn't worry about it.

I have not really been worrying about my position but focussing on whether she's attentive and obedient in the beginning. And that is fair because of our history. But I kept returning to her comment in my head and when that happens it means that I am trying to work something out. What if I'm wrong I thought. What if it really is just what Sue said- if I ride correctly from the beginning would it make a difference?

I decided to try it out. Today when I got on I started from the beginning focusing on my position. I did my best to make sure that I was riding as correctly as I could. I kept making adjustments. As usual Carmen started out with a shortish, stiff walk. I didn't worry about it- I just kept my seat following and encouraging her to step more under and through. I kept my elbows bent and ignored any head tossing. I breathed deeply and worked on not stiffening any muscles but not letting them flop either.

Carmen's ear began to twitch back to me and in no time at all was focussed on me. When she was diverted by something else and thought about fleeing I kept myself soft and rode her forward. And guess what? Not.one.spook. At all. Not even at C. She did leave once and we went to work and that was the end of that.

As we progressed I could feel her trying to bulge the middle circle towards C instead of away. First time ever. It was a happy problem to fix. The ride was not long because of the heat and humidity. Caelen was with us and after I dropped the gate rail.
Caelen: Are we just going down to the barn or do you want to go around the field?
My responses was let's not mess with this and just do the safe thing.
Then I thought again- let's try it. If it goes wrong I can hop off and lead her.
With that we went out - Irish and Caelen in the lead. I warned her to stop if she head me say 'whoa' and that I might used Irish's butt as a bumper.

But we didn't need to worry. She was fine. A little tight when we first turned right instead of left. But we walked between the fence and treeline and she was perfect. I even was able to stop and take a photo:

I learned something today- I knew that riding defensively was not helping but I hadn't truly realized  that focussing on  correct riding can prevent issues right from the beginning. I swear that I should have known that but what can I say? It sometimes takes me a while.