I gave Carmen and I monday off. Instead I let her chill while I went to exercise class.

Today I decided would be a ground work day. While she was in her stall I went up and set up a trotting cavaletti and I put an old horse blanket over the fence.

When I led Carmen out of the stall her head was up and she was tense. Irish yelled for her and Carmen replied. I made her back up and then we did some leading exercises up to the ring. When we hit the corner she went flying backwards. Even though I was expecting it, I was caught off guard and dragged back. She had seen the blanket in the ring and to flee was her normal reaction. In the past I probably would have shortened the lead line and tried to make her walk up. This time I put her in a small circle around me, directing her feet. We moved this way up to the ring until she was listening, then I simply stopped asking her to circle me and walked into the ring. She followed me in.

I started with the halt and getting her to put her feet where I wanted. At first she over reacted with my cues but I kept calm and clear and she settled very quickly. We worked down the ring and up the ring working on leg yielding and turn on the forehands. In no time were were working right beside the horse blanket. I let it flap in the wind and when she reacted I ignored and kept working. I'm finding very easy to be calm in all this now that I have a plan.

When I went to start lunging I got the plastic bag out of my pocket. She was standing by me and when I unfurled it she reached her nose out tentatively, touched it and gave a sigh. When I asked her to start trotting around me she went along and did not react at all to the plastic bag.  Once it gave a fierce flap in the wind and she immediately stopped and looked at me.

I want her reaction to being startled to stop, not to bolt. We lunged up and down the ring - by the blanket, over the cavelletti and there were no real fire works. She started very high and tense but rather than  escalate, the work settled her. For the first time I felt that I was truly calm and clear. For the first time I didn't have to use a ton of pressure to get her over the pole.

I took the plastic bag off the lunge line. It flapped once right under nose (by mistake) and she jumped- but in place. She gave a snort.
careful with that thing.

I then hung the bag over a post to let it flap. She couldn't have cared less.

I unsnapped the lunge line and tried some freedom work. It would be a lot easier with a round pen but I got her to move around and listen to me while perfectly free. Not that she didn't ignore me at times- she did but when she shut me out I upped the pressure. I could ask her to whoa and she would stop and wait for me to direct her again. She even free lunged over the trotting pole willingly.

A very different mare followed me down to the barn. The one I started with with tense, hard and tight.  This mare was calm, quiet and soft.

This work is giving me hope that I can get through to her and help her to be much less wary. 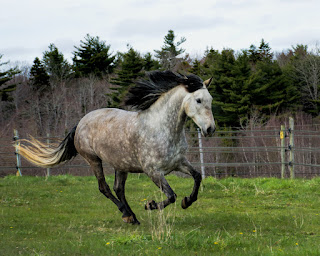