I took Wednesday as a vacation day. Originally the plan was to use that day to get ready for the show. I decided to keep it anyway and enjoy the day. It started out foggy but the sun came out later and it was nice and warm.

I planned to ride (of course) but with one chore or another I kept putting it off. At four I figured that I better get my butt in gear and started to get ready. Just as I was heading to the barn my phone rang- it was Royce. Could he come out tonight after work? YES! I brought the horses in and fed them supper and then prepared everything for the casserole that I planned to make for supper. Somehow in all that I missed hearing Royce's car. I looked out the window and his car was there and so I headed out. He was already in the barn hanging over Carmen's stall. Irish was looking at me with an 'oh oh' face and Carmen was no where to be seen.

When I came closer I could see that Royce had his lunge whip in the stall and Carmen was against the back wall looking upset. I did not jump to any conclusions because I've worked with Royce before and know that he does not have a mean bone in his body. What he was doing (he explained) was teaching Carmen to come up to him in the stall. so when she tried to escape against the back he used the lunge whip to herd her to where he wanted her. I'm going to explain it all wrong but essentially he made the wrong thing hard and the right thing easy- he knew when to apply pressure and when to back off.  And in about 10 minutes Carmen was coming up to the stall door every time he said come up. Irish stayed in his stall and ignored all the goings on.

While Royce was doing this I explained what I knew of Carmen's history and my path with her so far. I explained that she had been to a few homes and when I saw her in February I bought her because I fell in love. He said 'you do not have to tell me why you bought her. I can see why you did' He also listened to me own up to all my mistakes. What I like about Royce is that he doesn't judge. He listens, and he understands that people are doing their best. He tries to help not accuse.

After Carmen was polite and calm in her stall he then worked on her head down cue. He explained that if you ask a horse to put it's head down you have to also tell them to put it up so that it's your idea. This is different then what I had been taught in the past but it made sense. He also talked about teaching the horse to accept having the lunge whip on them is okay and a tap means move. That way they are not afraid of the whip.

After more work in her stall he then put her halter on and took her up to the ring. It was a great day for it- the wind was blowing everything around. I won't be able to recall step by step. And the truth is, it's not rocket science, but it's timing and he has that perfect. He doesn't run the horse, he doesn't scare the horse. He sets up situations where there's a choice and shows them the 'right answer'. Here are some gems:
You have to let the horse make a mistake. That's how we all learn. A mistake is okay because it's a try. The horse will start to look for the answer you want

If a horse is scared don't drive them at what they are scared of, work them to it but have them listening so when they get close they are still listening.

When a horse tries to evade by putting it's head up, hold it's head up and then bring it down. Don't try to wrestle it down.

Horses can only handle two choices- black or white. If you give them a third option then they get upset

I love working with horses like this. Once they understand and want to work with you, you can do anything.

She needs to be taught that there's a better way. She doesn't need to run but she doesn't know what else to do. We will teach her that there are other options.

Carmen was spooky and challenging but not anything major. I watched her soften and listen and relax. When she was startled she started looking for other options rather than running away. Royce could put the whip our and touch the top of her neck and she would put her head down.

On the return to the barn Royce had Carmen going step by step into the barn and then backing out and then walking in. This was so that she wouldn't rush going to the barn (not that she does, I have, after all, done some things right).

He left and I realized that he had been here almost 3 hours. I ran into the house, pulled the casserole together and threw it the oven and then headed back out the barn to do my evening chores. Carmen had some dried sweat on her so I took the brush into the stall to clean her. When I came to her face she put her head up (something I've been letting her get away with). This time I held up her head and then brought it down. She let me brush it without fuss.

That small little seed of hope was starting to sprout. 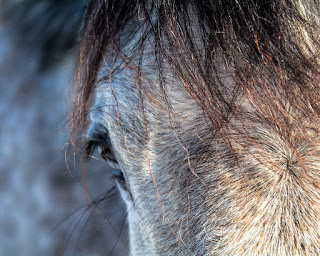