A Break in The Weather

The rain has finally stopped. Which is good because everything is a soupy mess and the ground can't absorb anymore. And not only did the rain stop but the sun is out and it's reasonably warm (for Canada in December). So I made plans to ride every day for the next three days.

My friend Cynthia has loaned me a horse size bridle for now so I don't have to make any decisions. She also had a hunt style bridle but after trying it on, I realized that I didn't actually like the wider nose band on him.


Cynthia came out to ride to. this is a picture I sent her of how Irish was preparing for her. 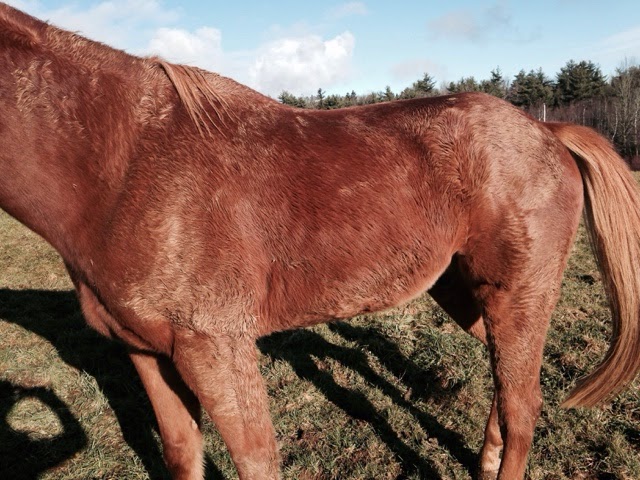 He used to be the cleanest horse but these days he's embracing his inner foal. He had so much mud caked on that I decided to start removing it outside with the shedding blade. I'm glad that I did- there was a lot of dust.

I got Steele ready earlier and headed up to the ring. I wanted to see how he'd respond to Irish coming in after. I could definitely feel that he was excited and I had to regulate his pace a bit but he listened nicely. When Irish came up the hill to the ring he got even more excited but I simply put him to work steering in different ways and walking through puddles so he couldn't be too distracted or do something silly. Irish was also excited and was trotting beside Cynthia as she brought him up. But he's older so the silliness doesn't last long.

After some walk work I asked Steele to trot. He responded with enthusiasm. I was really making use of engaging my core while riding and I find that that makes such a difference in getting him to respond. I'm actually beginning to overcome my tendency to lean forward when a horse is feeling excited and engage my core and lean back as a first response.  (Thank you Jane). A couple times I could feel him getting a bit balky but I sat up and urged him on and that disappeared pretty quickly. We did lots of circles and figure 8s and serpentines. I find that those help keep his mind on me and not on the million other things that he could pay attention to. After some trot work I let him walk and then we stopped in the middle while I coached Cynthia on some exercises to loosen Irish up a bit. Steele loves this part. He stands like a statue and enjoys the rest.

After a few minutes rest we went back to work and I asked for a canter. It was a bit wild and wooly but I've been working on making sure that I'm relaxed with it. He cantered a bit frantically and then broke to trot. I just took a deep breath, regrouped the trot and asked again. Each canter was a bit better. He tends to get a bit excited going down the long side and it's more of a hand gallop (or thats how it feels) but it's easy to ride so I simply try to stay balanced and let him know that there a corner coming up so we probably should slow up a bit. He began to lower his head and blow at the canter. At first I thought it was a wee buck but it wasn't. It was just him loosening up. I hope I'm not cursing myself but he has never bucked under saddle.

It was great schooling session. I'll tell you what we did next in another post.
Posted by TeresaA at 9:28 AM