As I said in my previous post Irish has also been profoundly affected by the sudden loss of his buddy.  We had to give him a sedative in his feed to keep him from running the fence line. This took the edge off but he was still terribly lonely. He spent his day moping by the barn (often in Steele's stall), staring over the fence line into the next field and moping down by Steele's grave. It was heart breaking to watch.  Friends of mine who live nearby offered me a loan of a horse for Irish.  I did not want another horse and I was definitely not ready to see another horse is Steele's stall but that was not the point. The point was that I would be letting Irish suffer because of my own pain. So I agreed.

The next hurdle was going to pick up the horse. The idea of trailering a horse and holding it's life in my hands seemed to be more than I could do. So I called a friend who has tons of experience trailering. He said he would help. When he arrived Ed had the trailer all hooked up. My friend said 'you might as well drive there. I'll be with you.' I looked at him but agreed. So I climbed in. After all, the trailer was empty, what could go wrong? By the time we arrived it was pitch dark and I was trying to figure out how to back up the trailer. Seriously. I back it up all the time but I couldn't wrap my head around it. So my friend asked if I wanted him to do it. I said yes and he backed it up like a pro.

When we loaded up the horse my friend told me 'I'm not sure how to drive your truck so you better do it." That was, of course, a lie that I saw through but decided to give it a go. And so began the slowest trailer ride in history. I was so careful that the progress was practically glacial. But we made it.

Ed was in the barn with Irish waiting. He said that as soon as I drove up his head came up and the dull look in his eye disappeared. I brought in his new barn buddy and with tears in my eyes put her in Steele's stall. 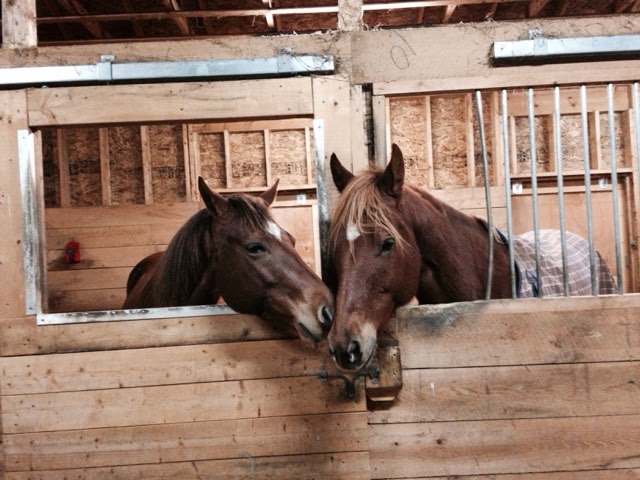 I spied them both staring over the fence at the next pasture.
Lexie: "that looks like good grass over there"
Irish: "yes. It's very good. You will love it"
Lexie: "how do we get over there?"
Irish: "we can't. The servant blocks it off when the weather turns cold. She won't open it until the weather turns warm again."
Lexie: "why can't we go now?"
Irish: "I don't know. She says something about saving the grass and hooves and winter. To be honest I don't really listen"
Lexie: "Servants are weird"
Irish: "Ain't that the truth?"

My heart feels better seeing Irish returning to himself. He and I have been through a lot together over the years and he deserves to be coddled. Lexie gives me breathing room so I don't have to make any decisions soon.