My friend was coming out to ride Irish but couldn't ride until late afternoon. I wanted to make sure that I rode Steele in case it rained. Again. We've had about 100mm in 3 days. This has meant that Steele has not be worked since monday.

This morning I went out and brought him in. He stood in the barn like a pro and was calm while I mounted. The only thing that I noticed was that he was quite forward in the trot. But he didn't spook at anything and stayed focussed on me for the whole ride. The ring was quite wet but not as bad as one might expect given all the rain. 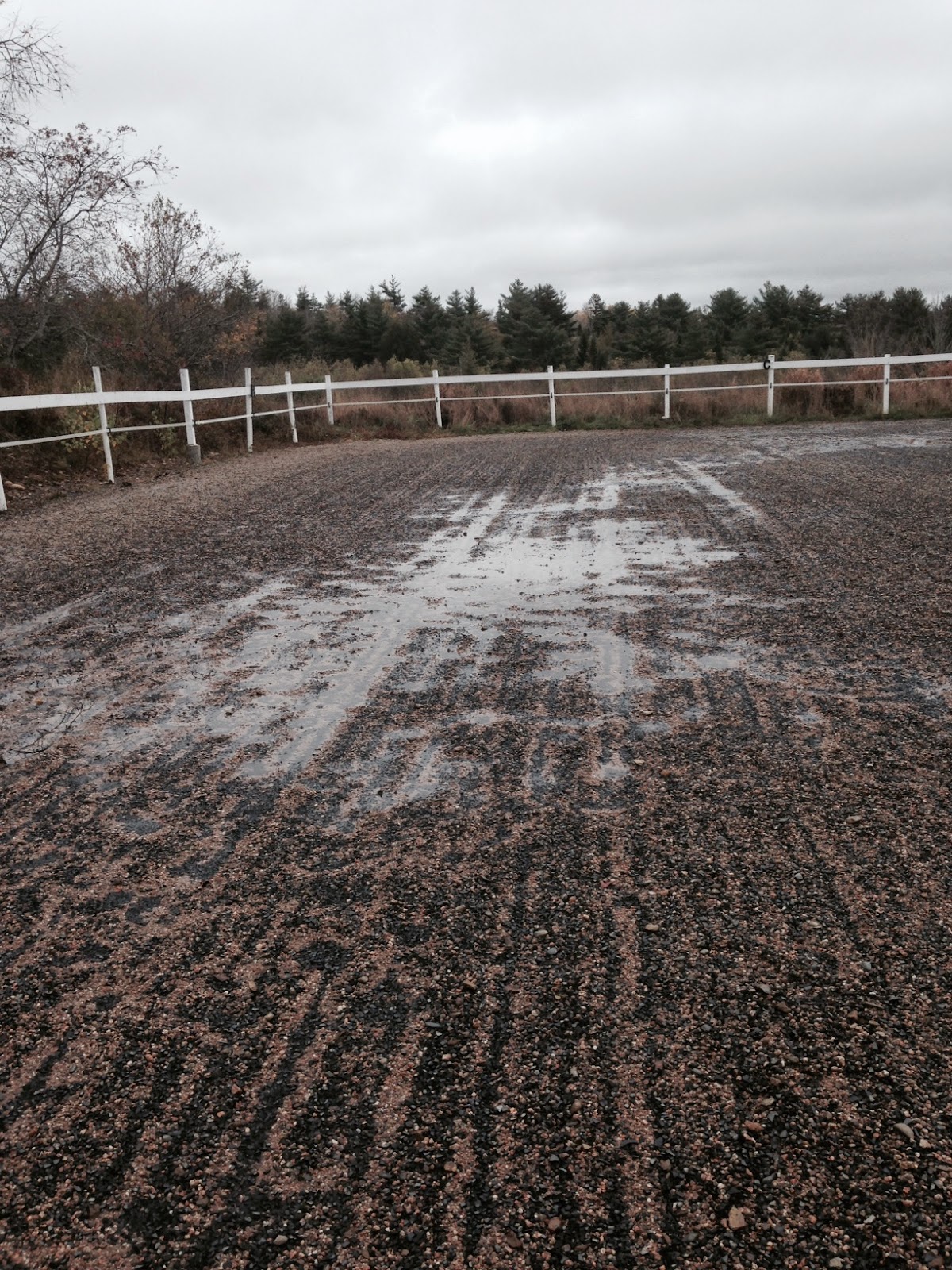 We rode for just about 40 minutes and I put him away. After I dragged the ring and did some chores before lunch. After lunch I headed back out to do some more work (fix a break in the fence, wrap shrubs for winter etc). I heard a ruckus and looked up to see two riders cantering down the road. This got Irish and Steele quite excited but I hate seeing horses cantering on pavement. I don't think that it can be good for their feet or joints. Shortly after Cynthia arrived and we brought the horses in. Irish was quite excited still.

While he stood in the cross ties Steele gave me a look when I put the saddle back on.
"um, didn't we do this already?"
"yes, but we're going again. You're young and strong. And we didn't work hard this morning"
"I'm pretty sure it's only ONCE a day"
"nope. At a show it will be more than once."
"I think I need a union"

Up in the ring I could hear a noises coming from the farm next door- it sounded like the grandkids were visiting and we could hear ATVs and a chainsaw. After I had dragged the ring I set up some trotting poles. I wanted to add in something new to keep his brain occupied. When I entered the ring Steele began to blow and puff up. I looked around and realized that he was concerned about a wheelbarrow. Earlier I had seen that it was full of rain water so I tipped it over.
"hey that wasn't like that before!"
"it's a wheelbarrow"
"is it dangerous?"
"Nope. It's just in a different position"
"well I don't trust it"
And he didn't. He kept a weather eye on it for most of the ride. Initially it was all he could think about. However, walking over the poles helped get his mind back on me. But he was tense and not at all the horse I rode that morning. I just tried to keep my aids steady and supportive.

One thing is that his neck is much straighter and I think I'm getting better with the outside rein. After a bit I decided to try a canter. He was quite willing to canter. If you want to consider leaping forward into a hand gallop 'willing'. I steadied him back and got the trot steadied and asked again. This time there was more control but definitely forward. I moved up to a 2 point and let him find relaxation in the movement and rhythm.  The nice thing about Steele and his canter is that no matter how scrambled it gets I never feel like he'll buck or scoot out. So I have the confidence to let him go and simply work on steering.

We circled a bit and then we went down the long side. I saw him eyeing a largish puddle along the long side.
"have you ever galloped through a puddle?"
"um. no?"
"Okay then, lets go"

We headed down and although I could feel him hesitate when I put my calves lightly on his side he cantered on through.
"wheeeee" I said as the water splashed up over us. We came back around again.
"whee"
Steele "Irish what the heck is she doing? Has she lost her mind"
Irish: "don't worry. Every now and then she thinks she's 12 and that we are Thelwell ponies. Just humour her"
Steele: "well it IS kinda fun"

The next time through I could feel him really stretching out.

After a canter both ways he settled down into work. I ended up by trotting him over the poles. I went up into two point and put my reins steady on his neck so if he bobbled I wouldn't hit him the mouth with his bit. He trotted through like he'd been doing it for months. Not like it was his first time.
We tried it the other way- same thing. So I brought him back to a walk and let him cool down.

It will be fun to do this again. However, between the morning run (5 km), riding twice and the chores I am exhausted. But in a good way.