After Tuesday's qualified success I really wanted to get back in the saddle. However, between weather and work it was Friday before I could ride again. Cynthia came out to ride Irish so I wouldn't be able to test which piece of resistance was due to not having Irish around but that was okay. Having Irish in the ring allows us to work on other things.

If I was to sum up the ride it would be 'uneventful'. There were no big resistances or spooks. He responded pretty well to all I asked him to do. I focussed on getting him forward and working on various school figures. When we first started he really wanted to follow Irish around and kept trying to go where he was. this gave me the opportunity to work on keeping his neck straight and making sure that I was in the correct position. For myself I tried to focus on letting go of the inside rein. Yikes. It's amazing how much you can be on it without even knowing it.

Saturday Cynthia came out again and we rode in the morning. While I was waiting for her to arrive I grabbed my pruning shears and cleared out some branches on the bottom part of my trail. As we were getting ready another friend dropped in for a short visit and took some photos of our ride. I love have friends who drop in with camera in hand.

Steele felt a lot more forward which was fabulous. I walked him for a bit and then picked up a trot. He really wanted to 'go' so I worked on trying to balance him without shutting him down. As we changed direction he leapt into a canter. I decided to let it go rather than stop him. I figured burning off some energy would feel good. It was a bit wild and wooly. I started off in a 'half-seat' so I could stay off of his back. At the canter he really tenses his neck and body. I realized that my body tenses in response so I began to relax my muscles while encouraging him to go. Having the photos by Joanne was fabulous- I could see our tension and then when I started to let go so did her. I love this photo: 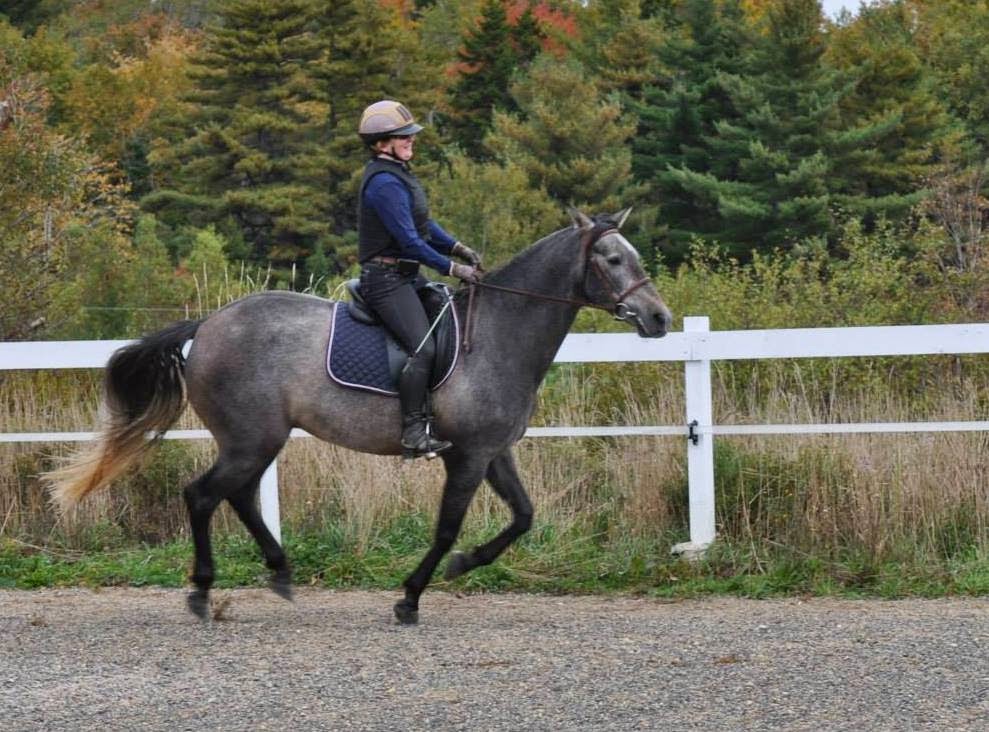 I'm actually sitting back and letting him go forward into my hands. My leg could be more under my seat  but I'm not gripping. I love that he has one ear forward and one back.

After this canter he settled into his work. I kept working on staying off the inside rein and encouraging him to step forward. I could feel him start to stretch over his back and into the bridle. It would last a few strides and then he would lose it. But that's okay- we're getting there.

After our ride we headed for a short hack into the woods. Steele was much more tired relaxed about the whole thing and walked into the woods like he'd been doing it for years. He stopped briefly at the section where there's a swampy-puddle. Once I let him check it out he walked right through.

I love those rides that when you end you just feel good about the whole thing.