After an afternoon and night of rain Sunday dawned clear and lovely. Perfect for my plans. I fed the horses and then went in for morning coffee. After a coffee I went out the paddock. It was difficult to get the halter on Steele. Not because he was resistant but because Irish kept getting in the way. I guess my work on making him agreeable to be caught is working. I finally got the halter on Steele and led him into the barn. After a groom that he thoroughly enjoyed I started to put on his protective boots. It was funny- I put on the first one on his right fore and he proceeded to wave it around.
"um mom? there's this thing stuck on my leg"
I put on his back one. With that the penny seemed to drop.
"oh right. These go on before work"
I haven't put them on since November. He stood still for the other two.

My plan is to start by reviewing all the learning from last year. I don't want to 'assume' that he remembers everything. How fast I proceed will depend on him. So for our first time back I just wanted to review the basics on lunging.

We headed up to the ring and he stood still while I unhooked his lead and hooked up the lunge. He walked off before being asked so I quickly brought him back to a halt and then asked him to walk on. I could see that he really wanted to run off but I wouldn't let him. Once he was walking calmly (all of 2 minutes) I asked him to trot. He headed off promptly and was perfect for about a circle and a half. He then decided that a full bore canter was called for. However, I brought him back down immediately. A few more walk-trot circles and then he got excited again. It all makes sense- it's spring, he's young, the air was fresh and he was full of energy. But I don't believe in letting horses run and carry on on the lunge. It's too easy for something to go wrong. Besides you can end up feeling like your flying a 1000 pound kite.

It really took no time at all.  It was lovely to watch and a bit amusing. When I finally requested that he 'canter' his wole face was 'yes! finally!'  He started to buck. I immeditately brought him back to trot. So the next time I asked he tried it again. I brought him back again. When I asked for a canter and he did a nice depart I gave him verbal praise. The next time I asked he launched like he was jumping a 4 foot fence. I didn't praise him- I waited for half a circle and then brought him to trot. When that was going well I asked for canter. He did a lovely depart that got him more praise. I could see him working it out - he was all excited but he was allowed to run, buck or bolt. How was a young and enthusiastic horse to shake off his tension? He finally settled on a course of action- as he trotted around he shook himself like a dog coming out of the water 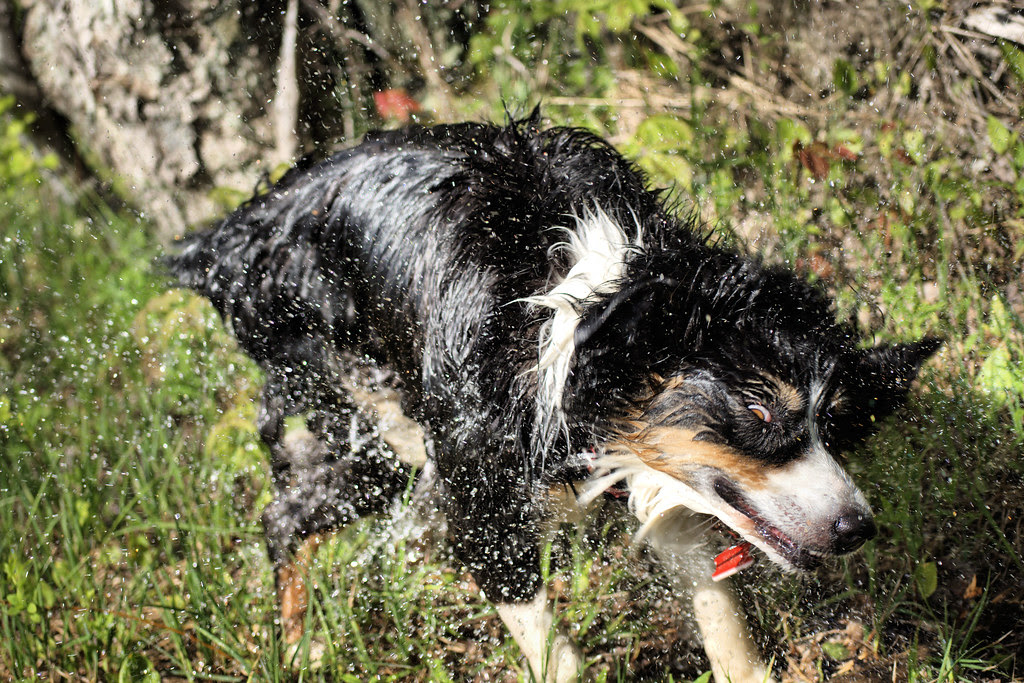 He looked quite proud of himself for figuring out a way. After that shake he settled right back into work. We worked our way up and down the ring - he never once pulled on the line. By the end he was prompt and obedient. I found myself mesmerized by watching him go around. I could see that his physical maturity has resulted in a much more steady rythm and balance.

All of this took about 15-20 minutes. I ended it and we headed back to the barn. I let him have a few bites of the new grass before going in while Irish looked on appalled that he wasn't getting grass. No one can look more affronted than Irish.

In the barn I took off his boots and gave him another groom. I then took his bridle out and put it on. I spent a few minutes getting him to yield to pressure on the bit- it was simple and he caught on quickly.

The whole thing was simple and without drama.