There is a blizzard hitting the east coast of Canada today. It started last night and is still going strong at noon today. Police are advising people to stay off the roads and a lot of businesses, colleges, daycares and public offices are closed. It is a day to hunker inside and wait for it to all be over.

Unless you have animals. They need to be cared for no matter how you feel or whatever the weather. Responsibility is getting up and donning 4 layers of clothing to head out to the barn to feed, clean and otherwise take care of the horses. Love is not minding doing it. Don't get me wrong. The weather has been very very cold: -29 with the wind chill. For those of you on the Farenheit system that translates to freaking cold. So cold that the ends of your fingers get numb despite the gloves and when you come in you start to get feeling back in your face and it doesn't feel good. But despite that I don't mind having to do it. It comes with the territory.
So I put on my layers and trudged though the drifts to the barn. I made sure that their hay racks and water buckets were full and came in for coffee. (let me just say that with these frigid temperatures I am glad I have the heated buckets).

I went out again around 10:45 to check on them. Turns out that horses are not as impressed with the concept of a 'snow day'. 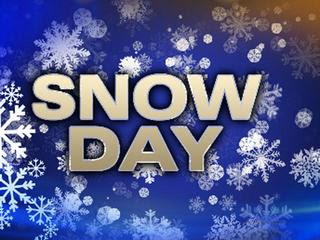 I went into Steele's stall to put on his halter. I wanted to put him in the cross ties to clean out his stall.
uh uh
He backed away. I came to his head again and started to put the halter on.
NO!
This time he shook his head, backed up and gave a little rear.

hmm. I don't think so. I don't really care that he probably wanted to go out and that this was not typical for a morning routine. The reality is that he had no choice in this. The halter was going on and he was coming out to stand in the cross ties. period. I approached him and he reared up a bit higher. This time I was ready and smacked him on hte belly with the halter. He came down with surprise. I stood very still and waited for him to think about this for a second. He blew softly and I came up to him calmly and cooly and put on the halter. Once it was on I led him out and put him in the cross ties. I then carried on with my plans. He pawed while I cleaned out his stall but I ignored that. I did not want to do anything that would escalate. Instead I waited for him to stop pawing and then spoke to him softly.
'good boy'
His ears came forward and he looked at me. I carried on with the cleaning. He started pawing again but this time stopped much sooner. I spoke again. And that was it. He stood there giving the impression of a well behaved equine.

I know that he feels like this being all cooped up: 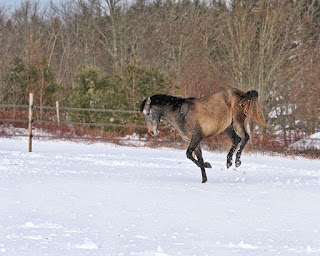 But that doesn't mean that he can be bratty. I wasn't angry with him, there's no point. I believe that you get much farther just carrying on and being calm then getting upset. It's days like this though that I wish I could win the lottery (of course that would entail actually buying a ticket) so I could build an indoor. It would come in handy.

After Steele, I brought Irish out. He too was not impressed but knows how to express his feelings without getting into too much trouble (that comes from being older and more mature he says). I then refilled the bird feeders and hung them back up outside. I wasn't expecting the birds today but they came and I want to make sure that they have some seeds. I threw them a couple of chopped apples too.

In the meantime, I've put a roast in the slowcooker and plan to stay inside.

What do you do on bad weather days?