Last weekend a friend came to visit. Karen knew Steele when he was a baby. I was excited for her to see how he's been coming along and how clever he is.

I should have known better.

You know how children are very good at making you look like the worst parent ever? Like when in you're in the lawyers office going over paperwork regarding the purchase of a new house and your four old boy is trying to scale the book case of leather bound law tomes like it's a jungle gym. As a parent you try to get them down while not coming across like you beat him on a regular basis. Meanwhile the lawyer is chuckling and saying things like 'wow, he's an active fellow isn't he?' and you know that he's really thinking that your child is an out of control whirling dervish and you are a useless parent. And you are saying ineffectual statements like 'come on honey, come sit on mommy's lap' and 'He's really not like this' while thinking 'good lord, how much sugar did the daycare let him have today? And can I pass him off as a step-child and not a genetic relation? Oh god, I am the worst mother ever'.

It turns out that horses are like this too.

Karen arrived right on time and we headed to the barn. While I was giving the tour the horses came in to see what we were doing.
I brought Steele out and gave him a groom. We then headed out the barn to go up to the ring so she could see him move. Ed is puttering around and was just starting the weed whacker so he could get the tall grass around the fence posts. As Steele, Karen and I left the barn Irish decided that the world was ending and freaked out. He bolted out the stall door squealing and kicking and generally carrying on like a fool. Which of course gets Steele all excited beside me and wants to bolt off. I kept myself calm and walked at the same pace while he danced and whirled beside me. Fortunately he never pulled on the lead line although he did spin a bit in front of me. I refused to go around him and made him go back around me to his spot.

Now I separate the two of them all the time and there's not this silliness, especially from Irish. And it's not like they've never seen Ed with a weed whacker before. But Irish was running around like a fool and Steele is completely puffed up.

I smiled weakly at Karen and said 'they usually don't act like this'.
She was very reassuring but I'm sure she was thinking that she had arrived at a rodeo.

Once we were in the ring I let Steele off the lead and he took off at a gallop. While he was running I took down the lunge whip and asked him to move away. He bolted past me and ran down the long side.
'run for you lives!'
As he passed Karen he put in a sliding stop that would make a reiner thrilled and looked at her.
'oh. Hi. '
I had to laugh. He tossed his head.
'sorry, can't talk now, gotta go'
and off he ran again. So I have Steele running around, clearly for fun, Irish behaving like an idiot and I look like the.worst.parent horseowner.ever.
Sigh

After a little bit, the running around began to feel like work and Steele settled into his usual behavior. I was trying to show her how I've been fumbling around with some liberty work. Usually Steele will walk, halt, back up and turn when I ask without use of a lead line. He even follows me over some poles. Except today. Apparently this day he decided that he'd never ever seen my cavaletti's before and he wasn't going to touch them with a ten foot pole. Uh.Uh. I thought. So I had to lead him over twice and then he went over it like before.
Then we were standing around and Steele was getting the affection that he knows he deserves. But he had to push it and tried to bite me. Seriously? He hadn't done that since this episode: http://journeywithadancinghorse.blogspot.ca/2012/07/so-whos-in-charge-here-anyway.html. I of course had to discipline him firmly for this. So Karen got to see me smack him with the lunge whip.
sigh.

But after that he decided to behave. 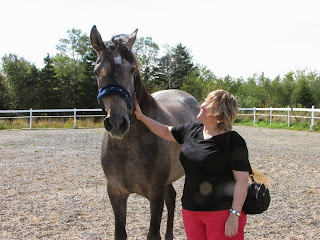 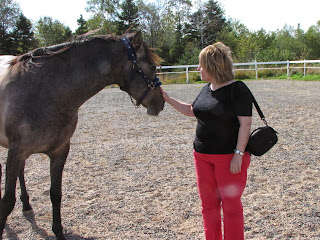 I decided to end on a good note and put him away.

After this we had a cup of coffee and some of my home made banana muffins. Before she left we also managed to track down Martin so she could meet him.


The critters have all promised me that they will be on their best behaviour if you come to visit.
Posted by TeresaA at 2:02 PM