Friday night I headed to bed about 11. For me that is late. I was the first one to head off despite enjoying the conversation and wine. I know myself well enough to know that I am not one of those people who function well on little sleep.

Saturday morning dawned foggy. Which meant that the rain had stopped. 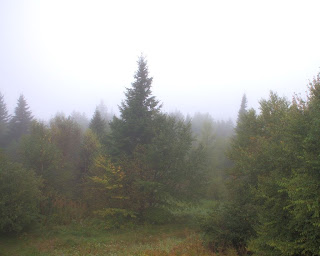 I stumbled down to the living room. Fortunately there was coffee. Suzanne makes terrific coffee. And some lovely lady had brought coffee cream as well. After a few cups and some early morning chats we put on our riding gear and drove down to the restaurant for a hearty breakfast. 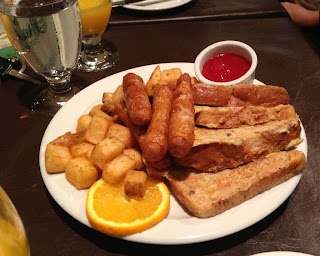 Then it was time to ride. We headed over to the barn and were assigned our horses. I am always a little wary about Trail Ride places. However, these horses were well fed and kept. While they waited the horses had hay in front of them. I found out later that at the end of the day they are turned out into a huge pasture. It seemed to me that they have a pretty good life.  Most looked to be draft, paint and/or QH crosses. They obviously knew their job which was to follow in their place and to keep their riders safe. It's hard to ride a horse and not to try to 'fix' them. However, there is no point. The horse I rode was a nice little paint called Capone. She was sweet and tried hard to please. Initially she was reluctant to canter but I got that sorted. 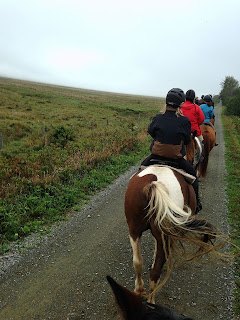 Our trail that morning was up the mountain. As you can see the trails were lovely and well groomed. Part of the ride was across the road and there were people there to meet us and stop traffic so we could cross. 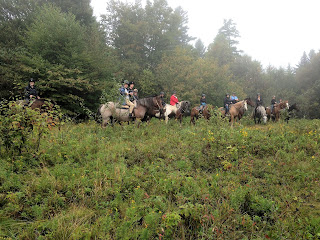 If you look carefully you will see a brown helmet between the roan and the paint. That is me. The ride was about 3 hours. The woods were lovely and it was fun to canter through them. At the end when we dismounted the owner remarked that she saw Capone cantering. 'She usually just trots. She must like you". I don't know about that but I do know that she responded to consistent cues. 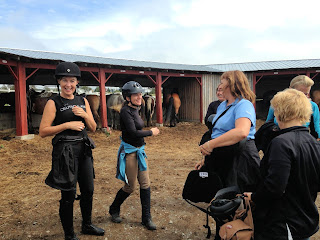 As you can see we all enjoyed the ride. And it was time for lunch. Despite the huge breakfast we were hungry.

Then it was back to the Chalet. The sun came out and while we waited for our massages we made use of the deck and the hot tub. 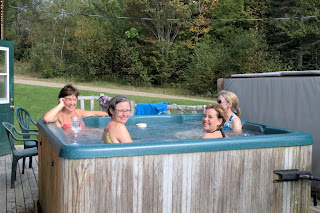 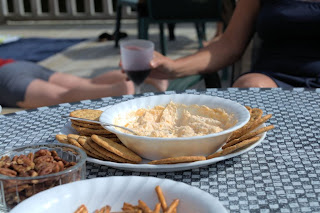 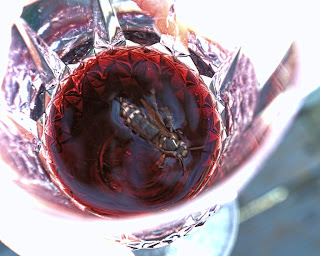 We did have a problem with wasps as you see. We were thinking of heading  inside when someone went and got a paper bag. She twisted the top to make a 'wasp nest' shape and hung it from a nail by the door. We all looked at her curiously (I wish I could remember who this brilliant woman was!). She told us that the wasps think that there's another nest and leave. And I have to say that we say that we saw no more after that. So that was a useful thing to learn.

After a day of riding, eating, getting a massage and sitting in the hot tub I felt completely and utterly relaxed.
Posted by TeresaA at 9:07 PM