I just got back from a weekend off the grid. Let me tell you all about it.

Back in high school I met a girl named Cindy. I think we met in art class but to be honest I can't be sure. I am in awe of people who can remember high school in great detail. Me? I have only the vaguest memories of high school. But I do remember Cindy. She was pretty, vivacious and friendly. And she had a horse. We became pretty good friends in high school. However, after graduation our lives diverged and, as happens with many people, we drifted apart and lost touch. Every now and then I wondered where she was and what happened to her.

Yes, I am getting to the point.

A few years ago Ed and I stopped for supper at a restaurant on our way home from the city and we ran in Cindy and her husband. We chatted for a bit and exchanged e-mails. That very easily could have been it but for some reason it wasn't. We re-connected on Facebook and kept in touch.

I'm getting closer. Honest. I just figured I need to set the scene.

A few month ago Cynthia contacted me to see if I wanted to go away for a weekend with some other horse loving women to a place called 'Broadleaf Ranch'. There was a group of them who ride at a riding school in the city and they went away for this weekend every year. There was a fee that included a chalet that sleeps up to20, all the meals, two 3 hour trail rides and a massage.  I chatted about it with Ed to make sure that the weekend was free. I then thought about it for a while, after all the only person I knew was Cynthia. However, I am fairly social and independent and I figured that it might be fun and I would get to meet new people who love horses. Plus I could bring a book and my camera.

Friday dawned dark and cloudy and there was a rainfall warning for the province. It seems that a Tropical Storm was bearing down on N.S. However, the weather can't be helped so there's no point in worrying, so I drove to Cynthia's. Right before I arrived I received a text: "Front door is unlocked. I am just heading for the shower. House doesn't look like it has been cleaned because it hasn't"
I responded with "lol. I will avert my eyes"

See how supportive I can be. I arrived and the garage door was open with the car boot open. I transferred my stuff (I know I overpacked) to Cynthia's car and headed inside. Just as she came upstairs wrapped in a towel. However, gracious as always she greeted me warmly and headed to her room to change.

Then two other women arrived- Carole and Libby. We loaded up the car and headed out to meet up with another group.In a Tim Horton's parking lot (a popular coffee shop in Canada) we met, chatted, determined the route and headed off in the teeming rain. There was one stop at a liquor store on the way and then we headed to the Ranch. We arrived about 7:00. There were 12 women all together and there were a lot of introductions. I was desperately trying to remember all the names but it turned out that I was not the only one. There were a few of us that were brand new.

You would think that that would make the conversation stilted and a little uncomfortable. Not at all. It's not often that horse crazy women get a chance to talk non-stop about horses to others without having them look for an escape route or, failing that, a sharp object to end their misery. Dinner was served by a cheerful woman named Roxanne. It was huge. I had the turkey dinner- it was wonderful. We then headed to the chalet. By now it's pitch black out but the rain had ended.  Cynthia drove up the side of mountain through woods that closed in on either side. Just when I started to think that she must have taken the wrong road we arrived. It was a mountain chalet all windows, wood and a huge fireplace. 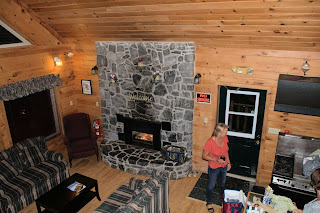 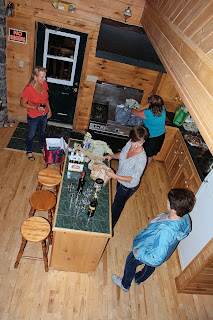 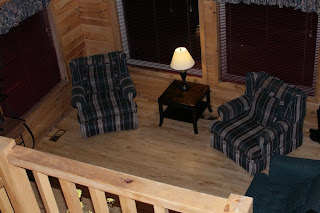 We all chose our bedrooms and then settled down with a glass of wine. 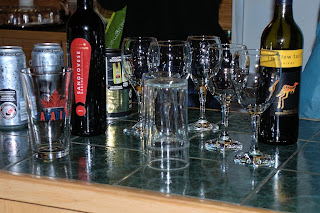 It was fabulous. As I conversed I realized that I was in the company of bright, thoughtful, warm women who loved horses. Turns out thatsome were familiar with my blog and wanted to learn more about Steele ( how was he going to entertain Ed while I was gone),Irish (was he still feeling better?), d'Arcy (had fame gone to his head?), Belle (what was her story?) and Martin. Martin was very popular.  It felt comfortable and that I had known them for years.

Even if I wasn't quite sure who was who.
Posted by TeresaA at 8:35 PM