What's in a name?

We bought our home in September of 2010. We spent a year renovating and moved in on July 2011. Then came the barn, the paddocks, the riding ring, not to mention Martin the Cat and Steele.

But there was one thing missing- a name.

I told Ed that we needed to have a name for our property. He asked 'why'. Not an unreasonable question I suppose.

My response was 'because it's the law. you can't have a farm without a name'.
'But we're not technically a farm. And I'm pretty sure there's no law about a name'.

See- I married a smart man. But sometimes he's far too rational.

The truth of the matter is that our place did not seem to be complete until I named it. But a name is not something to take lightly. So I spent some time thinking. Not deep thinking mind you, just occasional casual thinking. I received input from others from time to time but I didn't settle on anything. I'm sure that Ed believed that I would drop it.

Fast forward to this spring when some friends invited us to a fund raising dinner for a youth Football league. It also included a silent auction and a live auction. It was a lot of fun, the meal was delicious and  I had a few glasses of wine. The live auction was fun and I bid on a few items unsuccessfully. Then they brought out a carved wooden sign. It was beautiful but it was the football team logo. But the next item transfixed me- it was a voucher for a sign of your choice . I decided that I was winning that item. There were a few people bidding against me but I just kept going. Finally there was just two of us- me and a man two tables up. His last bid was nearing my limit but I used an e-bay maneuver- I upped his bid by $1.50.

And I won. I was ecstatic.
Ed looked at me- "now that you won it, what's your plan?"
"I'm getting him to make a sign for our farm"
"Oh you've settled on a name have you?"
"Yes." Of course, I didn't know I had until that  very moment.

I paid for my voucher and the next day I contacted my daughter. She's a Fine Arts student and very talented. I told her my design ideas and what I wanted. She came back with a beautiful design. I asked for a few tweaks and then I gave it to the person to make it. A few e-mails back and forth and a it was done. I picked it up yesterday. 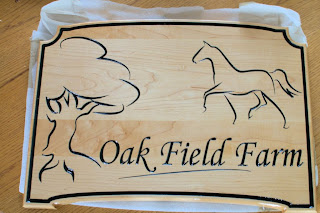 Isn't it beautiful? As you can see I wanted to incorporate the beautiful Oak Tree in front of my house. After all, the tree is why I bought it.And the dressage horse is a given.

And I've incorporated Amanda's design into labels for our preserves: 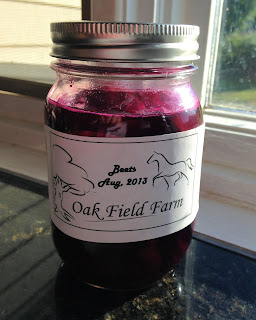